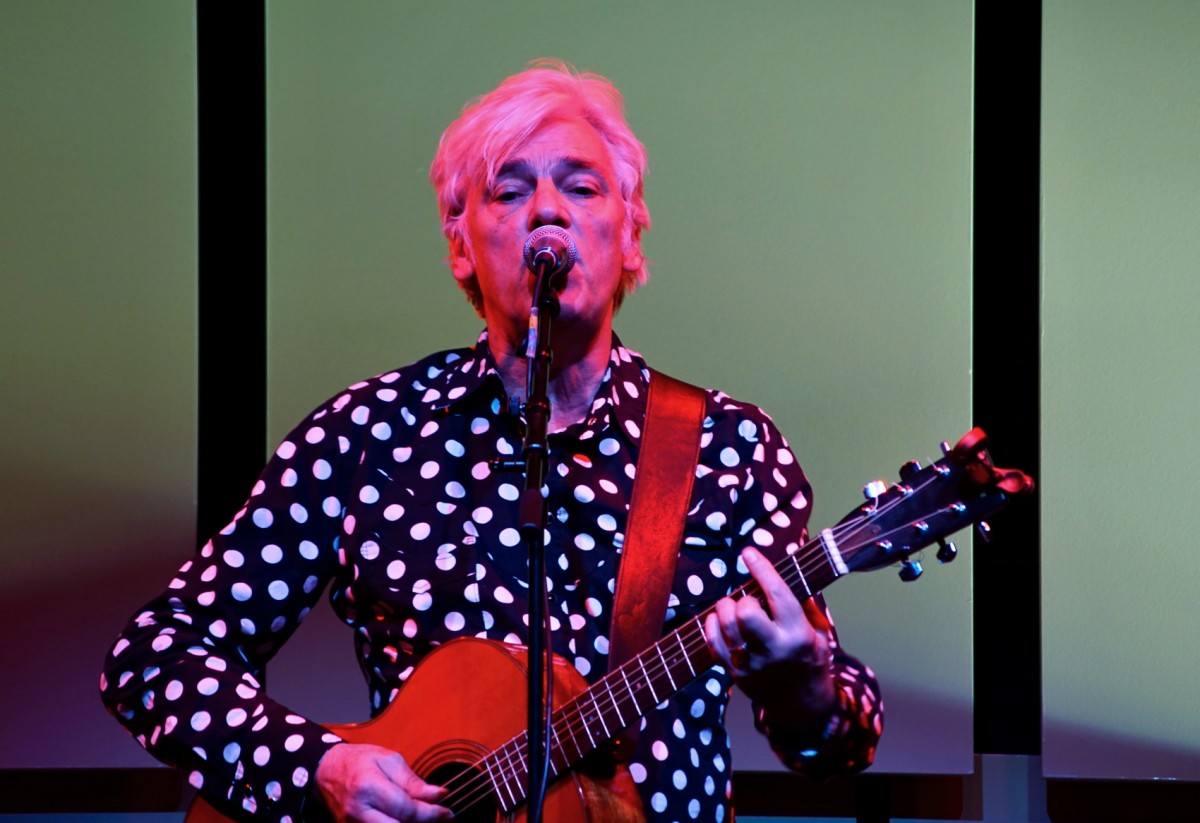 Robyn HItchcock treated Liverpool to an evening of surrealism, humour and songcraft and Getintothis’ Rick Leach reports on a national treasure.

Robyn Hitchcock was in town.

Without sounding too much like the opening line of a pulp Western novel, this was an opportunity to see someone who could be rightly described as a legendary figure.

With a long career behind him, from the inception of neo-psychedelic band The Soft Boys in 1972, over twenty solo studio albums since 1981’s Black Snake Diamond Role, subject of a major film documentary, Storefront Hitchcock, directed by Hitchcock fan, Jonathan Demme, and acting roles in major films, this surrealist poet, musician and artist has covered a lot of ground and gained a lot of fans in the past forty-odd years.

How the genius of Dylan in ’66 echoes down the years

It was no surprise therefore his show at the Music Room at the Philharmonic was a sold out event. There was a narrow demographic with the audience however, a distinct middle-aged spread, in both senses of the word. Everybody seemed to be either grey or bald. Or both in the case of this writer. Of course, when we talk about grey and bald, we are only referring to the males in the crowd. The women were not bald, or not at least as far as we could make out.  (Hitchcock’s surrealist approach is something that, as you can tell, rubs off on one quite easily.)

Although the age of the crowd was limited, with no-one seemingly under the age of thirty, there was still that air of anticipation for the main draw as we watched Australian and now Nashville-based singer, Emma Swift take to the stage. The kids don’t know what they are missing.

She played a short, thirty-minute or so solo set, with just an ‘eighty-year old’ acoustic guitar to accompany her very strong voice. Swift seemed somewhat nervous throughout, despite telling is all that she was more used to playing in noisy bars. It was very quiet; maybe it was because the small venue was all seated or because of where it was, being the Phil- but no-one got up from their seats or made much noise, apart from applauding between the songs. Maybe it’s because we were all so old that we couldn’t easily get up.

Swift’s songs, by-and-large, seemed pretty generic alt-county, although that’s not a wholly bad thing. Maybe it was because of the excellent acoustics in the Music Room, but there was a certain something missing; they seemed to be crying out for the addition of a soft bass, gentle drums and a steel guitar. An excellent cover of Gram Parsons Brass Buttons, showed where she was coming from and  concluding her set with a Rowland S Howard (of Birthday Party fame) song brought her roots to the fore.

After a short break, Robyn Hitchcock, complete in trademark polka dot shirt, a la Dylan in 66, ambled onto the stage carrying a cup of tea, complete with saucer. It may have been a cup of coffee of course, but whatever the beverage, this was as far away from the tired old ‘rock and roll’ (sic) clichés as you could wish for. This was not Keith Richards with a bottle of Jack Daniels clutched in his gnarled hands. A good thing, therefore, and the perfect set up for the rest of the evening.

Opening with My Wife and My Dead Wife, his classic surreal tune about making coffee for a dead wife and a current wife then trying to decide which one he loves the most and which one takes sugar, Hitchcock set the tone for the rest of the show. He’s got such a large and varied catalogue of songs that he could have played for 24 hours, still not run out of tunes and still kept everyone happy.

He’s a very adept raconteur, with long rambling asides between each of his songs, covering everything from Victorian sex, squids, Ken Dodd, Lytham St Annes, trams, wrinkled old prunes chasing young people to eat ‘their pumpkin skin’, the use of tourniquets on guitars to strangle the strings and more. That list is just a flavour of the topics that he managed to cover in 90 minutes. There was much more. He has a perpetual air of bemusement and bafflement, perplexed at the way the world is turning out and how it really is under the surface In retrospect, he could have entertained us just as well by standing on the stage and chatting for that hour and a half. The songs could have been redundant.

But they were not. He played a string of, well, not hits exactly, but his best known tunes and ones which the audience welcomed with open ears. Saturday Groovers, Dismal City, I Often Dream of Trains and Sincerely I Remain, Arthur Kane all got an airing. The latter in particular, a paean to the New York Dolls bassist, showed Hitchcock’s skills as a songwriter. It’s not all whimsy and eccentric English songs about chubb and tench, but shows he can turn out something poignant and tender just as readily as the surreal stuff.

It would be an easy trap for him to fall into, simply playing quirky tunes. There’s a fine line between wild surrealism and being a novelty act and Hitchcock strikes the right balance. For all his head- scratching puzzlement, you know you are seeing someone who knows what exactly makes a pop song work. Deep beneath everything, he is steeped deep in the music and craft of The Beatles, Pink Floyd, Syd Barrett, Dylan, Elvis and the rest.

He ended his set with the brilliant Queen of Eyes, a song that’s so good that it should be Britain’s next Eurovision Song Contest entry. Maybe in an alternative and parallel world it already is and Robyn Hitchcock is taking plaudits from across the EU.

An excellent four song encore with Emma Swift included a stellar interpretation of Dylan’s Visions of Joanna, and Hitchcock declared the whole evening as his ‘favourite ever Liverpool gig.’  We were with you on that one, Robyn.