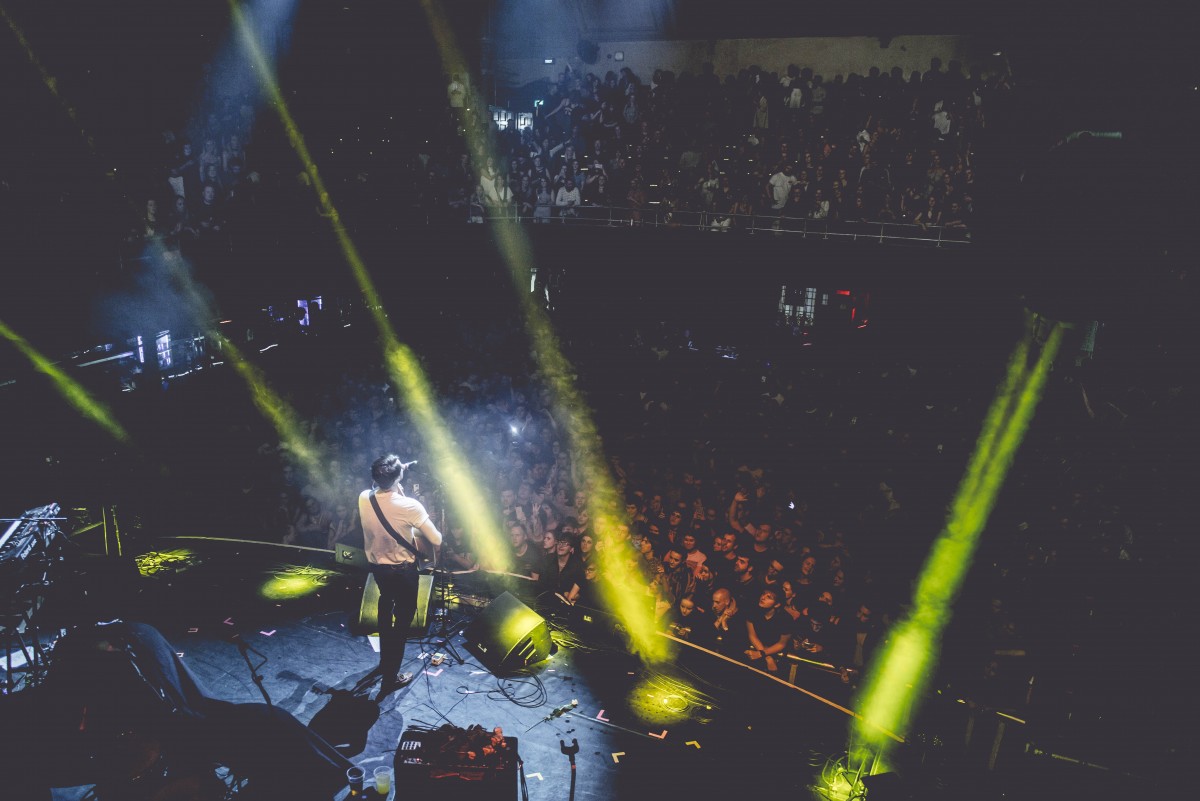 It was sink or swim time for brand new all-day music feast Neighbourhood Festival, Getintothis’ Tom Konstantynowicz has the verdict.

Like an explosion, over 100 acts descended on 11 venues as Neighbourhood, Manchester’s inaugural metropolitan all-dayer, finally arrived having assembled an exciting bill fusing both up-and-coming and established acts, which saw all the tickets snapped up ten days beforehand.

This particular section of Manchester is built for it, the splattering of venues, iconic and new-ish, around the Oxford Road area are a hub of new music discovery for many. The furthest outside of that concentrated epicentre is the five minute walk away Albert Hall, worth its inclusion just for the resplendent rays of sunlight cracking through the stained glass as White Lies take the stage, airing their just hatched, three years in the making, fourth studio album, Friends.

A shame then that some were still lining up round the block to get inside. The most head-scratching, pondered-over conundrum of the multi-venue inner-city festival. Blossoms and Liam Fray‘s popularity would also leave fans out in the street, hoping to get an eventual glimpse, banking on a one out, one in policy.

In reality, what are the organisers to do? Pay through the nose for an O2 Apollo, a vacuous Arena or Castlefield Bowl at the expense of one of the characterful smaller venues more central to the city’s everyday musical heritage? Book bands that nobody really gives one about? Of course not. ‘If you turn up late, you might not get in’ is a lesson worth learning.

Certainly those inside the 02 Ritz for Blossoms will be glad they are scholars of the multi-venue festival as the Stockport lads are looking more like world beaters with each show. This felt like a crowning moment for them, each Manc anthem strategically put through the PA beforehand increased the voltage in the atmosphere and each song in their hour set was sung back to them with almost as much gusto as their predecessors enjoyed in their heyday.

Neighbourhood is an excellently organised festival, and not just for one in its inception year. If it were a ten year old festival it would still impress. Stage times adhered to with military precision, easy wristband collection, free stage time booklet and map, helpful staff.

The freedom, or basic human right, of not having to pay eight quid for a burger is always welcomed in this type of format. If the muddy field romanticism wasn’t so deep-rooted in our culture, more might admit to preferring this style of event. Although, still having to pay £4.50 for a can of lager inside the venues (with the exception of Thirsty Scholar) left a sour taste.

Earlier, the chance to experience a sticky-floored, sweaty-walled, high-octane gig at lunchtime was too much of a novelty to pass up, with The Pigeon Detectives doing the honours of starting many people’s day at Sound Control. Tunes like I Found Out still evoke nostalgia for millennials and frontman Matt Bowman is still a lunatic on stage. As often is, at festivals, the spontaneous sets often provide the highlights. We weren’t even planning to go into Gorilla, but it turned out to be a masterstroke with Mahalia’s personable blend of soul, pop and spoken word offering the perfect comedown to a hectic opening.

The amount of Merseyside-based acts on this line-up of new music speaks volumes for what is happening down the East Lancs right now. Music is always a medium where geographical rivalries are factored out of the equation. Large crowds for Louis Berry and before him, Hooton Tennis Club, who shook off any lingering difficult second album doubts with early airings of material from Big Box of Chocolates, proved that thesis.

In truth, the crowds are fantastic across most venues, throughout the whole day. Courteeners frontman Liam Fray, surprisingly playing the Albert Hall for the first time, is in awe of both his quaint surroundings and his rambunctious following, who provide unwavering attention and chants of “LIAM, LIAM” despite a set only sporadically littered with the early Courteeners classics such as How Come and No You Didn’t, No You Don’t that everyone craved. Another band rooted in this fair city, Pale Waves, haven’t yet amassed a back catalogue the size of Fray’s, but their half-hour set at Underdog filled with reverb heavy, trop-pop licks and silky hooks mean we were wishing they had.

The question of whether the festival was a success will probably be answered when those in attendance rush to snap up their early-birds for 2017 when they are released on October 14. Manchester has a big new music event in town and it is here to stay.

Welcome to the Neighbourhood.