All in the name of a fantastic cause, Getintothis’ Jackie Lees went underground to find a hugely promising plethora of new bands.

The darkened basement of The Magnet played host to the second of Liverpool’s Musicians Against Homelessness gigs, part of a wider series of events taking place nationally with the aim of raising both awareness and funds to support Crisis, the charity for the homeless.

Across the country in this inaugural year, there are over a hundred gigs taking place featuring over six hundred bands. The concept is the brainchild of Alan McGee, record label owner and music industry guru who is most widely known for discovering and managing Oasis and it is his hope that it will become an annual event.

The regional coordinators for the Merseyside dates are Ian McHale and Mark Ainsworth who have had the difficult task of choosing a final line up from the many bands who applied for a slot. It’s really encouraging to see just how many musicians have volunteered to give up their time to take part in these fundraisers.

Arriving slightly late down to contradictory stage time information, we enter to the aftermath of The Colour Pit‘s opening set. Setting up now are The Undecided, a four piece rock band from Liverpool who formed about a year ago and have released their first single, Lost in Translation. They ended their set aptly with a song they’d  chosen to reflect the message of the day called, Don’t Walk By.

Priestley are a band we were fortunate enough to see play at the Warrington Festival Viola Beach tribute the previous weekend. Sam Allen and Matthew Morley originally met at Warrington’s Priestley College, hence the name. Their harmonies are something special with well-crafted songs in a variety of styles. This band will leave you feeling happy and uplifted – you can’t help yourself, and that’s a good night out in our book. Dave Monks recently featured their live set on his BBC Introducing show and they staked a big claim early in the day as one of the standout acts. We also find ourselves unable to resist sharing with you the remarkable fact that Sam, is Johnny Depp’s UK body double!

Cranking it up a notch, with shades of Oasis or The Stone Roses, are Kirby four piece, The Lags. One of their tracks contained a spectacular guitar intro and they worked some great instrumental solos into their set, especially from the drummer who deserves a special mention. Sometimes the accessibility to the vocals were lost within the overall (some may say excessive) volume, however, it was a lively and energetic set from a fresh young band. Visually, the lead singer bears a striking resemblance to a very young Tony Hicks, if his musical career has half the longevity of The Hollies, he’ll have done OK.

The Pages followed with their own crowd in tow who enjoyed lots of banter from the stage, danced enthusiastically, and then left as swiftly as they had arrived. With a nod from front of house, the band were called upon by the organisers to extend their set by a couple of numbers due to a member of one of the later bands being stuck on Runcorn Bridge. They took this in their stride and rolled on admirably into song after song, much to the delight of their fans.

With not an inch to spare on the tiny stage, Shakedown Stockholm – a seven piece band from Winsford including two sets of twins, Davina and Joanna Kettle and Ryan and Danny Smith – ambled up. There is a theory that siblings are able to produce incomparable vocal harmonies and the blending of Davina and Joanna‘s voices would suggest this might be true. The highlight was undoubtedly their song, Who Says I. Coming with a very unusual and distinctive sound perhaps most closely parred with that of Fleetwood Mac, they provide a great set and another standout turn for the day.

Black Pulp are an indie-pop band from Liverpool, different again from the other bands we had heard, they have a radio–ready, instantly recognisable overall sound with very distinctive guitar tones. The single, Vapours, only their second release, is an instant toe-tapper and they looked relaxed and comfortable onstage delivering a very tight performance.

The final act of the day is Rooftop Records protegees Red Rum Club, also from Liverpool. They certainly know how to make an entrance, a band of six, coordinated members, their onstage presence made us do another head count, it felt as if they should be greater in number than a sextet. Their songs are big and were a perfect way to bring the day to a close. The inclusion of a solitary trumpet as a feature brought to mind the early material of The Teardrop Explodes. Their recently released track, Everybody’s Friend left a lasting impression.

Frontman Fran Doran moves around – a lot – but with such spatial awareness that it enhances rather than distracts from the performance. There are some anxious moments when he picks up his left-handed guitar, in very close proximity to the adjacent right-handed guitarist. However, they were clearly well rehearsed in navigating around each other to avoid a collision. Literally and metaphorically speaking, these guys need a bigger stage.

Credit must go to Ian McHale and Mark Ainsworth for pulling together such a variety of acts as everyone left The Magnet‘s sweat-stained basement with a clutch of new discoveries. We were a little disappointed and surprised that more people didn’t come along and stay for the full line up as there were many who popped in for their own favourite band and then left, missing out on new exposures. At £5 for the whole event and in support of such a good cause, it was spectacular musical value for money. 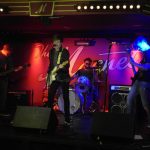 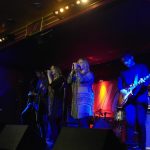 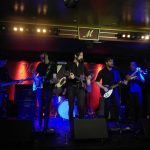 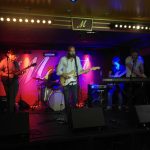 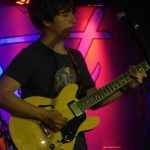 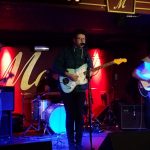