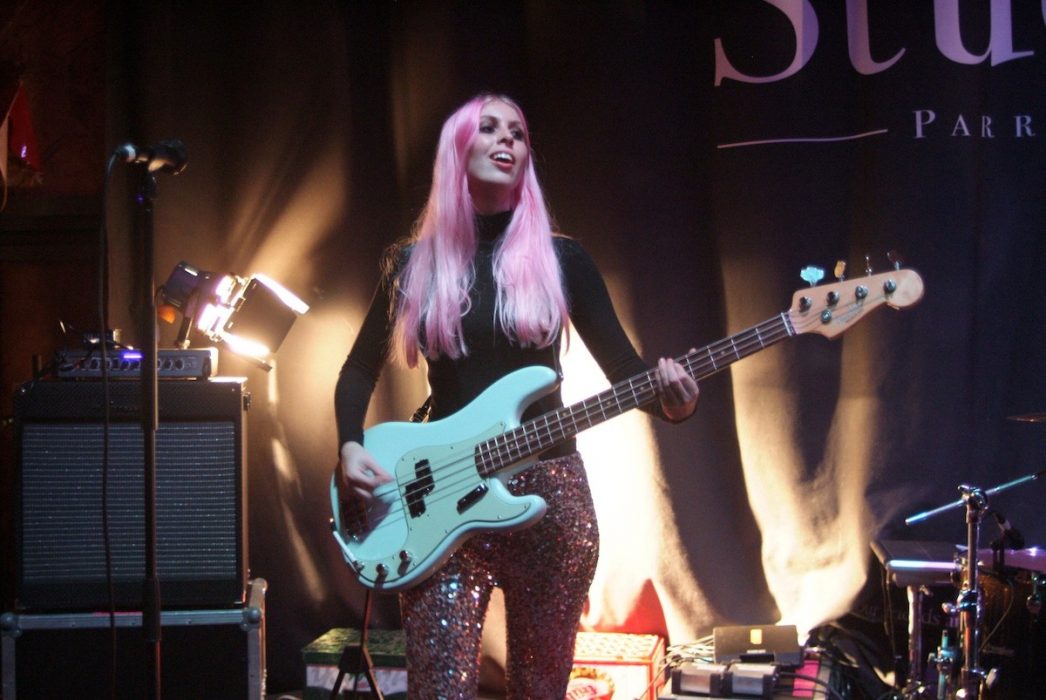 In the cherished venue that is Studio 2, Getintothis’ Ryan Craig comes face to face with some hyped up bands and finds out just what they have in store.

With the festival season is pretty much over, as Liverpool’s Psychedelia Festival closes its doors for another year, what better way to kick away the post fest blues than with a dose of raw indie rock at Parr Street’s Studio 2.

Here to deliver that dose were South London band, INHEAVEN. The night was the quartet’s third trip to Liverpool this year, having previously supported for Sundara Karma at the Arts Club back in June. INHEAVEN have already made waves in the indie scene after The Strokes‘ frontman, Julian Casablancas, gave his approval of the foursome’s music.

However, first to warm up the crowd were fresh out of school trio Back To Basics. Playing to a crowd of only a dozen or so people, the band played mostly cover songs – and that’s not a band thing. With a cover of Chuck Berry‘s classic, Johnny B. Goode (that we will approve on Mr. Berry‘s behalf) and a worthy effort of Pink Floyd‘s Another Brick In The Wall. No song was too big for these boys as Back To Basics lead vocalist and guitarist played the solo’s with immense dedication as the room slowly filled up.

Next on the stage were Liverpool’s own, The Protagonists. Offering a mix of their own songs, a few covers and some questionable dancing, the band drew in a crowd. Showcasing tracks from their latest EP, Girls, proved a winner, garnering a bit of movement from the now near half full venue. The Protagonists were able to add their own mark on Catfish and the Bottlemen‘s track Twice. Without introduction, you’d have assumed it was their own. It matched their style perfectly, a sort of slick boy band look.

Have a read of our in-depth review for Liverpool International Psychedelia Festival!

Pale Waves had gained the biggest audience so far, which is to be expected. The self described band of ‘nineties inspired indie pop feels, drenched in reverb and glitter’ took no extra time jumping straight into their set. And oh how indie pop feels were had. It was clear lead singer Heather‘s vocals were the centrepiece of so many songs, only resting to join in the joyous jangley guitar melodies produced by the band. The likes of The Cure come to mind, seemingly similar in guitar riffs.

The intimate Studio 2 venue became just that as INHEAVEN made their way front and centre, advising all to move closer to the stage, claiming “this is live music after all!“. The buzz surrounding the four piece was easy to see in the crowd of eager bodies, but cheers and whistles became mute as the band blasted their guitars to the first song. We were lucky enough to get a “Liverpool exclusive” in the form of new song All There Is, a more smooth take than tracks such as Regeneration – which was saved for last.

Always conversing with those in front of him, lead vocalist James Taylor knew how to please a crowd. Asking questions, telling jokes and shouting just how great everyone is for even being there. It was after many more thanks that James demanded all photographers move aside to allow each person to get even closer, now we’re virtually on the platform. It was time for the finale. Drummer Joe Lazarus kicked off the beat as the vocals soon make an appearance. Under instruction of the band, most are now bouncing up and down, by far the most energy generated by this partly static crowd.

When the song came to a close, the band gave thanks once more before exiting. A few shouts and jeers from fans suggested that perhaps one more song should be played, but alas, it never happened and the bodies dispersed.

INHEAVEN provide a sort of Jesus and Mary Chain and Stone Roses hybrid sound with a dash of grunge and an ounce shoegaze, all while managing to maintain their own feel. Expect big – sorry, BIGGER things from INHEAVEN. They’re definitely one to look out for.