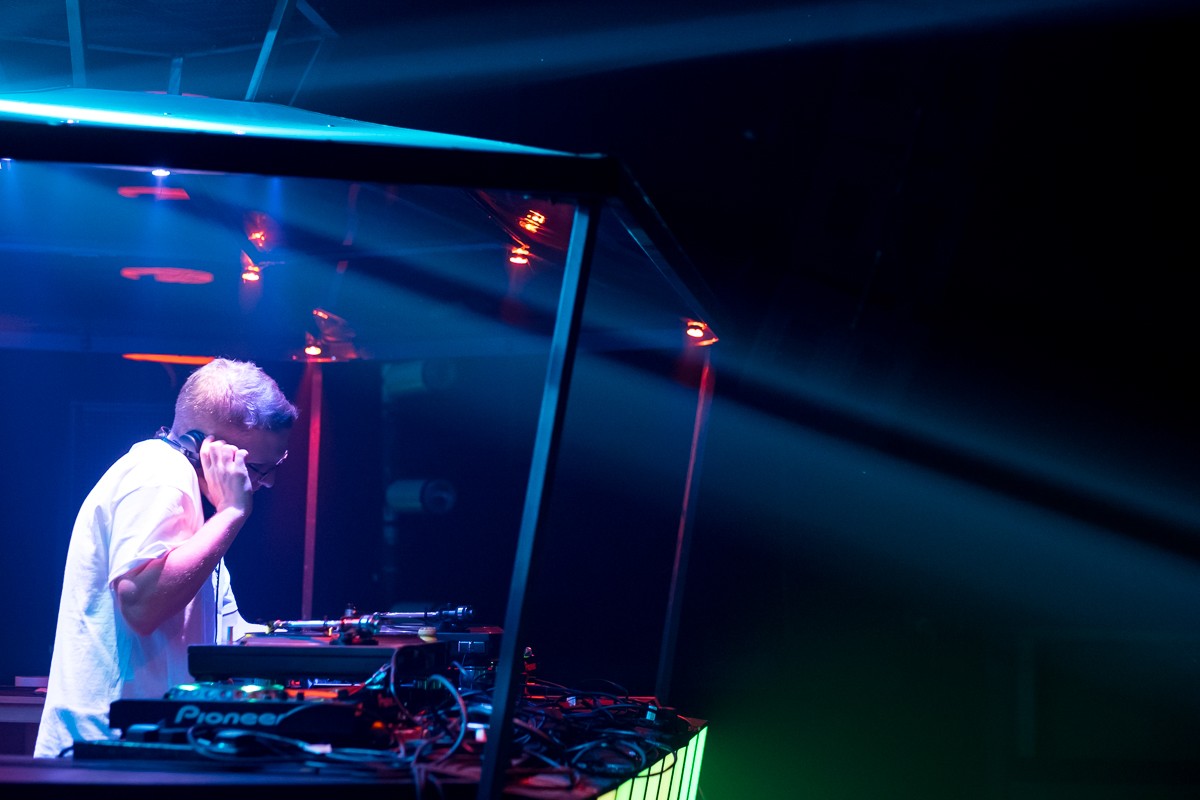 As ENRG brings pioneers of electronic music to Liverpool’s most interesting warehouse, Getintothis’ Amaan Khan reflects on the night.

Significant elements of the modern dance music are said to have originated in a warehouse. Nights like these show that perhaps that is where it truly belongs. Boasting to be the first electronic event to grace the hottest new warehouse-turned-music venue that is The Invisible Wind Factory, ENRG is the name of a series of events centred around electronic music and related aesthetics and experiences. All the events are supposed to have a separate theme which will be a type of energy.

On this night, the first of many, the theme is potential energy. The headlining act, Floating Points, are potentially one of the most respected artists in the electronic music scene. The aesthetics are set perfectly with people covered in lights and lighting rings demonstrating the rise and fall in potential energy. However, before the night takes its full form, it must go through two easily interesting DJ sets.

One enters the warehouse to the welcoming beats of Melodic Distraction. The crowd won’t grow thick enough only until the very end of their set and in a large venue like that, even a moderate amount of people appear too few. And well, rarely is someone comfortable dancing by themselves in the middle of a huge warehouse. But that’s alright. To the regular ravers, it’s too early to dance anyway.

They provide some easy listening chilled out music which perfectly creates a grippingly positive atmosphere. They effectively weave eclectic textures and melodies played on eccentric instruments together with strong grooves to create an ambience you can drift on. No one is bored.

Take a look around the Invisible Wind Factory

However, things really come into force a few minutes before the set of the second act which was Blehrin. Within ten minutes, the venue fills up considerably. The dancers concentrate themselves near the stage, giving the DJs proper audience-to-performing-artist treatment. While the rest concentrate near the bars and there is a constant exchange of members between the two groups.

The majestic fan of The Invisible Wind Factory blows haze over the dancers. Hazy smoke for the audience is a very important and beautiful addition that most venues do not provide. An especially important detail to the success of this electronic event.

Blehrin gets in dialogue with the energy of the audience and provides grooves that are more stronger and more easily danceable. The sound is not as eclectic as the previous DJ set, but more tech inclined. It is all about the breaks now.  There are plenty. While most breaks are gorgeously successful, a few failed to generate the needed response from the audience and instead expose the chatter going on in the audience at such a point, thus harming the delightful illusion the seamless music is creating.

The night is full on happening by the time Floating Points get on and the dancers have worked up a sweat and drank up some tipsiness. The genius in the music noticeably goes up. If Melodic Distraction was about the eclectic vibes and Blehrin about the breaks, then Floating Points is all about those climatic build-ups.

Tonight delighting us from behind the desk instead of with a full on live band as he often does, Floating Points offers some beautifully crafted grooves topped with some vintage tones and songs. Hot horn solos on top of some sophisticated and yet accessible grooves are always welcome. Though essentially electronic, the sophistication is well-crafted enough to present hints of post-rock in the music, a style of music embedded in his roots and well used. The intellectuality in his music goes hand in hand with the fact that he holds a Ph.D. in neuroscience.

All in all, an electronic event like seem to find a comfortable home in the incredibly flexible venue that is The Invisible Wind Factory and the space and aesthetics go on to prove that raves and similar events in the future can be rightfully anticipated.