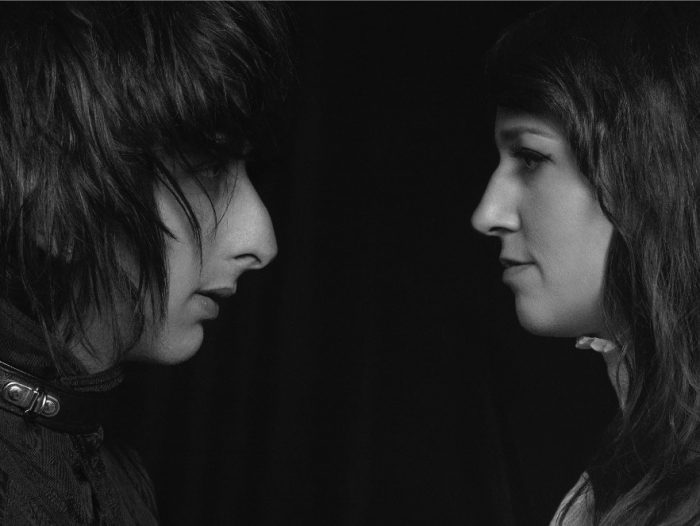 Cat’s Eyes Up close and personal

Liverpool Music Week is upon us and one of the highlights for sure is an intimate evening with Cat’s Eyes in Leaf.

Its one of our favourite venues, you are always guaranteed to get up close and personal with the artists, and Cat’s Eyes lend themselves to this environment completely with their mysterious demeanour, being caught somewhere between the soundtrack to an Italian Giallo movie and Phil Spector‘s Wall of Sound.

When listening to Cat’s Eyes it is difficult to not draw comparisons with Birmingham’s ethereal electro icons Broadcast. That band worked on the soundtrack to Peter Strickland‘s cult Giallo style movie, Berberian Sound Studio in 2012 which was released following the untimely death of their vocalist Trish Keenan. Two years later, Cat’s Eyes were asked to provide a soundtrack to Strickland‘s equally outlandish movie, The Duke of Bergundy. Which makes total sense; Cat’s Eyes are unavoidably cinematic in their style and every song on their new album could easily fit into the soundtrack of an early 70s Euroflick or a cool 60s beatnik movie.

Faris Badwan of The Horrors teamed up with canadian composer and soprana Rachel Zeffira in 2011 and delivered as standout a debut as you will ever hear. This year’s Treasure House is perhaps even stronger. We stole a little of  Badwan‘s time to discuss how the new material came about and what to expect from the Cat’s Eyes live experience and found him in good spirits. Anyone who has witnessed the spectacle that is The Horrors may be surprised by the difference with this work.

Liverpool Music Week is now in full swing! Get all the information you need right here.

Getintothis: With the Horrors there is a definite band mentality, but Cat’s Eyes feels more like a “project”. What exactly is your intention?

Faris Badwan: Cat’s Eyes has never been a band really. We don’t see it in that way and have no interest in being bound by what bands traditionally do. I guess we feel as if it’s easy to get caught up in doing things that are unnecessary, and more importantly boring. Cat’s Eyes is more of a dialogue. It’s a two person conversation. We don’t really have any intentions or expectations. We’re more interested in the unintentional.

Getintothis: Providing a soundtrack for Duke of Burgundy, did you feel honoured or under pressure from following in the footsteps of Broadcast and their work on Berberberian Sound Studio?

Faris Badwan: We definitely felt honoured to be asked to do the Duke of Burgundy score. it was a dream film to work on really and Peter showed total faith in us. It was so different to Berberian that the comparison didn’t really come up. I love Broadcast though – I remember we discovered them just after we’d finished our first record.

Getintothis: How did that work come about?

Faris Badwan: Peter heard our first record and asked us. I guess it’s quite a leap of faith to ask a band to score your film and to be honest most bands wouldn’t be able to do a good job. If Peter had asked me on my own for example I’m not really sure what would have happened. It would have been totally the wrong film for me to do on my own. but Rachel is an amazing orchestral arranger so it worked. Most of the stuff I wrote for it didn’t end up being relevant so I did more on the production side.

Getintothis: Locked in a room for a day what movies would you fill your time with?

Faris Badwan: There must be a limit to how many films you can process in one day… I don’t think I’ve ever watched more than four films in a day and that might have been on a plane. I always watch romantic comedies on planes. For some reason they always seem appealing in that situation. Anyway sorry I’m getting off track – I would probably take The Deer Hunter, maybe a Stephen King one like The Dead Zone or Carrie. I never get sick of Midnight Cowboy, a great soundtrack too. Panic in Needle Park – a good early Al Pacino one. Faces and A Killing of a Chinese Bookie by John Cassavettes, and the Paul Newman film where he eats all the eggs – the name of which I can’t remember for some reason. Luke something? (Cool Hand Luke -ed.)

Getintothis: Your new album feels more melodic – if that makes sense – and uses some really interesting sounds, do you feel your sound is developing into other areas?

Faris Badwan: I don’t really think about it. We write in the simplest form, with one instrument and voice. I guess if I look at the album objectively we maybe tried a few more unconventional song structures out but I don’t even think that that’s a particularly important point. We feel as if we could collaborate forever without it getting boring – as if there’s not enough time.

Getintothis: Be Careful WhereYou Park Your Car is great, very Shangri-las, what were you trying to achieve there?

Faris Badwan: Be Careful.. is one of our oldest songs. Rachel became obsessed with learning the harmonica and the original version had a harmonica intro that was really stupid. It was the last song I expected to reappear and make it onto the record but that’s what’s exciting about the period between demoing and recording – loads of unexpected stuff happens.

Getintothis: How do you feel the live Cat’s Eyes experience compares to your recorded work?

Faris Badwan: We do a lot of other stuff live – Rachel wrote a choral arrangement for The Beatles’ Because which we play, also we do a different version of I Knew It Was Over.. the live set is maybe a bit heavier in places – actually a Swiss journalist recently described the sound as “like the apocalypse”. I guess the extremes are further apart.

Getintothis: So, what can we expect at your Liverpool Music Week appearance?

Faris Badwan: We only plan in advance when we’re trying to break into places so I wouldn’t really be able to tell you.