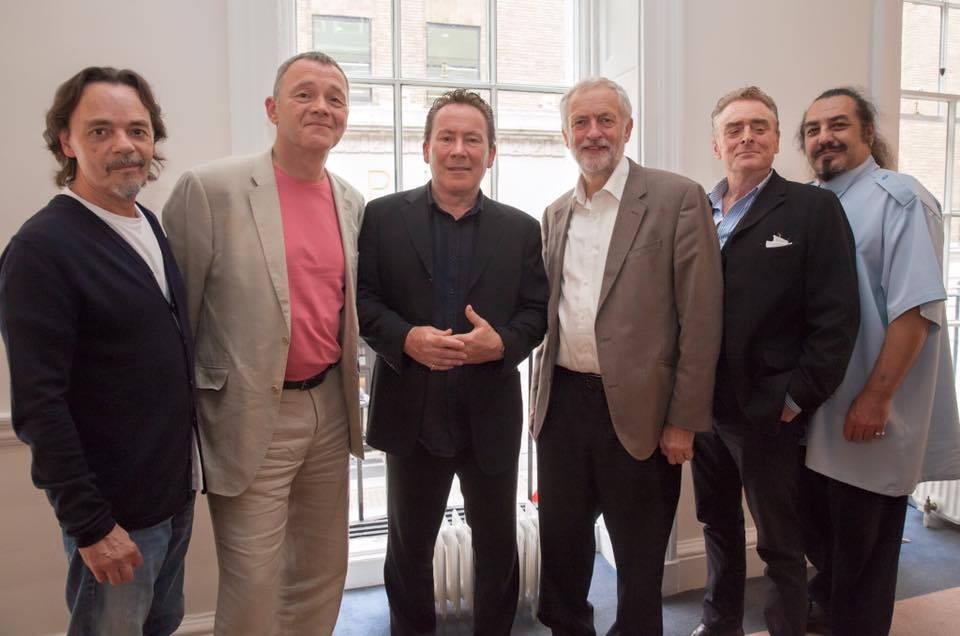 As UB40 support Jeremy Corbyn at a weird press conference this week, Getintothis’ Shaun Ponsonby tries to get his head around it by applying the contradictory ideas of Dada and reason.

Dada was an artistic movement started in Switzerland and flourished following World War I. It was quite the cynical movement, born out of the idea that the human race had no intrinsic value after such an ungodly bloodbath. Therefore, a Dada piece must have no value and no point, destroying art itself.

Let’s think about that for a second; no value, no point and destroying art itself. Does any abysmal Brummie cod reggae band spring to mind there?

Yes, that’s right, UB40. Incredible how everyone definitely knew who I was referring to there, but I guess it is to be expected. Allow me to make fun of people who are way more talented than I and have achieved more than I could ever dream.

On face value, they are certainly a contender for Worst Band In History in my book. So bad, in fact, that I could be talked into wagering that they are actually a Dadaist band, designed to take subtly auto-destructive swipes at all that is good about reggae music. Someone on Fox News recently claimed that the Red Hot Chilli Peppers are the worst band in history. Nope. UB40 are billion times worse than any other band that has ever even had a single rehearsal.

If you have ever heard a shit reggae-ised version of a classic hit, played on a Casio keyboard, sang with little to no soul and zero understanding of either the song’s lyrics or music, the chances are it was UB40. There have been others, of course, but UB40 have a much longer, prouder tradition of shitting over both Jamaican music and classic pop hits of the 60s, often simultaneously.

Maybe it is the optimist in me, who does occasionally take his head out of his arse to think positively before going back to his sad, pathetic, lonely, impotent ways, but sometimes I prefer to think that they mean to be this trite, hence my pondering about their potentially Dadaist origins.

Sadly, Jeremy Corbyn doesn’t seem to be aware of exactly how bad UB40 are, as he staged a frankly bizarre press conference with the band this week.

Before we go any further here – lest I get attacked by the Cult of Corbyn who think of him the way that Matt Healy thinks of himself and attack anyone who criticises him for anything, thereby alienating people and achieving the opposite effect of their overall goal* – I do support Corbyn in theory. However, if a Tory staged a press conference with a band who are basically an embarrassment to us as a nation (think Theresa May with Brother Beyond), I would definitely react to that. Corbyn staging a press conference with UB40 is objectively funny, and just because I support his principles doesn’t mean I think he is Christ re-incarnated and impervious to criticism.

The entire history of Cosmic Slop is underwhelming nonsense, but you could read it here if you could be arsed.

And, yes, I am aware of a media bias against Corbyn and no, I haven’t been brainwashed by it. Believe it or not I reached the conclusion that Jeremy Corbyn isn’t Jesus by myself. But, rest assured, this isn’t about Corbyn anyway. It’s about UB40.

As soon as the official hashtag for the press conference was seen, I knew this would be awkward. #UB4CORBYN is something Chris Morris would come up with to parody this kind of thing. There was something surreal about the whole event, the kind of thing you are not sure is really happening. I think it may have even been the next stage in their Dadaist evolution.

From Corbyn‘s point of view, I can understand why they made a big deal out of this. After all, UB40 are a group of working class lads from Birmingham made…erm…not “good”, but “popular” at least. They were named after Unemployment Benefit Form 40, and their debut album was called Signing Off, which pretty much tells you everything you need to know about their background. With much of the press conference seeming to be based around music, art and culture, it doesn’t take much analysis to figure out what message is being sent.

But of all the celebrities who have endorsed Jeremy Corbyn, it seems odd that he zoned in on UB40. Not just because they haven’t been popular since the early 90s, but because of their recent history.

As many people have noted, UB40 have suffered a similar split to the Labour party in recent years. If you didn’t know this, it’s hard to fault you. Lead singing thingy Ali Campbell left, followed by two other people who aren’t Campbells and formed a rival group for reasons I couldn’t give a shit about.

But the rest of the UB40’s carried on with Ali’s brother Duncan, and Ali said he started up the “NEWB40“, as I have just decided to call them, as he “sat back for five years and watched my brother Duncan murdering my songs,” which is pretty ironic given that he has been murdering reggae since 1978, with that faux-Caribbean accent he sings with, despite the fact that he is from the midlands. Obviously, I assume that is all part of his Dadaist masterplan.

And it seems like the “NEWB40“ don’t necessarily support Corbyn. They released a statement to the press which stated; “Ali, Astro and Mickey have always been great supporters of the Labour party, and they look forward to the new leader taking the Labour party back into government at the earliest opportunity.” Some of the media jumped on this as being an anti-Corbyn stance, but it’s pretty ambiguous. They haven’t outright said “We do not support Jeremy Corbyn”, they just don’t wish to officially endorse him, and there are many reasons why that may be.

But the real problem is, with the move into politics, I can no longer view UB40 as Dadaist performance art. If they are getting political, then it does matter and there is a point. So I now have to take them on face value and loathe them for what they are.

As for Corbyn – last year Cosmic Slop dealt with politicians who pretend to be fans of bands that they clearly aren’t. Corbyn never expressly said he was a fan of UB40, but it still made me cringe. Not as much as when George Osborne claimed to be an N.W.A. fan, or that Owen Smith ice cream gathering, or David Cameron being David Cameron, but a cringe all the same.

*Just FYI, I am in no way saying that is all Corbyn supporters, but it is definitely some, and I’m not saying I don’t understand the response when somebody just outright dismisses him or his ideas without giving it thought. That is all.

Fashion designer Rachel Roy‘s ex-husband has called Beyoncé a “coward” for not revealing identity of “Becky”, but we have already established that there is no “Becky” and the whole thing is a publicity stunt, so it doesn’t matter.

Insane Michael Jackson fans think the gloved one is still alive because his daughter took a selfie and it looked a little like someone was in the back seat, thus leading them to think that Jackson would go to all that trouble to stage his death and then allow his daughter to blow his cover with a selfie on Instagram.