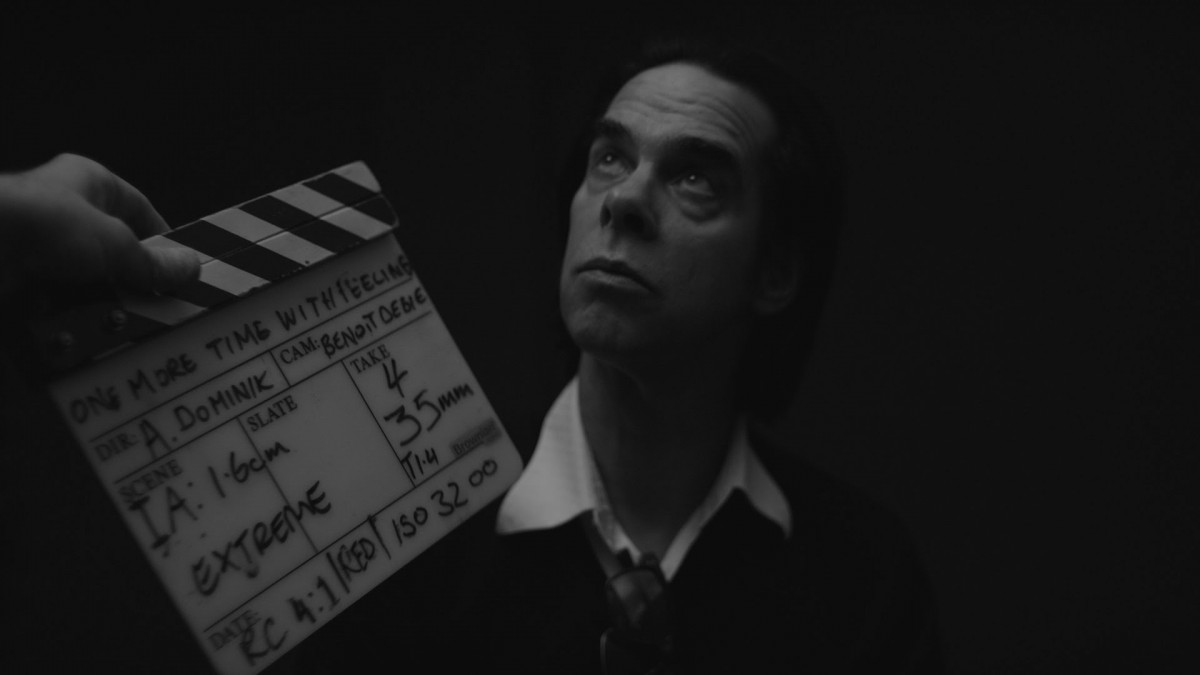 With the first project since the death of his son, Getintothis’ Laurence Thompson finds Nick Cave’s new film stripping away the myth and revealing a man wrapped in grief and loss.

At the turn of the century in Vienna – where, according to Federico García Lorca, there is a shoulder death goes to cry on – Nick Cave gave a lecture ruminating upon Lorca’s concept of duende, the “eerie and inexplicable sadness” that lives at the heart of his and others’ works of art. He opined that it was perhaps too fragile a thing to survive “the brutality of technology and the ever increasing acceleration of the music industry.”

Since then, as if to prove the exception to his point, Cave has produced a novel, two film scripts, and now nine albums, all of which have been either commercially or critically successful. His last album, 2013’s Push the Sky Away, was until now perhaps his most melancholic project. Devoid for the first time of the sturm und drang of Mick Harvey’s guitar and the surety of his multi-instrumental adhesives, this was a kenotic work: moody, echoing, menacing, and broody.

It was, like 2016’s Skeleton Tree, accompanied by a documentary. But there is no useful critical capital in comparing the two: while 20,000 Days on Earth was a peculiar, winking, rather pompous piece of gonzo, Cave commissioned One More Time With Feeling from his friend and collaborator Andrew Dominik to avoid giving interviews to journalists after the death last year of his 15 year old son, Arthur. It’s a film about suffering, pretending to be a film about an album.

The responses to Cave’s work broadly fit into two categories. There are those who take him seriously as a psychopomp of the soul’s Gothic crevices, a successor to Leonard Cohen, Skip James or Townes Van Zandt, and those who eschew this katabatic element and simply enjoy the music with all its dark troubadour trappings as clever and talented camp in the manner of a Tom Waits.

Your response to One More Time With Feeling – and to Skeleton Tree – will depend largely on which division you find yourself in: either, like Dominik, you’ll see Cave’s processing of trauma through his art as being part of a larger continuity, or you’ll be glad direct discussion of the death is mercifully excluded from the film. (One is reminded of Dr. Dre’s correct decision not to address his son’s fatal overdose in the 2011 single I Need A Doctor, a track nevertheless about mortality and mentorship.)

Either way, the omission of the death means it haunts the documentary and the album – reference is made to falling, to umbilicals, to blood, to wombs, to life. At one point, Cave expresses a fear he is losing his voice: “Just file under lost things – my iPhone, my judgement… But isn’t it the lost things that have so much mass? That are as big as the universe?” Absence can be a kind of presence; one thinks of the notes Miles didn’t play, or Hemingway’s iceberg theory.

Nobody can begrudge Cave this project, nor his wife Susie Bick, who is also interviewed. But Dominik’s invitation to share in their grief feels uncomfortable, even if he had the best intentions. He is a good director when his theme is bigger than his film – think Chopper, or Killing Them Softly. When he attempts to convey the grand spectacle, like in The Assassination of Jesse James by the Coward Robert Ford (in which Cave cameoed), the result is a failed soufflé. This is somewhere in between: it works when Dominik stands back, allowing the duende the space it needs to breathe, but not when he cannot resist applying a thumb to the scales, infusing the piece with coal-and-chalk veneers or stylistic 3D set-pieces. Early on he asks Cave a chafing question about how everyone is born, grows old, and dies – banal in any other context, unsubtle and borderline insensitive when put to a grieving father.

Cave’s genius was always a drag act, a conscious myth creation. The women in his songs were whores, Virgin Mothers, killers or pristine murder victims; his male narrators dark, ironic and knowing storytellers. Listening to it as we type, Skeleton Tree sounds different. Cave says he doesn’t believe in narratives any more, and almost hints at an irrational fear that he is on the losing end of a Faustian pact by longing, as all writers long, for something worth writing about, only to find his talents unequal to the resulting trauma. Here, the myth is stripped back to reveal the man – bewildered, suffering, bereft, incapable of distilling his loss into something manageable.

The Bad Seeds, who with Harvey and Blixa Bargeld could once blossom into an oak thrashing against the storm, have now been trimmed back to their barest branches: violinist Warren Ellis, bassist Martyn Casey, drummer Thomas Wylder and percussionist Jim Sclavunos, and it is Ellis’ sorrowful strings that now dominate their sound. One of the movie’s finest images is Ellis composing (summoning? conjuring?) his string section as Cave watches through glass frosted by the film’s mise-en-scène. “What would I do without Warren?” Cave asks, knowing it is now he who holds the Bad Seeds‘ sound together, stretching out their melodies almost to breaking point. When he takes a back seat, the results – like the track I Need You – are mundane.

There is no right response to grief, no handbook for loss. Cave evidently finds this inhabiting of his pain a therapy, but only very briefly. The duende, that “mysterious power we all feel but no philosopher can explain,” never truly leaves. It is not satisfied by sacrifice. It will forever haunt the branches of the Skeleton Tree, the dead willow at the heart of sound.