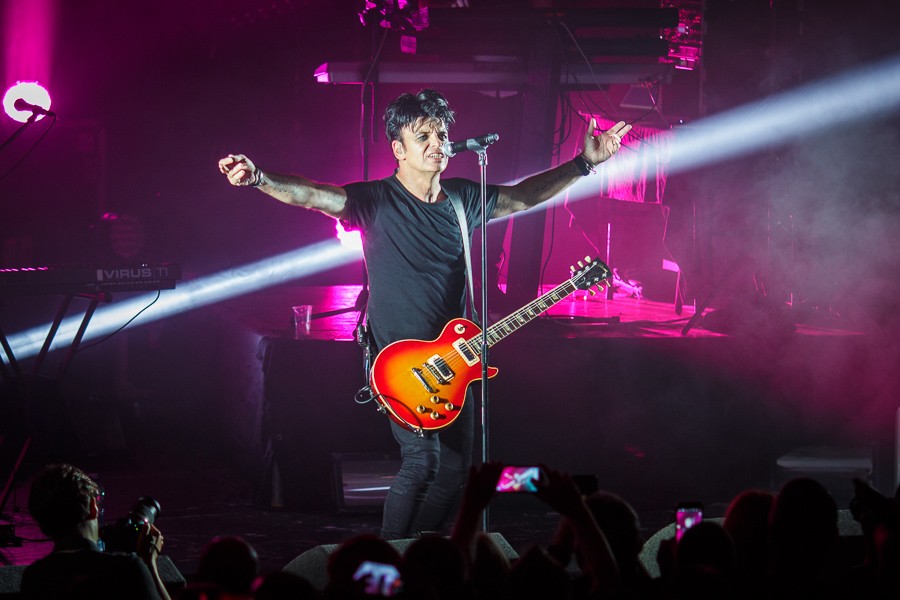 As thousands of Numanoids descend not he Olympia, Getintothis’ Glyn Ackroyd finds himself witnessing a gig that he wasn’t expecting.

Those of us who are not Numanoids and have only the memory of the late 70s/early 80s android image should have kept up – we expected po-faced aloofness but got a thoroughly dynamic performance from an artist who totally connected with his audience despite the only two words he spoke all night being a “Thank you” at the end of the set.

Support is provided by audiovisual duo I Speak Machine, Tara Busch’s musical compositions played to Maf Lewis’s sci-fi/horror movies. Busch’s vocal is buried under thunderous bass and sweeping industrial synth and moves from menacing spoken word to banshee like howls of anguish while various apocalyptic scenarios are played out onscreen. Her voice is scarily beautiful and I know not of what she sang, but it didn’t sound like we all lived happily ever after. Nonetheless, the crowd was on board and after due applause Busch thanked them in demure tones which contrasted sharply with her stage persona.

The (fairly mature) crowd come in all shapes and guises, Goths and metalheads amongst them, all united in their devotion to Numan, whose name is chanted continually as roadies scurry around the darkened stage prior his appearance.

A swirling synth intro loops out amidst a pulsing white light which highlights a packed, expectant auditorium and the band hit the stage to the kind of unconditional applause that only icons are afforded. Numan, clad in black t-shirt, jeans and boots, walks straight to the edge of the stage, raises his arms, and cracks a huge grin as he surveys his kingdom. This tour sees Numan playing tracks from his early, most noted, albums Replicas, The Pleasure Principle and Telekon and he straps on his guitar and kicks off with the title track from the former, it’s trademark melodic synth pattern swirling out over some crunchy guitar riffs and a pounding drum beat, which sets the template for the rest of the evening. And then of course there is that voice, immediately identifiable, a certain vulnerability and pathos in Numan’s delivery, behind that impassive mask. Thrillingly it could have been 1979 – he sounded just like he did on TOTP all those years ago.

Take a look behind the scenes of the Liverpool Olympia

The band, equally attired in black, are dynamic throughout, as is Numan. Forget the motionless, unblinking robot of the early years, Numan here is all motion, striking strings and poses like an axe-god. (Tonight’s show is being filmed so we wonder if there’s a tad more posturing from the band than is normal!) The shapes he throws are beautifully enhanced by the superb back-lighting, Numan silhouetted against a flashing, swirling, probing pyrotechnic display. Certain songs are lit in certain colours: Metal is a fiery red, Remind Me To Smile an icy blue, We Are Glass stained in a shifting pattern of gold and amber.

The pace is pretty relentless and if you like a breather during a set then you’d be exhausted. The tempo drops for a short discordant piano break during The Joy Circuit before building back to the heaviest of metals and the infectious hook and chorus of You Are In My Vision, the guitar hinting at Numan’s original punk incarnation.

Numan keeps things succinct – no chat, each song relatively short. A few tasty repetitions build up and things promise to get hypnotic. They really could extend a couple of pieces but maybe it’s best to leave them wanting more and there are some incendiary climaxes to savour, building to a masterful version of Are Friends Electric?. The opening line, “It’s cold outside”, pointed the way to Numan’s dystopian future and the crowd, somewhat paradoxically, joyfully join in. This is followed by a muscular and equally well received Cars and the mutually assured destruction of I Die: You Die.

Numan has delivered everything your average acolyte could have wished for and has gathered a few converts in the process and he is chanted back out for an encore by an ecstatic crowd.

Gigs like this can only cement the Olympia’s growing reputation as a venue that, despite its size, manages to mix a degree of intimacy with an air of theatrical opulence.