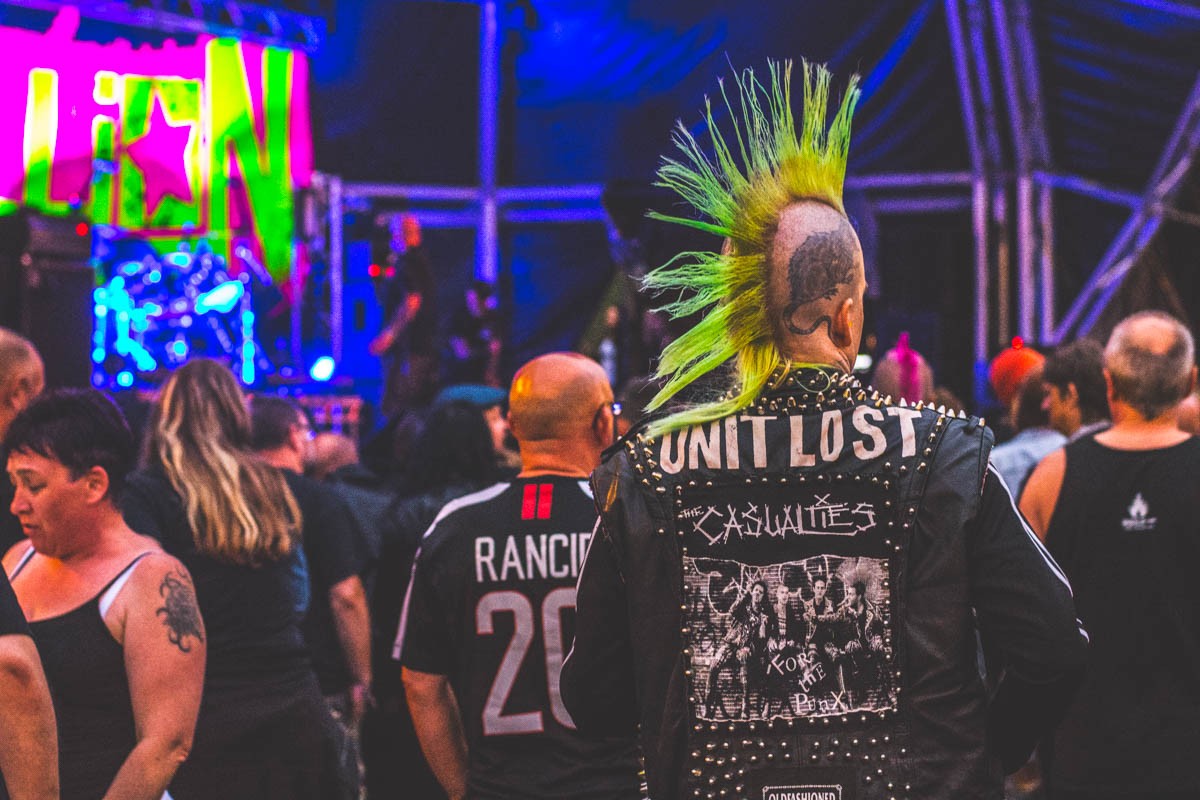 Blackpool is host to a different kind of illumination as Rebellion Festival take over the city, Getintothis’ Vicky Pea gets in the middle of it.

Rebellion Festival just brought several thousand punks to Blackpool to see over three hundred and fifty acts. Would it be a recipe for disaster, or a stroke of genius?

On our bone rattling train journey headed to the seaside we were pretty excited to see how Blackpool would stand up this weekend. Having not been since we were too short to get on all the cool rides part of the appeal of heading to the festival was just a couple of days by the sea to indulge in an ice cream, a good chippy and some air hockey (3 out of 3 if you’re wondering).

Now in its 20th year we debated why one of the world’s foremost punk festivals would pick such a famously ‘chav-tastic’ town as Blackpool as its home. Hopping off the train you already start to see the extent of Rebellion’s stamp on the city, the frequency of punks rapidly increasing the closer we get to Winter Gardens. Then we realise why they chose Blackpool. With original punks as far as the eye can see you already feel like you’ve gone back to ’77, and with Blackpool seemingly stuck there too, it’s an all immersive time travelling experience, net curtains and B’n’B’s with ‘full colour TVs’ included.

Read about how Antipop records are reclaiming punk for a new generation.

Unfortunately, due to everyday life type commitments, we missed Thursday and Friday’s festivities that heartbreakingly featured plenty of acts we’d loved to have seen including the Bouncing Souls, Buzzcocks, Evil Blizzard, Peter Hook and the Light. In fact, if we had one major gripe it would have been that such tremendous acts should have been saved for the weekend so that more people could have enjoyed them, but you can’t always have it your way, so we’ll be concentrating on Saturday and Sunday from here on out.

We start by rocking up to the Rose and Crown to join the mass of attendees enjoying a pint in the sun before entering the Winter Gardens venue where we do a couple of laps to get our bearings, make a few purchases at the market stalls and debate whether to indulge in something from the mash bar. Yes… the mash bar. What an age to be alive.

Aside from the music there’s also interviews, film showings, a tattoo set up and art gallery. The gallery is superbly stimulating with works on show from a range of artists, including members of bands appearing this weekend such as Charlie Harper from UK Subs who was responsible for one of our favourite exhibits – we would have picked up a particular piece of a whacked out stoned cat if it hadn’t already been snapped up. A great showcase of the artistic expression that goes hand in hand with the punk lifestyle that is all too often overlooked. 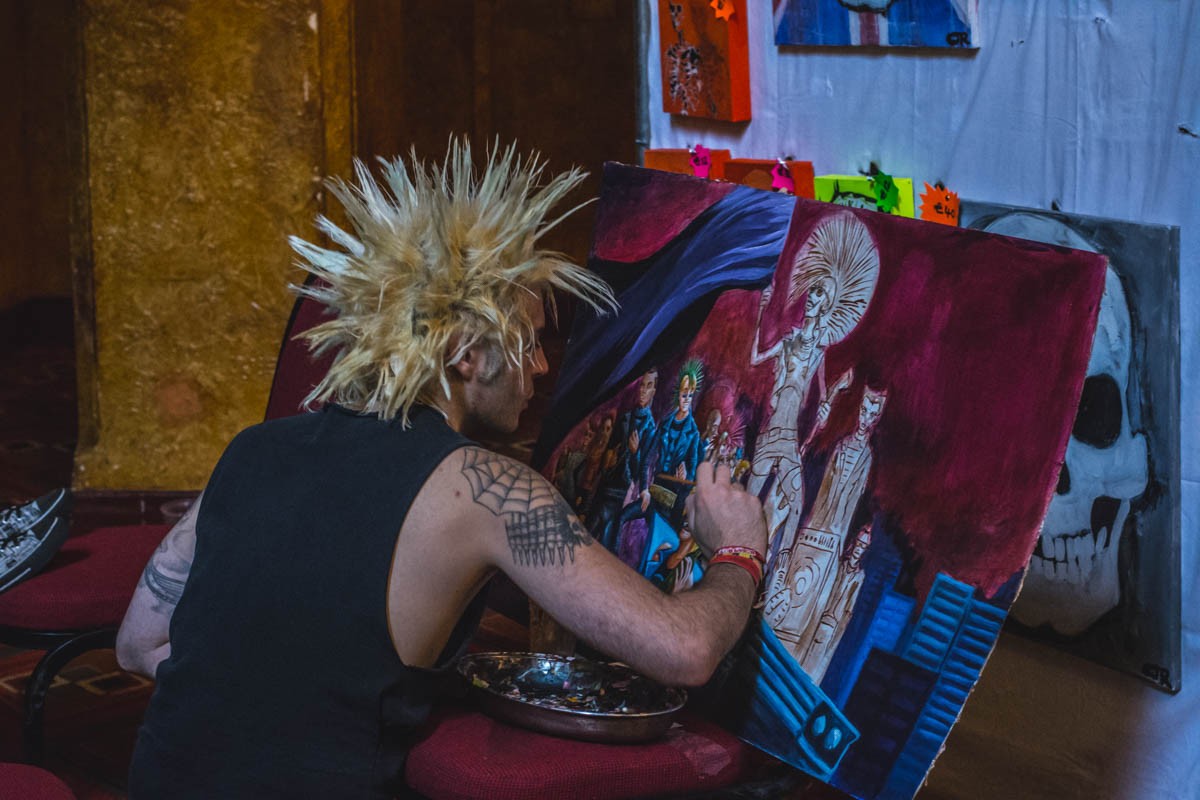 Located bam smack in the centre of town and benefiting from all that comes with it (plenty of food and drink options at a decent price and a choice of transportation and accommodation) the set up sees the famous Winter Gardens host seven stages, including the Almost Acoustic stage and Introducing stage, and for the first time, an outdoor stage just across the road. It’s a brilliant set up with corridors filled with stalls and vendors, and several venues capable of hosting large crowds and massive sounds with no stage bleed at all, all within a minute of each other. The Opera house stage is a little odd as rows and rows of seats are abandoned as crowds push to the guardrail to catch sight of the band about a mile back on the stage. But we really are nit-picking here.

Many of the most interesting moments of the weekend came as we were milling from stage to stage during the early afternoons as we’re taken aghast by the make up of the crowd – and not the face kind. We spoke to a woman who had especially flown in from Australia for the festival, and came across plenty of similar stories. Visitors from Japan and almost every European nation were in attendance as well as groups of families and friends who boast stories from every edition of the festival so far.

A comparison we found ourselves making again and again may at first appear a little odd at first, but bare with us. Out of all the events we’ve ever been to, the one that struck most familiar, was Comic Con. Thousands of people travel ridiculous lengths, meticulously dressed up in their best and proudest DIY outfits to spend a weekend with thousands of similarly minded fanatics. As we walked around the stalls of t-shirts, posters, patches and more the same sentiments we had about Comic Con earlier in the year flood back. Many of the people here probably use this as their big expressive weekend of the year. Growing their hair for the best part of 12 months so they can shave it into a mighty mohawk, probably then shaving the rest off before they go back to the office on Monday morning having furiously stayed up most of Sunday night scrubbing out the hair dye. 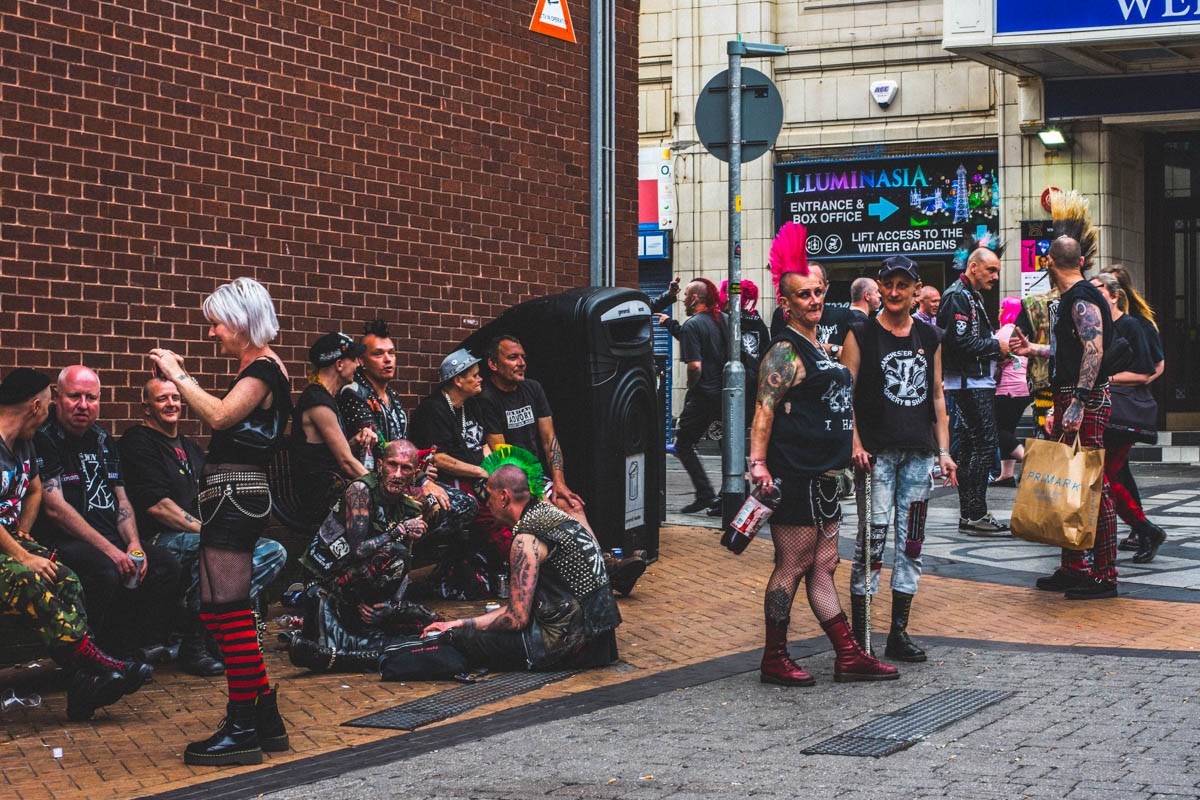 Of course they’re no shortage of full-time punks with heads fulla tatts, safety pins through faces and generally bad ass looking guys and girls a plenty, but we like to play a game of ‘part time punk’ pointing out the ones we reckon have had permission from the wife to ditch the tie and briefcase and let loose and bloody right too, everyone should get a at least a weekend a year to free themselves and Rebellion Festival is surely one of the greatest examples of that we’ve ever been to.

The people were fascinating, the set up luxurious, the sound spot on all weekend and the facilities ample. Any festivals working with a similar sized turnout could do with taking a leaf from the Rebellion playbook. Yes, due to the nature of the music it’s nostalgia heavy, but so was the Led Zeppelin reunion in 2007, and so were all those AC/DC shows last year you were happy to pay £100+ for, so anyone planning on raining on the punk rock parade should think twice. The mohawks will stay up regardless, well at least till Monday morning.

On Saturday afternoon we had to crane our necks to even get a glimpse of Ms Murray as bodies filled the Almost Acoustic area as the Penetration lead singer sat alone, guitar in hand, to wow a captive crowd. A small change of pace to our day and a great example of the appreciation of the quieter and more restrained side of the punk icon.

As one of the punk era’s most politically charged bands not much has changed. With tracks from 2015’s Bullingdon Bastards album their set providing some much needed context to the weekend (although it’s both surprising and worrying how many of the 70’s and 80’s songs are still so relevant when you find yourself singing along) and gave permission to all in attendance to give the world a big ‘Up yours’, not that we needed that much encouragement. 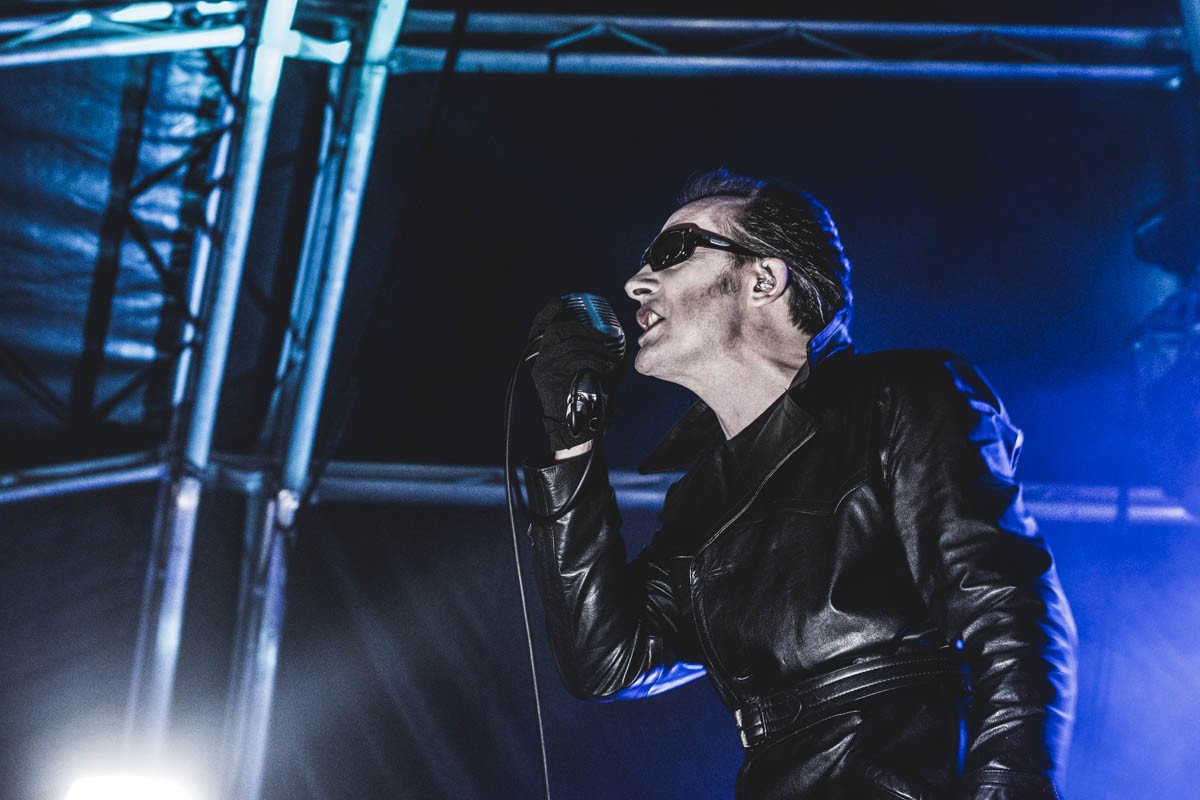 Now. Can we stop trying to decided if The Damned are punk band or a goth band or a new wave band and just start calling them a fucking great band? Because they are. Saturday night ended with a ‘well we weren’t expecting them to be that good’ kind of performance from this hugely influential band. The outdoor Tower Arena was in full lock down as it reached capacity as bodies bounded around to classics like New Rose, Nasty, Neat Neat Neat, finally getting their big release at the finish with Smash It Up. Calls for an encore went ignored as we pass the curfew, but even that wasn’t enough to dampen The Damned.

The Angelic Upstarts on the Tower Arena Stage

A lovely up do