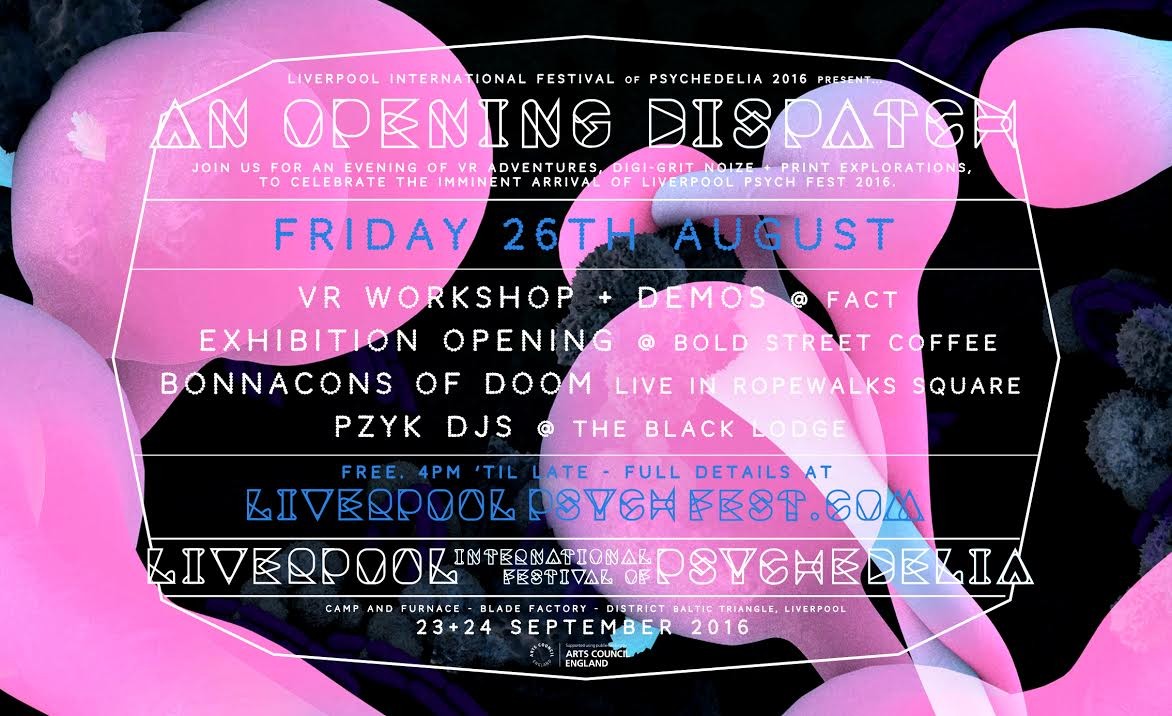 Without wanting to wish away what remains of the summer, having partied our way the likes of Sound City, LIMF and Africa Oyé our attention is turning to Liverpool Psych Fest, now barely a month and a half away.

For the impatient among you who require an early dose of their PZYK fix, we can bring some welcome news: event organisers will be hosting a free evening of audio-visual treats on Friday August 26. Festivities will be centred around the Bold Street and Ropewalks area before relocating to the Black Lodge Brewery in the city’s Baltic Triangle area.

Beginning early evening at FACT is Perambulator v.1, the first of a series of three virtual reality artworks that will launch in the run up to this year’s festival. Perambulator v.1 is a collaborative project between Super Furry Animals‘ (who, of course, are set to headline this year’s festivall) long time illustrator Pete Fowler and guitarist Huw Bunford as well as Liverpool’s Draw&Code.

The evening will feature a showcase of Virtual Reality works in FACT‘s Box screen soundtracked by Bunford in what organisers promise will be “nothing short of a mind boggling excursion into a rather gloriously off-beat other world“. Organisers are giving little away in terms of the content but it seems fair to say that the event will fulfil the kaleidoscopically transportive goals of the festival itself.

In harnessing Virtual Reality, organisers are intent on taking people to places new and introducing them to new experiences. “Virtual Reality makes anything possible. By embracing this technology, we can go anywhere together.” It sounds deliciously bonkers but what it does reveal is the scope of their creative ambitions and surely must set pulses racing in eager anticipation of the main event in September.

From FACT the action will shift to Bold Street Coffee for the opening night of a month-long PZYK exhibition featuring a mix of large scale prints and moving images. Pete Fowler will guest on the decks with an eccentrically oddball selection of tunes. In addition Psych Fest stalwarts Bonnacons Of Doom will no doubt alarm passers-by with a typically drone-infused performance in Ropewalks Square at 9pm.

The late night action will relocate across town to the Black Lodge Brewery which will witness the launch of the brewers’ especially crafted PZYK Guruguru Brain IPA, named of course after the cult Japanese label that will co-curate this year’s festival.

An Opening Dispatch is a one night only PZYK celebration taking place on August 26. Entry is free of charge, although advance tickets are required for Perambulator v.1 event in FACT.

Liverpool International Festival of Psychedelia 2016 takes place at Camp and Furnace on September 23-24 2016.