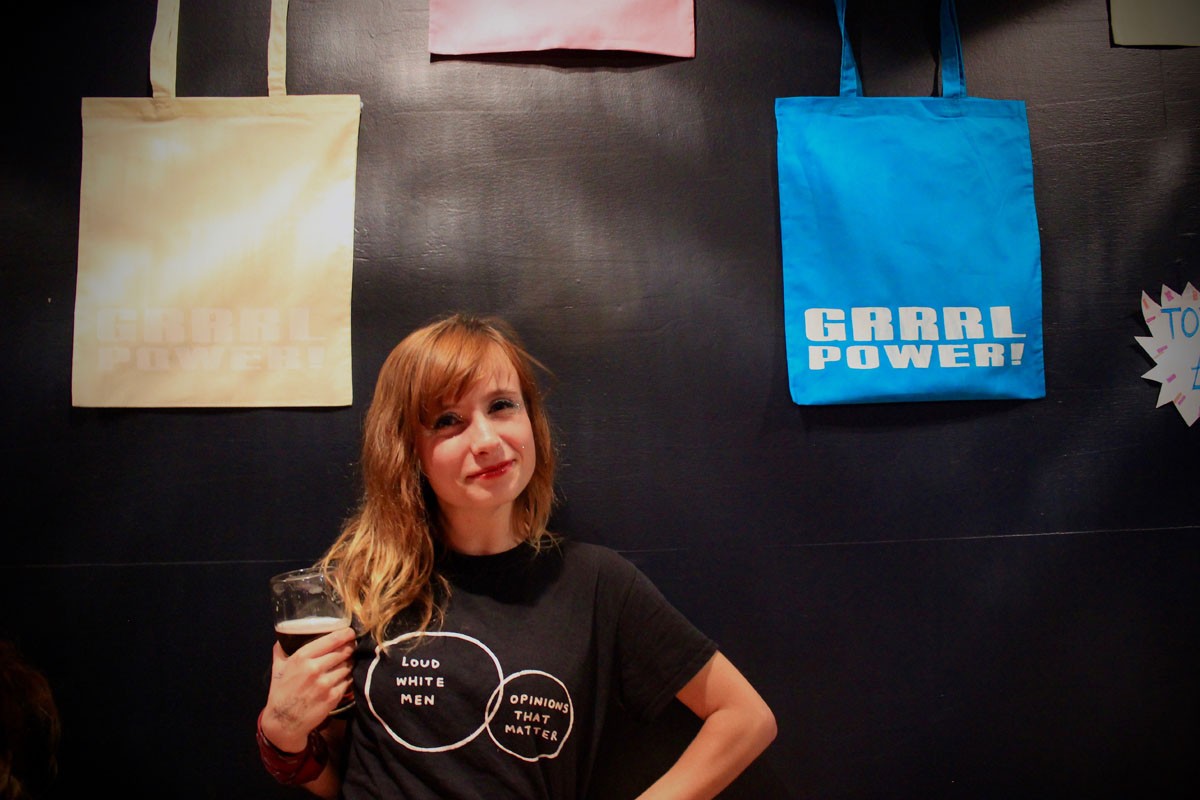 The Grrrl Power Liverpool gang know how to throw a party, and for good reason; there’s a lot to celebrate.

Grrrls Olivia Graham, Michelle Houlston and Aoife Robinson this weekend posed the question “women, where do you find yourself in the arts?” but the focus of this celebration of female creativity was about much more than culture, addressing every day sexism and inequality.

Friday saw the launch of Grrrl Power’s first exhibition at Constellations, featuring work by female artists from Liverpool and beyond. Signposting the venue was Ren Alridge’s Give Us A Smile Love, a gigantic wooden sculpture spelling out the phrase so many of us “stony faced” females are used to hearing from self-styled comedians on the street. 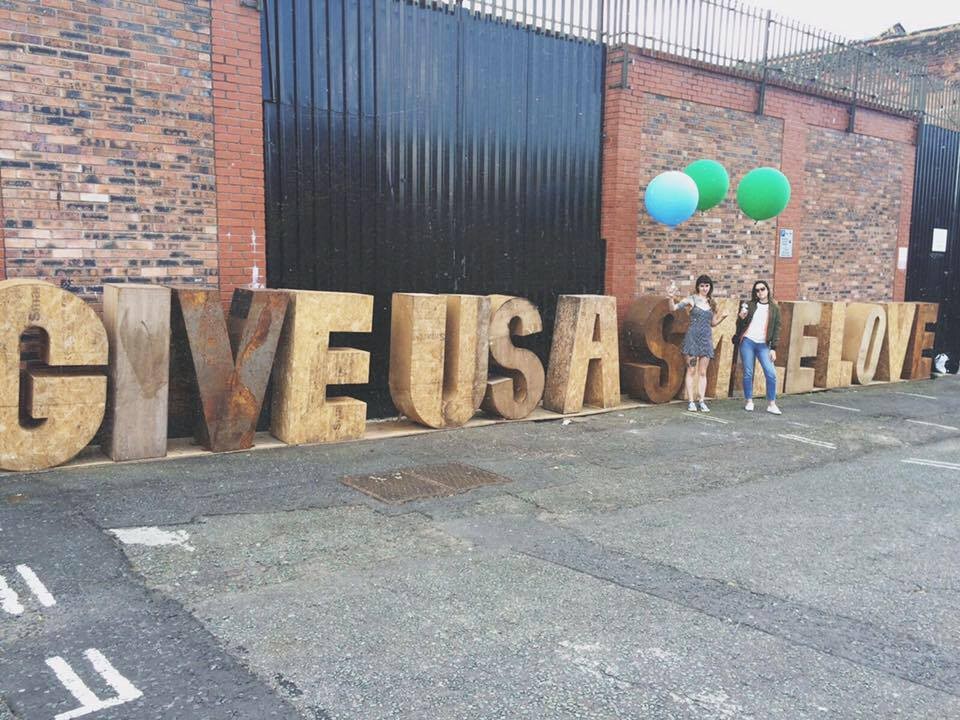 DJ duo Faux Queens presented Status Update, a digital film mashing together collected YouTube clips of make up artists, online celebrities and drag stars applying their warpaint, asking the viewer to consider the pressure for women to conform to beauty standards, and how the vlogging phenomenon has exacerbated this issue and our collective addiction to consuming such mindless content online.

Elsewhere, artist Imogen Woolley presented a new work especially for the show, quite simply (and brilliantly) colour-coding the credits from the The Avengers: Age of Ultron, highlighting the disparity in equal opportunities in the film industry in a light hearted and fun installation.

Elizabeth Brownsword’s prints re-appropriated sexist rhetoric to empower the viewer and poke fun at the slanderer, whilst Juno Birch‘s illustrations encapsulated a rage of negative emotions and day to day issues faced by women through somewhat grotesque and colourful, yet beautiful sketches.

Margie Houlston‘s Leg Room welcomed punters into the gents with a sign reading “Exhibition continues in the men’s toilets”. Houlston‘s work turns the now too-well known phrase “man spreading” on its head with a series of digital sketches showing a woman’s lower body taking over the canvas whilst the males either side squash into the corner.

Simple and effective, the piece highlighted the absurdity of such stereotypes by forcing men and women to share a normally binary-defined space to consider this gender issue. 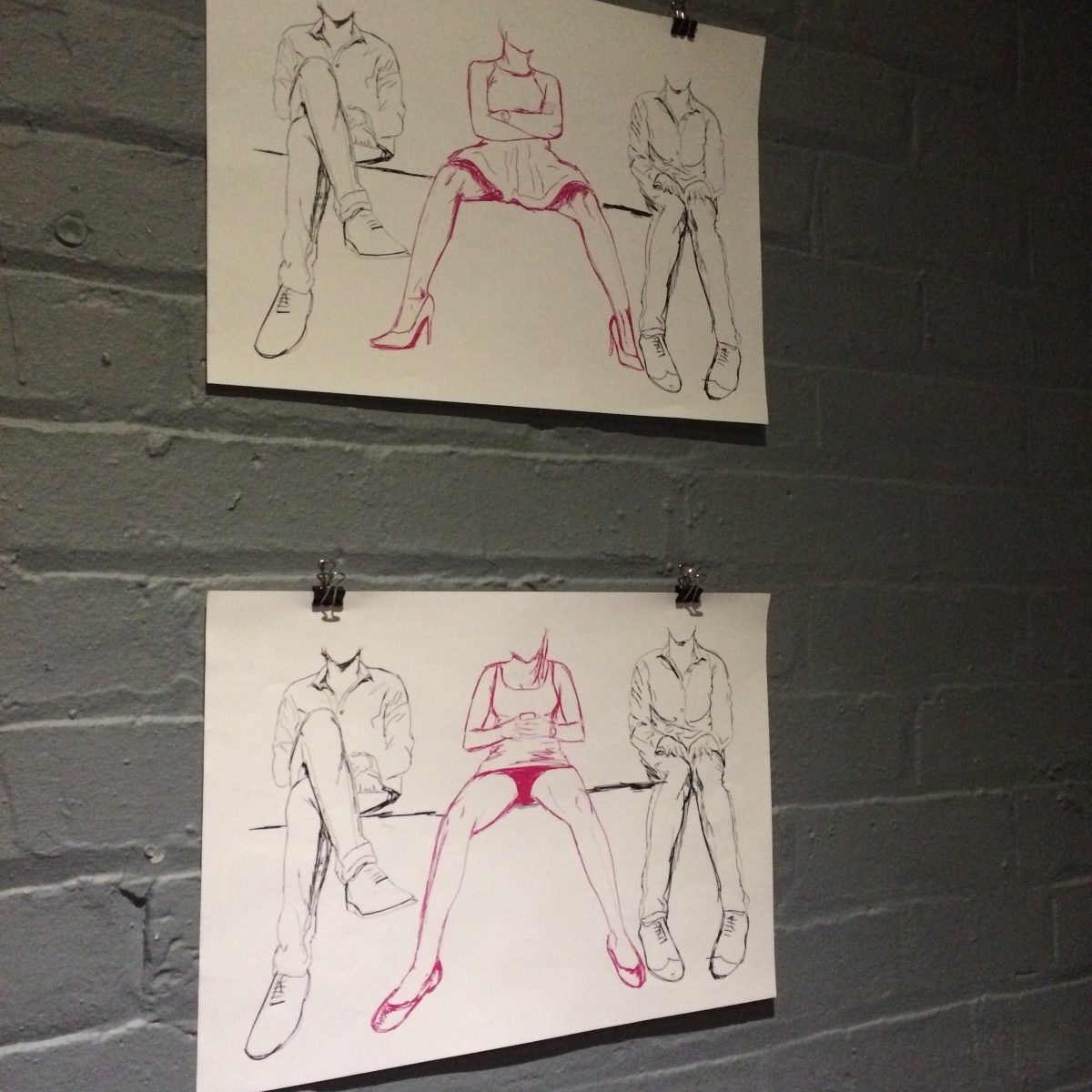 Exhibited artist Ria Fell provided real statistics in her drawing and print pieces.This included the sale prices of the most expensive artworks sold at auction in 2015 by a living male in comparison to a living female artist (Gerhard Richter sold for £30,389,000 while his female counterpart Cady Nolan’s piece sold for £6,172,110). Fell’s collection at the pop-up gallery also made the statement that;

Alongside the exhibition, music was provided by female DJs Jan Lea, JELL and headliners Faux Queens, with organizer Olivia Graham hitting the decks towards the end of the night.

Aoife Robinson told us that “It’s so vital to provide platforms for women artists in the face of unjust gender inequalities. We wanted to engage people in wider conversations surrounding the under representation of women in the art sector – it’s 2016, why is this still happening and how can we overcome the barriers that so many women face? We say let’s work together, build networks, make statements and fight for equal representation.”

The activities continued on Sunday with an assortment of workshops and discussions on offer as well as a Burn Your BraBBQ  in the garden – complete with fire pit for whosoever wished to burn a bra (all done with a nudge and a wink, mind. Who says feminism can’t be funny?).

Throughout the event we found the balance of humor with the tackling of serious issues quite inspired. Grrrl Power Liverpool dismantle old stereotypes of feminism by poking fun at, as well as embracing, femininity. The main objectives were establishing a positive community: creating solidarity amongst the female art community by celebrating one another. 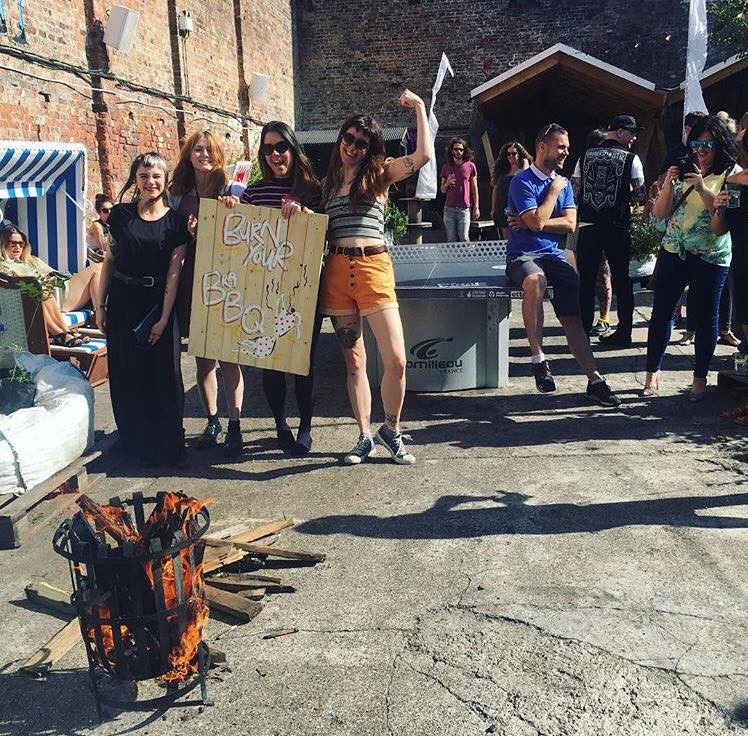 An analysis of modern culture well defined the spirit of the exhibition, as well as the spaces that were created. Queen of the Track are a group mainly known for their zine, but also for developing broader art experiments. Their workshop focused on identifying how a patriarchal society holds women accountable for female behaviour that goes against the grain of its proscribed norms.

One of the speakers, Fliss Mitchell discussed ‘everyday feminist activism’ that could simply be shifts in traditionally feminine behavior, such as not apologising for being assertive, not feeling solely accountable for the emotional well-being of male adults (particularly in pressured environments i.e. work). 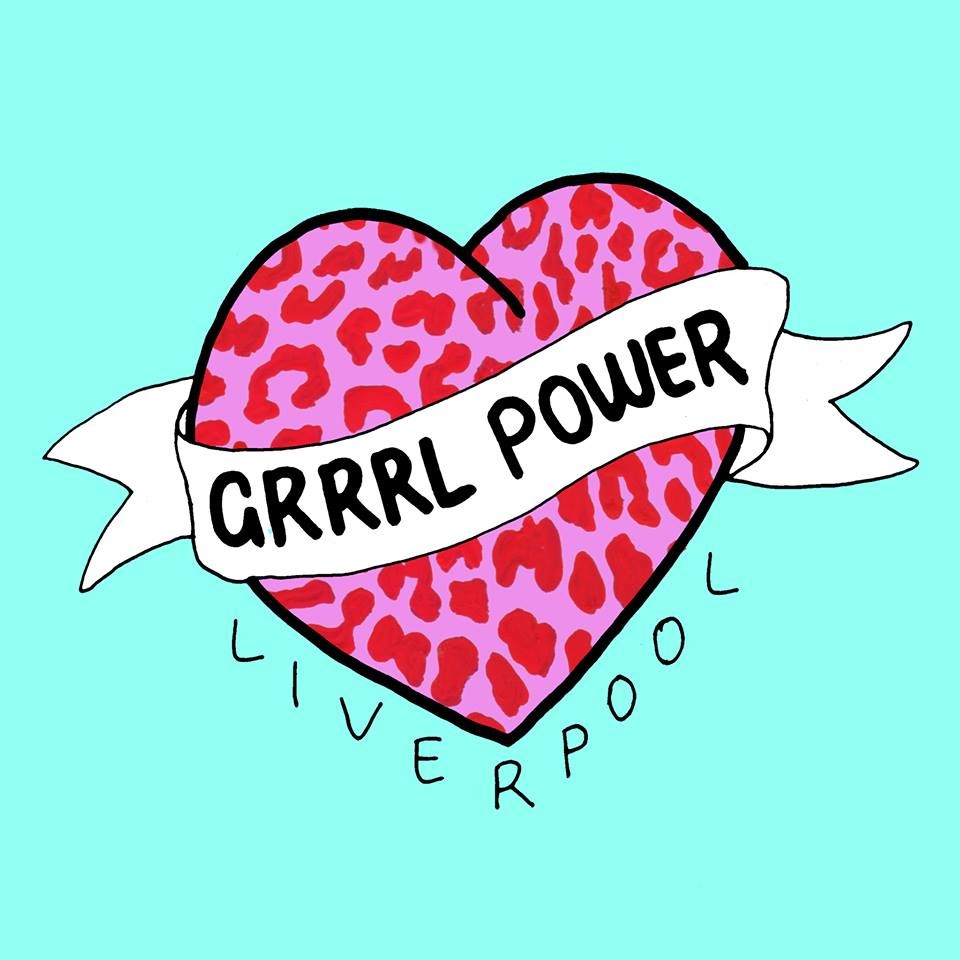 Most notably the workshop discussed the differences in the way men and women physically take up space – particularly on public transport. Fliss recounted her experiences and explained to the group that when her physical boundaries are being unfairly encroached upon in public she makes an assertive statement to the person involved asking them to give her more room. This is a part of her everyday activism.

Like it or not, this is part of a cultural shift and the creation of new cultural norms. It is important to note that the space created for women at this workshop was exclusive. In being exclusive Queen of the Track created a feeling of both empowerment, and an understanding that there is a collective power amongst women to be harnessed and celebrated.

Want to know what art events are on for the rest of August? Then look no further than the Getintothis Arts Diary

Another discussion taking place invited women of colour to consider the question ‘where do you find yourself in the arts‘? Advertised as a ‘safe space’ it was open to women of colour only. Now, we must admit we had reservations.

Well for a start it meant that our friends couldn’t join in and it felt quite awkward being singled out for discussion. Not only that, but isn’t racism, like feminism, is everybody’s problem, everybody’s responsibility? Shouldn’t we all be in on the discussion?

It’s a hot topic, isn’t it – the safe space? But despite our personal opinions, we decided to go in with an open mind.

There were only a small number of women in attendance and situated behind a curtain, sat in a circle, it at first seemed quite surreal. Led by Grrrl Power‘s Michelle and XXY Magazine editor Tahmina Begum the planned hour long talk carried well over into the afternoon, moving from behind the curtain into the garden.

Our reservations melted away and we concluded the ‘safe space’ was a place to initiate bonds or networks that then could be taken outside. The opportunity for women to celebrate themselves in the art community comes not often enough, but opportunities for women of colour come even less so. Scary PC rhetoric aside, we felt the meeting to be nothing but positive and hoped that such a support network in Liverpool will florush.

The spark of Grrrl Power Liverpool was lit by a group of women that have become allies. The art on show over the weekend burnt bright. It gave us hope in the possibility of creating a cultural shift with this type of unity in which women do not divide themselves because they recognise each other as competition, judging each other through the ‘male gaze’, but are activists in their staunch dedication to celebrate one another.

The exhibition will be available to view at Constellations for the next couple of weeks, so get on down! And keep you’re ears to the ground for more riotous Grrrl Power events – as the grrls themselves stated, “this is not over“.