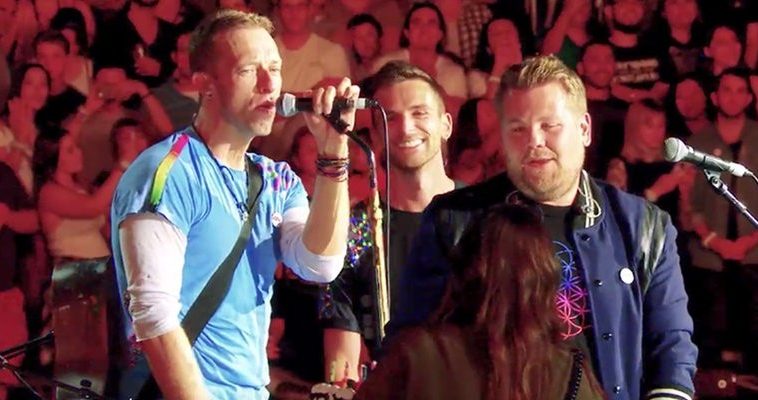 The smug and the boring – pic from official YouTube video

Following James Corden’s attempts to sing a Prince song with Coldplay, Getintothis’ Shaun Ponsonby seems just about ready to give up.

TV and its stars have been doing my nut in this week.

In a sign of the coming apocalypse, Mrs Brown’s Boys was wrongly voted the greatest sitcom of the 21st century. That’s right, in a decade and a half of programming that has seen great innovations, hilariously well-written and insightful comedy programmes like The Thick Of It, The Office, Peep Show, Extras, Nathan Barley etc, Brendan O’Carroll’s uber-bollocks was the one that readers of the Radio Times voted the greatest.

It’s not that I don’t understand the appeal of Mrs Brown’s Boys, I just don’t see the appeal after 1978. I am not a fan of Miranda, and it too has the throwback 70s sitcom feel. Except, Miranda Hart was smart enough to lace that aspect with irony. I’m not sure Brendan O’Carroll would understand irony if it shat in his mouth and forced him to swallow. It’s the real life When the Whistle Blows from Extras; humour for people who still like Bernard Manning. Warning to everyone – the people who took part in this vote are also able to vote in elections.

Then, a mere 20 minutes after reading this horrible news – still in my underwear having no sufficient reason to shower or go outside – I saw this.

Yes, that is smug tosser James Corden joining boring tossers Coldplay for a version of Prince’s Nothing Compares 2 U that only some kind of super-tosser created in a laboratory could possibly enjoy. To say I hate this performance is like saying De La Soul’s Me Myself and I sounds a bit like Funkadelic’s (Not Just) Knee Deep. Nope, it’s a direct sample, and I loathe this performance.

In the interest of full disclosure, the fact that Coldplay have maintained such a striking level of popularity is all the proof I need that there is no God. They are to our times what Foghat were to theirs; an industry band. The main reason they are so unbelievably massive is because they have so much money pumped into them. They create music that is just kind of…there. There’s no reason for it, and there is no reason for them to exist outside of making money. Not one member of the band has ever exhibited anything resembling to a personality, and it shows in their music. I might have an ugly, despicable personality, but at least it exists.

Therefore, they are completely unqualified to play a Prince song with any justice. You could never, ever accuse Prince of having no personality, no matter how standoffishness he may have been. He was one of the most charismatic performers of all time.

There is a part of me that could let Coldplay performing a Prince song slide. It is – in theory at least – a nice gesture. It is a tribute to a man they admire. Just a question; why invite James fucking Corden to sing it? I mean, other than some lame celebrity love-in.

James Corden, the TV equivalent of the loud guy in a pub banging on about going out with “the lads”, making obvious and unfunny jokes to a handful of equally loud, cackling sycophants and making it impossible for you to enjoy the company of your own loved ones.

The voice of a yawning nation – click here to read past editions of Cosmic Slop, if you can be arsed

Yes, this is the perfect man to pay tribute to Prince. A comedian, and a lousy one at that. Fucking great, yeah? It’s a bit of a bizarre way to pay tribute to him. Prince; the man who prized musicianship above all else (except maybe his religion), the man who wouldn’t let Weird Al parody his material, the man who blocked the vast majority attempts to cover or sample his work.

James Corden apparently wanted to be a singer when he was young, and truth be told he doesn’t have a terrible voice. It’s not good, but it’s better than Frank Skinner and David Baddiel. He sings with that annoying mid-00s indie landfill voice. That insincere sound we expect from people like Whatsit Pritchard from the Kooks and Thingy Merriweather who sang that “…painted it red” background noise a few years back. Except more conceited.

Perhaps the best analogy is that it is the kind of voice that a “serious” male contestant on The X Factor would sing with. The guy the judges pretend to think is the second coming of Elvis because he knows a few chords on the guitar and forces out this crappy, faux-angsty vocal. In fact, he is even doing all the over-wrought, stage school hand gestures that contestants do on The X Factor to prove how emotionally invested they are in the song. Because, you know, Zeus forbid they have to rely on their voices.

It just goes to show that obnoxious comedians shouldn’t sing. You get it once in a while with Comic Relief singles. A shit boyband will record a cover of some half-remembered Billy Ocean song or something, and they will shoe-horn Paddy McGuiness onto the record and a contractually obliged appearance in the video that we are all told is funny, but definitely isn’t.  I don’t care if it’s for charity – its shit. Do we ignore that something is mind-bogglingly atrocious just because it’s for an allegedly good cause?

And it is here, dear reader, that the history of Cosmic Slop dictates that I should make some half-arsed attempt to find reason and redress balance. It is at this point in past Cosmic Slops where everything comes into sharp focus, we take a step back and think objectively.

But, to be brutally frank, I really can’t be bothered. It’s just bollocks, innit?

Apparently, The Beatles never intended to quit touring for good. Even when they split up, they were going to carry on touring.

Olly Murs doesn’t think the charts are “fair” at the moment, because his latest single only reached #19. Yeah, because Olly Murs has a God given right to a #1 hit, doesnt he?

Morrissey was labelled a “c*nt” for not including David Bowie in a list of those who have died too soon at his Manchester gig. I’m sorry, but let’s make this clear; of all the reasons that Morrissey could possibly be a c*nt, that is pretty low down on the list.