Punk as a genre is confined to the annals of history. From the first play of London Calling by The Clash, the style of punk music changed from loud thrashing rock into rockabilly with extra shouting. With the increase in accessibility to the name of punk, so came the loss of the meaning behind it. Those who represented the righteous aggression of the left wing were diluted by a variety of scenes and cute tattoos to represent whatever was in fashion right now.

However the snarling animal that is the attitude of punk will never die. It has evolved through time to be now more than ever more a state of mind than a statement of style. In a world where you can go to see a Dead Kennedys cover band playing Nazi Punks Fuck Off at the corporate O2 Academy, you can see the real punks out on the front line challenging fascists on Bold Street, on the platform of Lime Street Station, or on the steps of St. George’s Hall.

It is this freeform, modern interpretation of the punk belief that Antipop Records are here to represent. You do not need to be spitting out syllables in a machine gun range to come on to their radar. Instead you have to be making music that shows what you believe in; music that is what you stand for; music that has soul and meaning.

When you ask a record label about the highest and lowest points they’ve so far reached, you expect an asinine tale of a gig of someone who became very famous playing a very small venue but “we all looked at each other and knew” followed by a tale of nobody turning up to a gig. The Antipop Records answer to these could be a motto to live by forever “we haven’t had our finest hour yet, we’re only just getting started; and the only thing we regret is not fucking shit up more”.

From Luka Pop to Fiction and Philadelphia International, check out Getintothis’ previous Labels of Love.

You look at band’s they have signed, such as Saltwater Injection who exist purely to pressure and stretch your limits of offensiveness and to push boundaries. Rather than to snobbishly show they can do whatever they wish, it is to challenge the concepts of those who come across them. After all, if they widen the minds of others, it creates more opportunities for everybody else. They do not need a stage to play on; there are two members of the band, they don’t need anybody else.

With LIMF moved to July instead of August, Antipop’s Annual Merseyside Punk Rock August Bank Holiday Weekend should be the place to head if you want some live music to pulsate through your soul and probably get some opinions too on what is going on with the world.

For those who have not yet been to one, this is a three-day showcase of the best of the North West’s punk scene and some of the top UK touring acts all squeezed into the rock n roll glory of Maguire’s back room. Admit it, it sounds so much better than traipsing through the mood at Creamfields to watch someone play some music on a laptop. There are plenty of acts you will recognise from other gigs such as Ohmns, Flat Back Four and Queen Zee and The Sasstones. With weekend tickets costing from £16, three days of music is cheaper than a round on Seel Street. 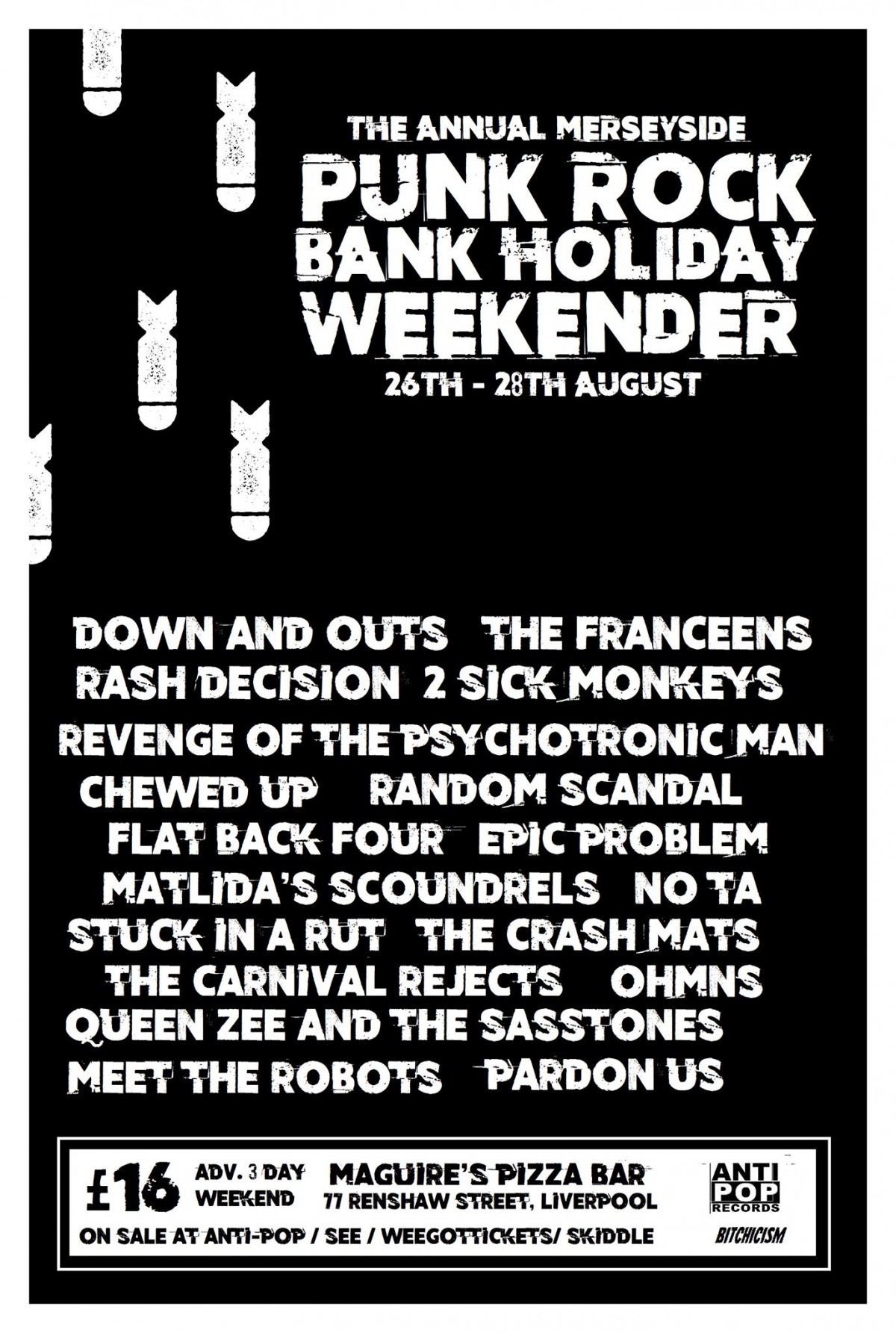 Antipop Records are more than just a record label throwing on a summer showcase. Without Antipop Records there would be a lot of people in Liverpool who would be rehearsing their own tracks, but having to play Beatles covers on Mathew Street if they wanted the opportunity to play live. Within the underground scene (see: venues smaller than a footballer’s kitchen) they are a heartbeat, a lifeline.

Even people who are not on the Antipop roster hold the label in respect. The two-tier system of gigs and releases allows everybody the opportunity to make their name on the Antipop circuit and to see if they and Antipop are a good fit together. If you want a chance and have something to offer, people believe that Antipop will give them the chance. Also their knowledge of the music scene is not kept to themselves either. It is unfair to burden them with being Yellow Pages for Liverpool Music, but they have been known to recommend people to produce or mix records.

The four releases due from Antipop Records over this summer and autumn really strike a chord with the leaders of the label as being representative of everything they are trying to do.

Pete Bentham and the Dinner Ladies

• Carl Moorcroft’s On the Road (August 5) as the former punk frontman turned acoustic singer songwriter puts his opinions to glorious tunes. We’ve listened to it, it’s simple and stupendous.

• Sweet Deals on Surgery show that Antipop Records is not just a Liverpool concern as the Preston/Manchester Noise Pop outfit release their debut album of “short, snappy, stupidly titled insights” with the out-of-character lengthy title of The Snake and The Snoozer (September 2).

• Pete Bentham and the Dinner Ladies have their last slice of Kitchencore (their own genre) with the 7” EP Songs from the Psychedelic Village. If you have not heard them before, think of The Lancashire Hotpots with anger and ire – and get ordering it from September 23.

• Elmo and The Styx have Be Fool coming out on October 7. This will see more of their progressive punk hit the world. The question is will the world survive?

Antipop Records makes you hope that somehow they end up with the next big thing. They would probably hate it, but the world would be a better place for it.