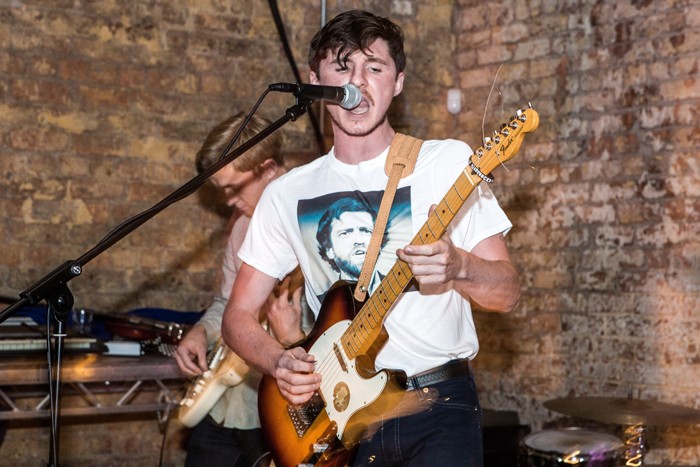 Sankofa made a sultry and soulful appearance at Buyer’s Club as they launched their single All The While and Getintothis’ Sue Bennett was there.

Sankofa, and their music, have a way of expertly building your desire. A strategy of recording an album on the back of a successful crowdfunding campaign is a testament to this as well as the sense of anticipation  that now lives in the swaying hips of all that rocked at Buyers Club. You can satiate your desire, at least for now, with the newly released single All The While via iTunes.

Their entrance was precluded by FUSS and Strange Collective. FUSS appeared first and delivered a sound sometimes reminiscent of early Nirvana but sweeter and with a more contented soul that might belong to all of your perfect summers yet to come. Check them out on Soundcloud- they will make you feel like a cowgirl in suburbia as their Nick Cave bell tolls on Brutha of the Sun.

Strange Collective provided the meat to the line-up sandwich and although we’d been told to expect animals, others described this performance as Strange Collective on their ‘best behaviour’.  As the gentlemen of garage rock for the evening they nevertheless delivered a rambunctious set. With push-me-pull-you snare drum beats that anticipated the vocalist’s high wail- a sound that was truncated a note before he let out a full-on scream.

In another venue this band would have had a mosh-pit and they’d be the reason for that ringing in your ears for days thereafter. On this night Strange Collective made a harmonious union with their surroundings and proved to be versatile enough to rock the hipsters.

Lead by two pretty fangirls, the crowd eagerly shifted forward to greet Sankofa- a hungry move that was backed up by well over one hundred people wanting to get intimate with the band and Buyers Club’s low-set stage.

The name Sankofa discusses reclaiming the past in order to move forward in the present day. Visually the guitarists Stephen Wall and Joel Whitehead  look like a couple of 1950s icons; clean cut with tight jeans.

Stephen wouldn’t look out of place with his leg up against the wall flicking a cigarette, James Dean– like. He may have described himself as a scally (in a bit of an off-the-cuff comment), yet neither him nor the rest of the band are that. In any case, some of the most legendary frontmen from Northern bands could be described as scallies.Sankofa tick the rest of the rock and roll imprint boxes with the long-haired musician style of Daniel Allen (bass) and Josh Perry (drums).

Together they make a sound that will take you on a spiritual waltz that invokes the Fleet Foxes as much as it does Otis Redding.  The vocals are dramatic to the point of almost breaking your heart, yet there’s something warm about them as well.  If you were listening through the lens of synaesthesia Sankofa would appear as burnt orange. Their music is somehow reminiscent of a Tarantino Western film yet to be made.

As you can probably tell, they will take you somewhere else entirely; and isn’t that what all good music is meant to do? Sometimes it will be on a surf vibe with tones of Eddie Vedder, at other times you’ll be seduced by some gritty version of euphoria.

This is all true.Yet Sankofa really are more than this. They are a mythic law unto themselves. A band who are moving music forward and from their showing tonight, potential headliners of a new Liverpool underground scene.