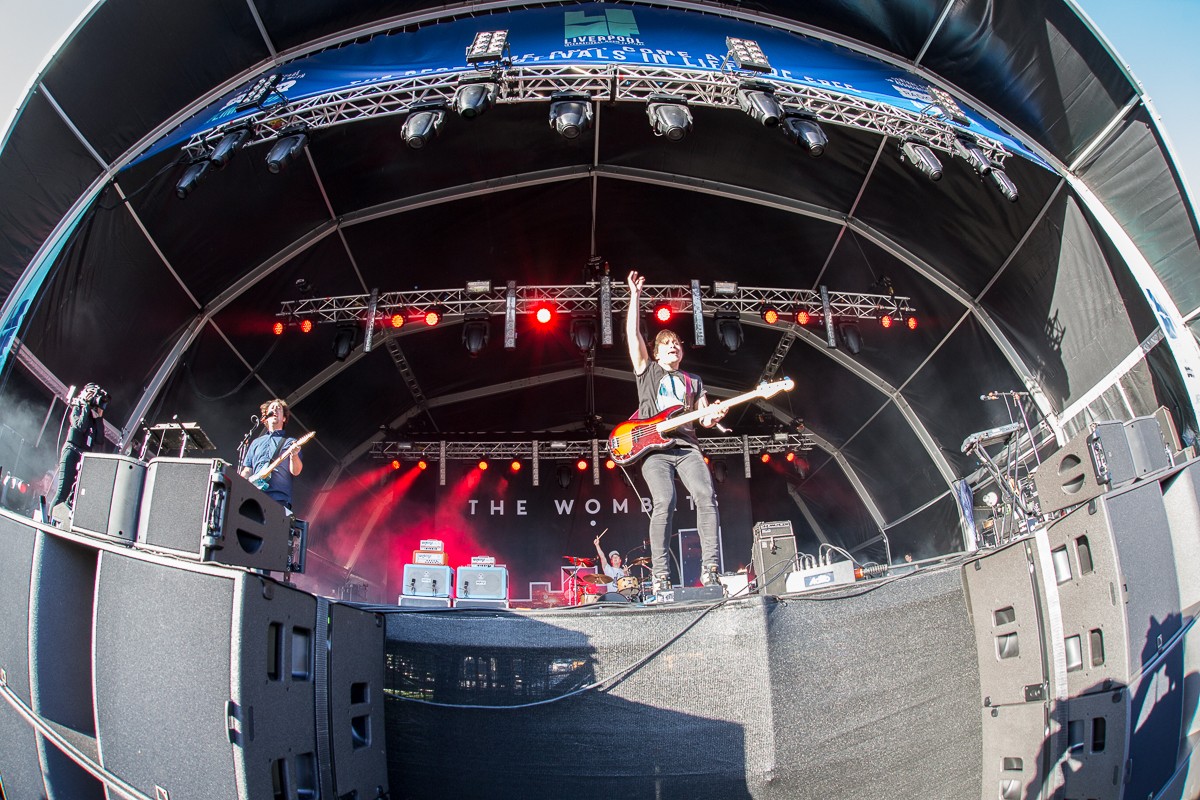 Although Getintothis’ Shaun Ponsonby clenched his teeth a little, Lianne LaHavas and The Wombats win him over at another great LIMF day in the park.

LIMF goes for the big climax tonight, with one last big free show at the Summer Jam in Sefton Park. And, guess what? It rained quite a bit. Not content with trying to ruin this year’s Africa Oye, the elements apparently conspired to take a giant piss over LIMF as well.

Actually, it didn’t rain that much. We’re just being grumpy. When it did rain, it was often kind of welcome given how muggy it was. It didn’t really affect the acts or the crowd either.

We caught Ady Suleiman at the From The Soul commission, and he was as charming today as he was then, though perhaps some of the contact he had on the smaller stage didn’t translate quite as well on the bigger stage, not that we think he is incapable of this – it could just be a direct comparison to the show three days ago.

Claire Simmo from Radio City 2 hosted the stage early on and – we hate to say it, because this writer knows exactly how difficult it is to deal with large crowds – but part of us thought she was having some kind of breakdown on stage. It was an unconvincing level of enthusiasm and she may or may not have been scratching her nails on a chalkboard as she spoke, it’s hard to say. It was likely the first time she had done something on this scale though, so perhaps we should cut her some slack.

You pretty much know what Craig Charles is going to give you, but we assure you that is a good thing. Though it is pretty odd to see him play at 3 o’ clock in the afternoon, it’s still a thrill to see him kicking some ol’ skool joints for the true funk soldiers. He understandably plays it safe with his slot, but it goes down nicely and makes us forget about the occasional rain.

Check out all the rest of GIT coverage of LIMF

Frances was an odd choice to follow, and she alludes to this herself. To go from Craig Charles’ revving of the crowd with funk and soul to Frances’ comedown of balladry was extremely jarring. We would much rather see her in a theatre – even if she does impress us more than Adele ever has. Definitely not music suited to the big stage, but impressive all the same.

Having said that the rain started to resemble a monsoon during her set and her music is suited to it. It’s hard to know whether the performance was apt or not.

Kwabs is simply brilliant. His band is solid, and other than an unnecessary cover of Bieber’s Love Yourself that frankly just made us angry, he nails his set. Special props to his guitarist, who easily took the performance to another level.

As insane Prince fans – and still deep in mourning – we were almost hoping Lianne LaHavas would just recite all of her spoken word segments from his Art Official Age album. It was probably for the best she didn’t. She actually gave us perfect Sunday afternoon music. Predictably, her voice was perfect, and her interaction with the crowd made us want to hang out with her afterwards. Marvellous voice, brilliant songs and a wonderful lady. What else could you want? The sun even started shining.

The Wombats were an interesting choice to close out the weekend. Outside of Liverpool, you can probably see them confined to the (occasionally unfair) “indie landfill” in the minds of many.

But we’re not in the rest of the country. We’re in Liverpool. The hometown boys do good, pulling by far the largest and most enthusiastic crowd of the day. Much bigger and much more enthusiastic than we anticipated in fact. There were far more people here than there were for Echo & The Bunnymen‘s closing set last year.

As it turns out, The Wombats closed out LIMF triumphantly. They played solidly and the crowd ate them up. Maybe they can catch that second wave.