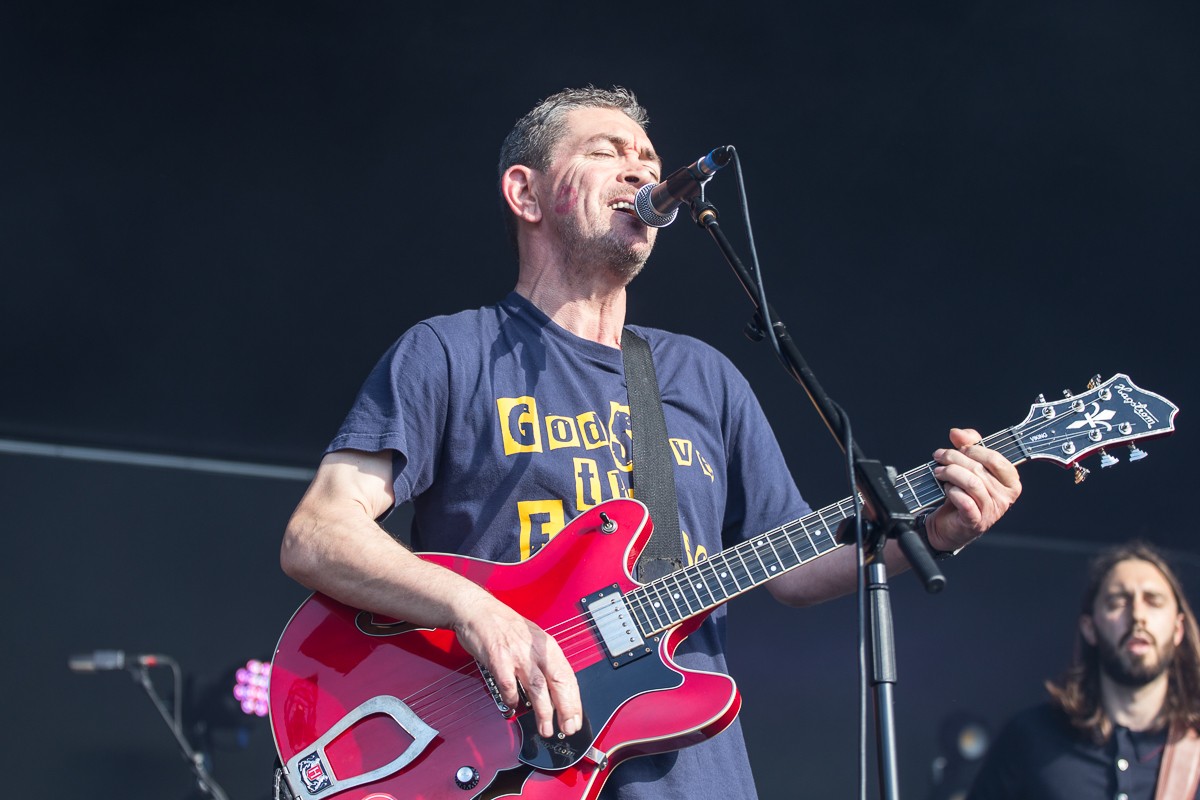 On a day where the weather just couldn’t make its mind up, Getintothis’ Adam Lowerson enjoyed the relaxed atmosphere at the itsLiverpool stage.

Following a day of brilliant sunshine and huge crowds, you could be forgiven for feeling slightly concerned about the Sunday at LIMF as the heavens opened just in time for the first bands of the day. The audience was understandably pretty sparse early on and the skies looked unforgiving. This had the potential to be a pretty terrible day.

It’s lucky then, that two of Liverpool’s strongest live outfits, RongoRongo and the Vryll Society, were on hand to pick us up with two brilliant sets. The former, who had the unenviable task of opening the day during the downpour of rain, felt like a perfect match for the weather. Dark and gloomy yet so melodic and completely engrossing. Their 80s, post-punk sounds gets better with every listen, while frontman Mick Chrysalid, who ends the set wearing a dressing gown waving cheerily at the audience, is impossible not to watch.

The Vryll Society are becoming a serious live band. They’ve got tunes, swagger and groove and following summer slots at Glastonbury and BlueDot Festival, they should really be playing much better slots than this early in the day. The epic, voyaging Deep Blue Skies is as good a set closer as you’ll see, and shows off singer Michael Ellis‘ vocals as well as the talents from the rest of the group.

Another early set was performed by LIMF Academy prospect Michael Seary. Performing with a number of guest vocalists, there wasn’t really any consistency in the sound, and the addition of a live band to his electronics didn’t quite work. But there is promise in his productions. Later, Natalie McCool performed a slick set of electro-pop, closing with her ballad Fortress, a track which was a stand out moment at last year’s LIMF.

Clean Cut Kid entertained a healthy sized crowd with their radio friendly folk pop, and showed signs that they could be a band that could easily make the leap into the mainstream. Although the way they jump up and down in unison feels so choreographed it’s almost cringeworthy, their tracks such as Vitamin C are genuine pop hits in the making.

Dave McCabe and the Ramifications took things up a notch with their pummelling electro-indie, a sound which is now much more refined than when we’ve seen him in the past. It was a great set packed with energy and catchy tunes, and was topped off nicely by Zutons‘ track You Will You Won’t.

The most anticipated set of the day was easily that of Johnny Echols, guitarist of Love, a band with a huge bond with Liverpool. Performing the hits of the iconic Love, the set featured guest performances from an array of Liverpool’s finest musicians, John Power, Nick Ellis, Mike Badger, Edgar Jones and Dave McCabe. It was a conveyor belt of talent, which each guest vocals bringing something unique to the set. The setlist was absolutely perfect, with classic tracks such as My Little Red Book and A House is Not a Motel getting an airing. 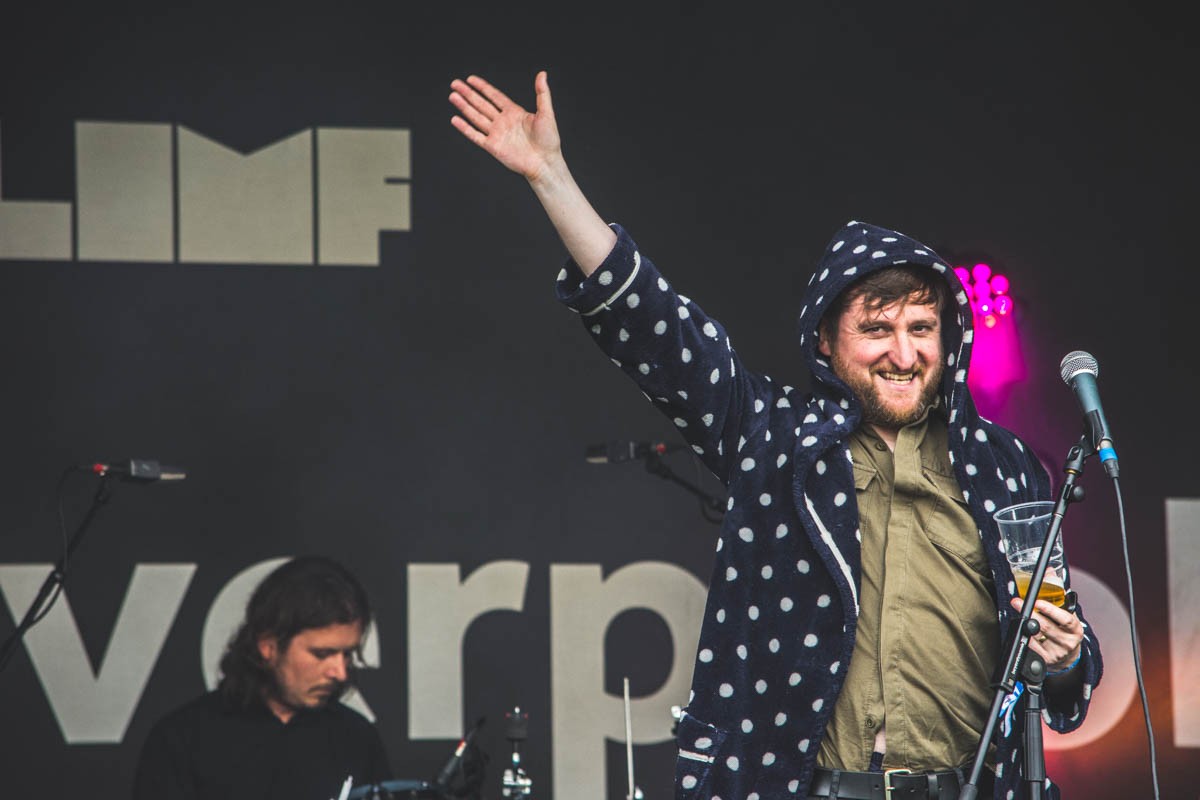 McCabe, who brought the set to a close with his best Arthur Lee impression, was absolutely fantastic again performing a raucous cover of Seven and Seven Is, but the highlight of the set was without a doubt John Power‘s Alone Again Or. Power, who was clearly made up to be a part of the set, did the original version huge justice, as did the band who were brilliant throughout. It was a set so enjoyable that we can hardly believe we got it for free, and was worth braving the rain for alone. 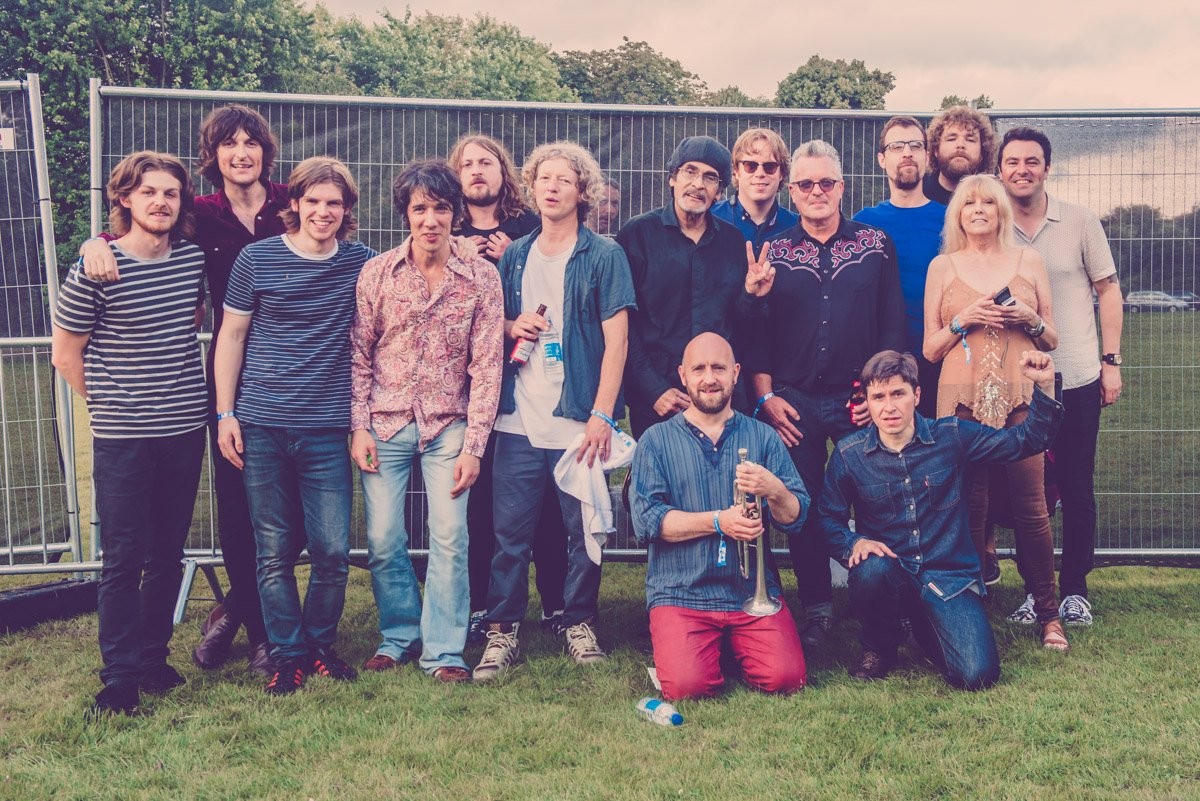 From Liverpool With Love – the whole collective

After a day of enjoyable sets on the itsLiverpool stage, the sun finally won its day long battle with the clouds and broke through just in time for headliner Michael Head and the Red Elastic Band. The cult-hero songwriter drew in the biggest crowd of the day and had all in attendance singing along to a career spanning set, performing tracks from his days in the Pale Fountains, the Strands and the Red Elastic Band.

Although for this writer his sound is slightly dated, it’s so easy to see why Head has built up such a loyal following over the years. His songs are raw, warm and completely authentic and sound great in the sunshine with the backing of strings and a brass section. It’s genuinely moving to see how much Michael Head means to some people, and how much it means to him to be performing in front of a huge hometown crowd. It’s a lovely end to a great day.