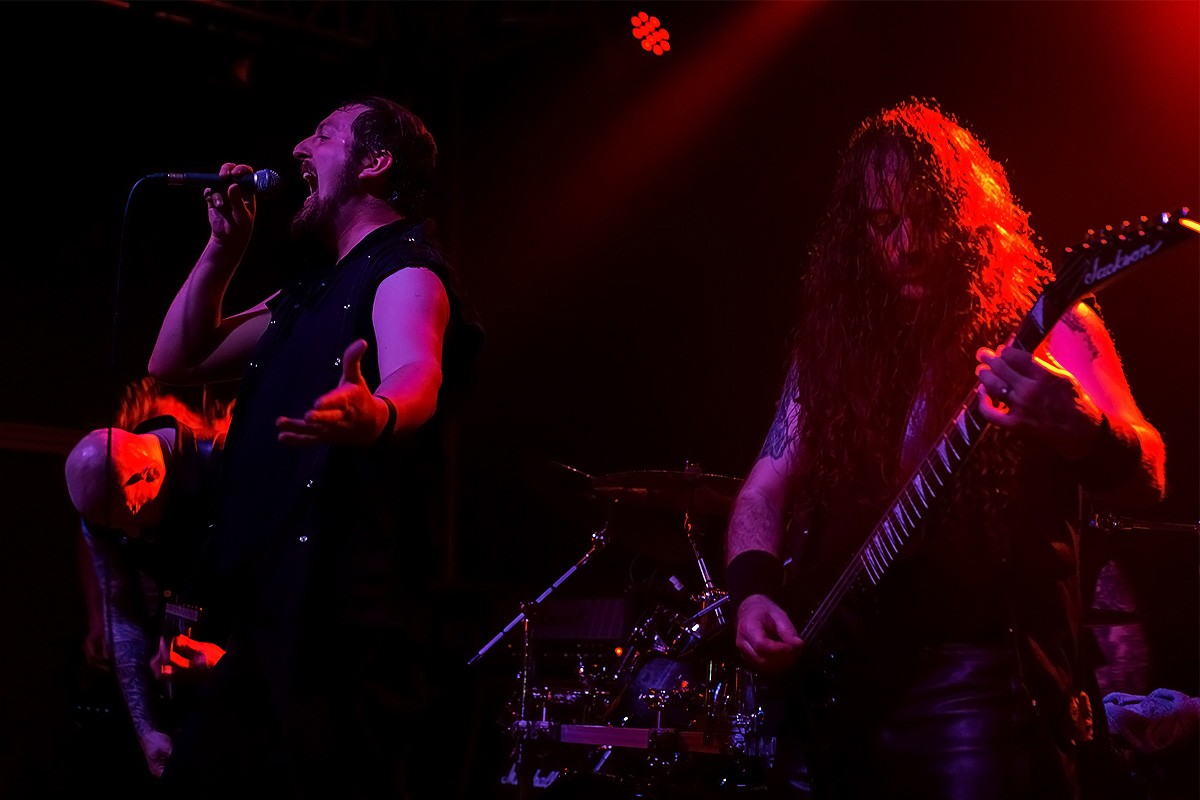 Corspepaint, lead singers pulling their own hair out on stage and axes for Getintothis’ Mark Davies’ night of metal at The Arts Club.

Kicking off a night of heaviness we had The Crimson Brigade from Chesterfield on at the fairly early time of 7:10pm, yet that didn’t stop the blackened Vampyric War Metallers from laying waste to the Arts Club and setting the tone for the acts to follow. Despite being only two members strong with drums and symphonic accompaniment provided by a backing track, everything was well-programmed and executed with finesse. Particular mention should go to the bands bassist Beserker for getting the growing crowd into the spirit of things with his exuberant personality and, of course, an axe by his side.

Up next were Devon’s own Dystopian Wrath on their first trip up north, and this five-piece really filled out the stage, complete with their own symphonic backing track. If The Crimson Brigade set the tone, these guys ramped it up a notch with dual guitar attacks and blistering drums. Their set was good, if only marred a little by some kind of problem during the penultimate track, which, if the vocalist hadn’t made a point of highlighting and subsequently storming off the stage before finishing the track, most crowd-goers wouldn’t have noticed. Otherwise, musically, these guys were solid.

However, nothing could prepare us for Sathamel’s entrance into the fold, with Behemoth vibes a-plenty, hammering riffs and well coordinated windmilling, this Blackened Death group from Leeds honestly blew us away. These guys had such overwhelming stage presence, replete with corpsepaint all around. The set was crushingly heavy from beginning to end, but each instrument was well mixed and pleasantly audible, a credit to the band and the in-house engineer. Kruk, on vocals, used a great use of a variety of vocal techniques, with a powerful mix of highs and gutturals to keep things interesting. We’ll be keeping an eye on these guys, and look forward to catching them again.

As the night powered on it was Ninkharsag’s turn, and thus, time for metal of a more grim and frostbitten nature. At this point you felt the atmosphere in the room shift palpably towards something icier and more malevolent. Being the local band of the line-up you could tell they felt right at home, so much so they kept the lights dimmed, only using sparse backlighting which set the mood perfectly for their razor-sharp riffs and shrieking vocals. Without a doubt, if the cheering crowd and claws in the air weren’t a dead giveaway, Ninkharsag are well liked around here. They played a hail-worthy set, including the highly revered track ‘The Essential Salts Of Human Dust’ among other fan favourites from their debut album ‘The Blood Of Celestial Kings’ (out on Candlelight Records), and ended to much deserved growls and applause with the obligatory horns raised.

Finally though, and without further ado, it was Hecate Enthroned’s time to shine, and that they certainly did. The audience’s anticipation at this point had reached unmatched proportions, something the band made great haste in taking advantage of, launching into their set at breakneck speed. We couldn’t help but admire the mastery these guys displayed. Every part was airtight and note-perfect but still with a certain soul to it, incredibly fast yet without the mechanical synthetic edge which many death metal bands struggle to find a balance with.

Each track was better and more punishing than the last and the vocalist Joe even pulled out a handful of his own hair at one point, in what we could only surmise as being how he reached his particular brand of shrieking highs! Joking aside, Hecate Enthroned did not disappoint, and from a fans perspective it was great to hear them pulling out some of their older tracks from the archives. This band is definitely worthy of your time and respect.