In the city for the first time since 1971, Getintothis’ Shaun Ponsonby witnesses George Clinton’s unique universe, resulting in a life changing experience for some.

There’s another Clinton dominating headlines at the moment. Something about being a presidential suite or something. Anyhow, it can’t be of that much importance, because tonight is all about the greatest Clinton of them all.

This is a big one, and probably one of the more anticipated shows of the summer. In Liverpool for the first time since 1971 – P. Funk. Uncut funk. The Bomb. And, deeper still, the Mothership Connection. It’s Friday night, sold to the rafters. There is literally sweat dripping off the walls. Y’know, one of those nights.

Starting a little late with Pole Power, the world’s funkiest man, George Clinton, enters the stage with between 15-20 funkateers (we kept losing count) decked out in a variety of paraphernalia. It genuinely feels like you are stepping into an entire universe. This is not the world as we know it. Every time you think everyone is on stage, about six more people arrive, each decked out in an increasingly elaborate way. You have young guys in casual clothing, a woman who is seemingly dressed as a cat and at least one pimp.

In recent years, Clinton has cut off his infamous rainbow coloured hair, switched baggies for dapper suits and given up crack. It has led to a total transformation in his persona and performance. Never the greatest vocalist, he now exerts a gutsy growl, like Tom Waits mixed with a badass lion. It helps provide confirmation that he is, in fact, one of the coolest motherfunkers on the planet.

Where a few years ago he was more or less making cameo appearances at his own gigs, now he is front and centre. He sermonises with surreal imagery which, at first sounds ridiculous, but after some thought begins to sound oddly profound; “All that is good is nasty, and nothing is good unless you play with it.”

The 75-year-old may take a seat occasionally, but he is conducting the madness surrounding him. And it is madness. You never quite know where they are going to go next. In a way, they seem to give us their own grimey history of popular music in three hours. There is an undeniable purity about it. Who else links doo-wop to hip-hop, and everything in between?

Sure, there’s the heavy funk that they are best known for, but there are those soulful vocals, the hip-hop of Get Low, the nu metal (seriously!) of Dirty Queen and some of the finest hard rock to come out of Detroit, as guitarist Blackbyrd McKnight takes the lead on an awe-inspiring rendition of the 1971 instrumental Maggot Brain, one of the seminal guitar pieces of all time. He doesn’t emaulate original player Eddie Hazel, he does his own thing with respect to the originator, which is true of all the musicians on stage. If people expect a nostalgic stroll down Memory Lane, then stay at home and listen to the records. This is not what is on display tonight, and it is all the better for it.

No song sounds like it’s studio counterpart. Everything is slowed down, or sped up, or re-arranged. and usually extended. Like, really extended. And the longer a song goes on, the better it is. These are all incredible musicians and they know exactly what they are doing.

P. Funk shows are not a place for the pretentious. You have to fully embrace the goings on. In the words of the man himself; “Free your mind and your ass will follow”. In time for uber classic Flash Light, Dr. Funkenstein’s arch nemesis appears on stage. Sir Nose D’Voidoffunk is an unfunky pimp, determined to stop the funk. His presence represents the non-funk, the hatred, the oppression, the mind control. Sir Nose can only be defeated if the audience make him dance – and dance he does. Ripping off his fur coat, he performs flips, body pops, dances on top of the speakers and makes his way down to the crowd up front.

At times, it almost seems like Clinton Snr is prepping his younger namesakes to take over the legacy in the decades to come. We could actually envision that by what is on display here tonight.

For example, the first 20 minutes of the gig was a long stretch of tracks from the most recent Funkadelic album, 2014’s mammoth First Ya Gotta Shake The Gate. Being predominantly performed by Clinton’s children and grandchildren, many of the tracks are outright hip hop, and a very different feel from the rest of the set, but provide a glimpse to a possible future without the man himself, with Trey Lewd and Tra’zae being particularly effective in the role.

It is barely controlled chaos, but through this retains its edge. No other artist who has attained the level of success that Clinton has for so long has managed to keep that edge. He has created his own world, and built it up and maintained it for over 50 years. For a few hours a night, he welcomes us into that world for a taste of life as it should be.

The ending trio of Give Up The Funk, Night of the Thumposaurus Peoples and Atomic Dog manage to take it to an even higher level. They don’t just tear the roof off the sucker, they melt the entire room. Despite being way over curfew and having experienced over two hours of pure funk, the crowd screams for more.

But there is no more.

For a veteran, it maybe wasn’t quite as great as some previous shows witnessed. But as we head for the door, one Getintothis staff member utters “That was a life changing experience,” with a similar response from other first timers. So perhaps you can take a good thing for granted.

Either way, we hope they don’t wait another 45 years before they return. 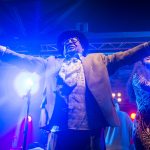 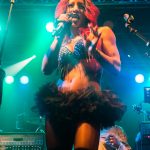 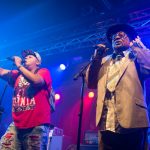 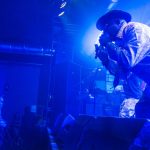 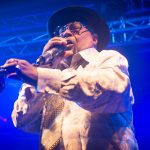 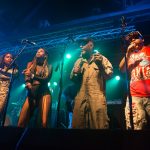 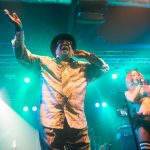 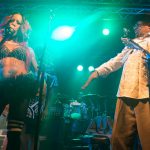 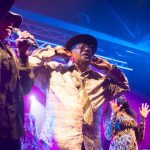 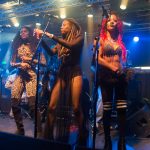 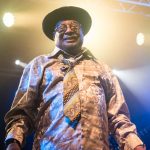 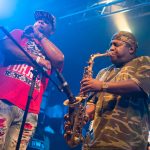 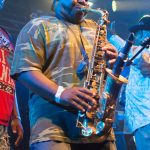