Aristophanes at the Buyers Club

Imagine you’re in a dimly lit warehouse, drink in hand and music rattling your ear drums. Now shrink that warehouse down to a garage (okay, maybe a bit bigger), add a bit more intimacy as everyone stands shoulder to shoulder, throwing their hands about. You have the Buyers Club with a perfect atmosphere for some heavy future beats.

Starting the night off were alternative electric duo, D R O H N E, whose music wouldn’t have been out of place as a soundtrack to a post-apocalyptic movie. And yes, that’s a good thing. Having started off as a simple bedroom project, the duo have now developed the experiment into something bigger, doing what they like to call ‘shocking the audience’.

The bass heavy beats acted at times as an ambient lullaby, with looping, echoing vocals, each track flawlessly blending into the next. Their ambient soundscape, with occasional eerie chanting, is haunting and stunningly effective. With only a 30 minute set, D R O H N E managed to utilise their time and with enough variety to support itself and give a kind of cutting edge the sound deserves.

If you’re a fan of new music from BBC Introducing, then you’ve more than likely to have heard of Feral Love. Certainly many at the Buyers Club had, as the crowd gravitated towards the stage to witness the dream pop band. Their cutesy appearance dissolved when Adele Emmas announced herself through her powerful vocals. Christian Sandford impressively multi-tasked between keyboard and guitar, with flourishes of  shoegaze throughout their set,stepping in at just the right times to put more oomph into the melodies when needed. No doubt Feral Love will be a name you hear a lot more of.

Now it was time for Aristophanes. No, not the comedic Greek play writer, but the 25-year-old Taiwanese rapper, making her Liverpool debut. Before playing, Aristophanes opened her set with a question to the crowd ‘Do you want to follow me to outer space?’ And so the dreamy electronic thrill ride began.

At first, the textured glitch sounds merged with magnificent rhythm, and then instantaneously became more complex from there on in. Elements of rap and super-fast vocals collided into the aggressive, almost excessive, amount of beats per minute.

As if not kooky enough, Aristophanes then turned the set into a theatre-like performance, swaying, dancing, bowing and even screaming her verses whilst laying down on the floor. It’s more than fair to say she grabbed everyone’s attention; completely owning the room.

Her interpretations and explanations of what each track meant made a connection with the music on a a deeper level, creating a sound that’s so tight and well-placed, it feels sparkly on all ears.

The tones of Aristophanes is somehow arresting and confusing at the same time, but always maintained a certain flow. Her playfully taunting delivery gives each track a more alternative hip-hop feel whilst also being effortless and clean. Her music is so extremely original and truly experimental that we just lust for more of her outer space adventure.. 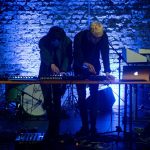 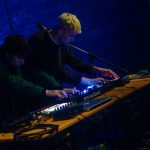 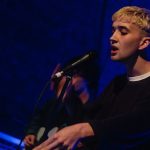 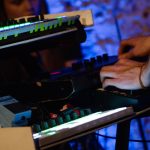 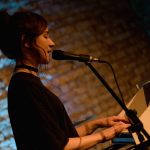 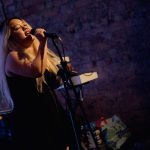 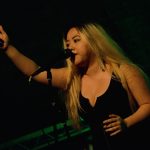 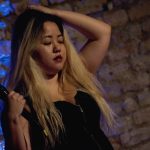 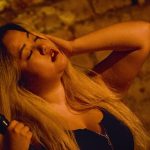