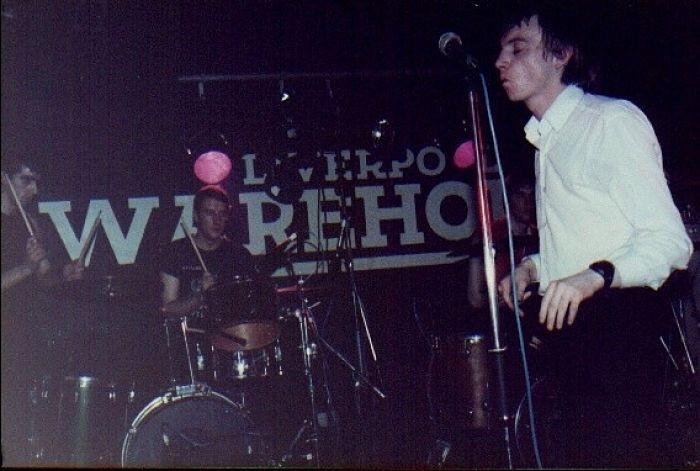 The Fall at The Warehouse – pic courtesy of Andy Carroll

For some reason, the Warehouse tends to be left out of Liverpool’s clubbing history, so Getintothis’ Banjo attempts to put that right.

As we have mentioned before in these pages, Liverpool has a fine tradition of having world-beating clubs perhaps unrivaled by any other city in the world.

From The Cavern to Cream, Liverpool’s clubs have a habit of creating a scene, of attracting people from far and wide, of gathering acres of coverage and perhaps even changing the world we live in to some degree or other. There are busy Facebook groups for Eric’s, Voodoo and The State.

There are also books galore on Liverpool clubs, the crowds they attracted and the bands that played. And yet, when this history is written, there is one that seems to be almost completely ignored. It is a club that had a regular clientele, a smattering of famous faces in the audience and supported local bands, many of whom went on to have their moment in the sun, such as Frankie Goes to Hollywood, Black and A Flock of Seagulls. There is no readily discernible reason why this club, out of all of them, should be forgotten about like this, so maybe it’s time to shine the light on it once more. So let us remember Liverpool Warehouse.

If this writer may delve into my own memories for a moment; following the closure of Eric’s, my clubbing life took a break at the tender age of 16. Brady’s took over where Eric’s left off and it had an impressive run of bands playing in the same building and seemed to try its best to fill the void left in the wake of the latter’s closure. The trouble was, from my perspective, that the gigs finished late – as a matinee kid I could go to Eric’s every Saturday where the afternoon gigs finished at 5. This meant I could be back home by 6, although I was much more likely to be looking for mischief to be getting into, attending one of those teenage parties or trying to get served in the local pubs.

LIMF celebrates Liverpool’s punk culture – we take a look at Erics – the club that started it all.

Brady’s had a few matinee shows at first, although I was never tempted to attend, partly for misplaced feelings of loyalty to Eric’s rather than supporting this new pretender to the throne. Ever the contrarian, it wasn’t until the matinees stopped that I looked at the line ups and actually wanted to go.

Unfortunately, the evening gigs finished well after the time of the last train home and my pocket money meant taxis were an unused, not thought of, unattainable luxury, so it was a good few years before clubs and I were reacquainted. In the meantime there was the Royal Court and the Mountford Hall, catering for the post punk groups who had progressed up the ladder, such as The Cure, U2 and the Bunnymen, but venues like that never had a scene attached to them. Punters would turn up, watch a band and go home. The Warehouse then was something of a godsend – and another life changer.

In the good old 80s, taxis were still out of the question for many of us after a gig, the Thatcher government’s work experience schemes meaning a generation were working full time for ten pounds a week more than they’d get on the dole, myself included. So for me a gig at the Warehouse meant a cold and uncomfortable night kipping on a floor in Princes Road, followed by an early morning and then going straight back to my work experience hungover, hungry and knackered. And every single gig was worth every last bit of it.

The early 80s were an incredibly fertile time for music, after people inspired by the punk explosion to pick up instruments and give it a go were doing precisely that, and nowhere was this truer than in Liverpool.

Giving stage space to these bands became one of the Warehouse’s main strengths, local heroes such as The Room, The Cherry Boys, Ex Post Facto, Come in Tokio and the excellently named Attempted Moustache all benefitted from having a well set up, credible venue to play and develop.

At this time bands grafted for a living – with many bands, if you got an album by March chances are you’d get another one before Christmas. Tours were frequent and were seen as an end in themselves, not just a way of promoting an album – they were what a band did, how they earned a living and gathered fans. The Warehouse was in the right place at the right time to take full advantage of this situation and became one of the main stopping points for bands on tour.

Ticket for The Room and Vox Arcana

The Warehouse itself was a fairly large place, but functional in design – basically one big room with a bar on one side, a stage at the other and a dancefloor in the middle. A large seated area or two completed the floor plan and provided a place where people could meet, recognize faces from previous gigs and strike up friendships, bonding over those twin peaks of compatibility – music and beer. These more secluded areas were also a nice space for punters to swap tapes, skin up and sell fanzines. The glittery red walls were a nice touch, although the seat and tables, consisting as they did of black slabs of plywood on bricks were basic but capable and unlikely to collapse when used as impromptu podiums.

Looking back at the flyers, there were good bands on almost every night and it wasn’t uncommon to find yourself there three or four times a week. The flyers also read like a who’s who of early 80s indie, with many of the bands listed moving on to bigger and better things quite quickly. Dead Kennedys, Aztec Camera, Johnny Thunders, Big Country and Tears for Fears are just a few of the names leaping out of the hand written flyers.

A good night out back then often involved a gig at the Royal Court, looking out for a flyer that promised free or reduced entry into the Warehouse and going straight from one gig to another. Other than that, trying to get into the Casa was the next best option, but more often than not, the Warehouse was open and some classic gigs could be chanced upon in this way.

This being the 80s, bands were trying various ways to involve or piss off their audience, depending on their inclination and how they tended to deal with fans. Thompson Twins handed out bongos, drums and various pieces of percussion to the audience in an attempt to involve them and make the statement that the audience were as much as part of things as the band themselves, resulting in a bongo frenzy and a friendly stage invasion. Conversely, Cabaret Voltaire turned their blazing strobes onto the audience for up to 20 minutes at a time, pissing people off and making the gig as difficult to watch as it was to listen to.

The Birthday Party, featuring a younger and more violent Nick Cave played there twice. The first time Nick was on fine form, engaging in light insults with the audience and spending the evening stage front. The second time, he drank a whole bottle of Jack Daniels in the 50 minutes they were on stage and spent the last song slumped at the back of the stage, crying into the microphone whilst trying to sing King Ink.

Some Warehouse gigs were from bands who should probably have been booked into bigger venues. The Dead Kennedys gig was dangerously overcrowded, with people completely jammed against each other with little room left to do anything but attempt a group mosh and with sweat constantly dripping off the ceiling. Big Country was another crowded night and one where fans were leaving the club looking like they had just stepped out of the shower.

Dead Kennedys at the Warehouse, pic courtesy of Andy Caroll

The Au Pairs played a particularly brilliant gig at The Warehouse that is still discussed in hushed tones amongst those in attendance. The best gigs you see are those that give you a feeling similar to when you drive over a bridge too fast, that jump in your chest and a slight intake of breath, and the Au Pairs achieved this from the first song to the last, playing an absolute blinder. Another incredible gig was The Fall playing with their classic two drummer line up and performing a two-hour set featuring 11 and 12 minute versions of songs from their brilliant Hex Induction Hour album. Nights like these seemed to be readily available at The Warehouse, which makes it all the more unfair that it seems to have slipped out of common memory.

Perhaps one down side to The Warehouse is that it was never quite attached to a scene in the same as Eric’s.  Whilst without doubt a great place for local bands to play, it lacked being a cohesive whole, maybe because the original players had moved on and fallen out.  In fact this could well be looked at as a reflection of the Liverpool music scene at the time rather than any failings of the Warehouse team themselves.

The end for the Warehouse came when a fire caused the club to close its doors for good. A sad accident I’m sure, although the rumours still persist of staff and regulars enjoying a stay behind on the last night and drinking the bar dry before the fire started and the (presumably) insurance claims were lodged. Fires in clubs were a fairly common thing in Liverpool around then, and I have a possibly unreliable memory of Adams and the Bierkeller meeting a similar fate in the same week. Whatever the reason, The Warehouse closed its doors and another great Liverpool club was consigned to history. But hopefully history will remember the Warehouse and those wonderful carefree nights a little more than it currently seems to.