Celebrating three decades of an influential masterpiece, Getintothis’ Orla Foster takes a look at The Smiths’ most celebrated work.

It’s generally agreed that The Queen Is Dead is The Smiths’ most iconic album. Over the years it has met with non-stop applause; triggering so many solemn reflections, crowning so many editorial lists. It’s the kind of album that brings music critics into a declamatory rash; amping up their prose to such panegyrical heights they might as well have slipped into Latin.

Still, it’s not hard to see why this album resonates with people. Consider the world it was released into. This was 1986 and the charts were awash with Genesis and Robert Palmer. Thatcher’s government were in their second term and hellbent on crushing trade unions, miners and the unemployed. Times were bleak, and the world wasn’t listening — or worse still, it was listening to Simply Red. Where the album’s predecessor, Meat Is Murder, stuck it to carnivores and secondary school despots, The Queen Is Dead was taking aim at the top.

You only need to listen to the first song, also titled The Queen Is Dead, to get a glimpse into the band’s fury. The schmaltz of the intro (a chipper rendition of Take Me Back To Dear Old Blighty) is shattered when the incendiary, stuttering drum loop kicks in, an ominous whistle of guitar feedback pierces the air and Morrissey sings — no, orates — his opening line: “Farewell to this land’s cheerless marches/ Hemmed in like a boar between arches”. He constructs a damning picture of a Britain clinging blindly to its institutions, paying obeisance to the queen and government and refusing to address more pressing concerns (“When you’re tied to your mother’s apron, no one talks about castration”). The album’s working title, Margaret On The Guillotine, makes the band’s political stance abundantly clear.

But the UK’s political infrastructure was not the only barrier The Smiths were up against. The band were doing their best to function without a manager, bassist Andy Rourke had been briefly fired for his drug habit, and the record itself was delayed more than a year due to legal disputes with Rough Trade. Morrissey’s autobiography, published in 2013, gives a mordant and embittered account of some of the tensions leading up to its release: “The bewildering excitement of touring ran alongside the legal demands of our lives being sealed up as the usual heel-dragging, fleshed-out, money-making and deliberately distracting court action takes place, and Johnny and I [were]fleeced from all directions.” 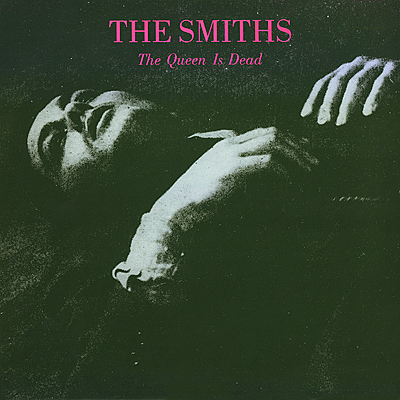 Consequently the next track, Frankly Mr Shankly, is a snarling rejoinder to a controlling and overbearing boss (in this case, Geoff Travis). For all the anger bubbling beneath, it has the kind of rambunctious, rolling melody usually designed for children to bellow in school assemblies. And, despite the claim that he’s “a sickening wreck”, this is still a pretty cathartic song for anyone thinking about sacking off their terrible job. (For those of us lacking the mettle to call their manager a “flatulent pain in the arse”, it’s still a perfectly adequate soundtrack for drafting nervous letters of resignation.)

Then the album changes gear. I Know It’s Over is seminal Smiths, a sombre yet delicate take on losing hope and being at a total loss about what to do next. It’s a self-doubt quite at odds with the decisive, chiming emancipation of Frankly Mr Shankly. The effect is slightly tarnished, however, by the decision to tack on Never Had No One Ever immediately afterwards. This is a track as laden with self-pity as its title suggests, a hangdog tale of rejection and abandonment, and definitely not the song you’d pick if you were trying to make a case for The Smiths as a life-affirming band (sample lyric: “I’m alone, I’m alone, I’m alone I’m alone I’m alone”). Paired together, the two songs allow for nearly ten minutes blissful wallowing, but who wants to own up to that?

Having sunk to these mawkish depths, Morrissey’s next stop is . . . a graveyard . . . with Cemetry Gates, his paean to plagiarism. In this track, Morrissey and an imagined companion are playing a game of literary oneupmanship in which they quote lines of doggerel at one another while citing various poets. So far: insufferable. But as he whinnies that “If you must write prose and poems, the words you use should be your own”, it soon becomes clear he’s poking fun at his detractors. The Smiths wouldn’t be The Smiths without Morrissey’s habit of appropriating material from other sources. The Queen Is Dead, just like previous releases, is a patchwork of his own fairly niche influences: the cover image is a still from L’Insoumis, a 1964 film noir, the title is from a chapter of Last Exit To Brooklyn, and quotations poached from various films and plays are scattered throughout the songs. The Smiths were a band still in touch with the past — but it was their past, a cultural legacy they had put together for no one but themselves.

Albums both old and new! Check out our archive of write ups on classic and future classic albums.

Given that Morrissey was routinely derided by the British press for being “miserable”, the graveyard seems an appropriate landscape — but never fear, he’s not about to exhume anybody. Wandering among the headstones, he is suddenly overcome with the realisation that all of the inscriptions aren’t as solemn and upstanding as they first seem: each mark the lives of ordinary people “with loves, and hates, and passions just like mine”. Sadness and death are, for once, universal experiences rather than just an albatross about his own skinny neck. Coupled with Marr’s stirring major/minor chord progression, this is one of the strongest songs on the album.

Bigmouth Strikes Again and The Boy With a Thorn In His Side both deal with remorse, although from slightly different angles. Bigmouth Strikes Again sees Morrissey offering an insouciant apology for causing offence (“Sweetness, I was only joking when I said by rights you should be bludgeoned in your bed”) just as he did earlier in The Queen Is Dead (“Her very lowness with her head in a swing, I’m truly sorry but it sounds like a wonderful thing”). Though he volunteers himself as a martyr, the listener knows he’s just being facetious, and the backing vocal — in fact Morrissey’s own voice sped up to a hideous infantile whine — echoes this.

Meanwhile The Boy With A Thorn In His Side is a more sympathetic portrait of a misunderstood young man who despite (or because of) his “murderous desire for love”  manages to keep others forever at bay. Morrissey’s suffering is his raison dêtre, of course, and in later material this often comes across as cantankerous, but here it’s little more than . . . human. For all his caustic outbursts he is, after all, highly vulnerable to all of the criticism and contempt fired his way.

And then there’s the fey, eccentric tracks that might sit better in a Blackpool music hall. Vicar In A Tutu is a hammy, trite little number that is as English as a village fête; the kind of England that exists only in Sunday night dramatizations. Some Girls Are Bigger Than Others, the final song on the record, is equally flippant. Rather than close the album with any kind of obvious swan song (and they’re The Smiths! They have their pick of swan songs!), Morrissey instead decides to sign off with a rumination on women’s breasts. As he explained, jovially, to the NME: “The fact that I’ve scuttled through 26 years of life without ever noticing that the contours of the body are different is an outrageous farce!”

But back to swan songs. There Is A Light That Never Goes Out, the penultimate track, needs little introduction. Retaining the self-destructive, internalised despair of I Know It’s Over and Never Had No One Ever, it nevertheless carries an uplifting quality that those songs lack. It’s a sort-of love song, except not really, because the person he’s singing to doesn’t realise the depth of his feelings. Just when he almost plucks up the courage to confess: “A strange fear gripped me and I just couldn’t ask”.

Yet faced with the prospect of imminent death, Morrissey reflects that the only thing that matters is that one person’s company in that single moment — everything else can be annihilated. And if a fatal car crash is the closest thing he has to pillow talk, then so be it. Morrissey loved the idea of a hero whose days were numbered, who recognised the futility of carrying on, but this time he is able to extend that urgency beyond himself.

Revisiting this album, it feels less of a coherent statement of intent than we had first imagined.

The title track is the only one which directly challenges the status quo, and most of the songs are more personal than political. And yet, it’s an album which speaks with iconoclastic and brutal honesty about how it feels to be on the outside. For all the smatterings of silliness and woebegone asides, the prevailing message of The Queen Is Dead is its refusal to apologise. Stop grovelling, it snaps, stop doffing your cap to your captor.

As I write this, it’s the Queen’s birthday. The BBC has announced that she is being presented with an orange drizzle cake with a buttercream and marmalade filling. People are lining the streets to cheer and David Cameron is simpering his gratitude for her services to “our nation” while public services deteriorate and the papers spin out feverish dispatches on Holly Willoughby wearing a yellow dress. Seems we need this album now as much as we ever did.