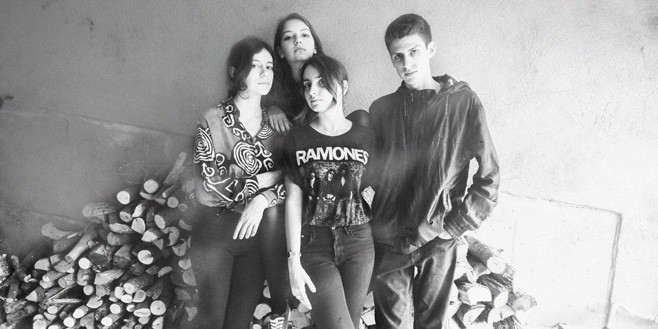 As Getintothis’ Matthew Wood returns to the world of music after the silence of exams ceases, he’s greeted with Toronto’s finest pop outfit, some gloomy Spaniards and a taste of the future from the kings of New York.

Catalonian teens MOURN follow their eponymous debut with Ha, Ha, He; another onslaught of gutsy punk that exudes a wisdom beyond their years.

Harnessing a sound that’s somewhere in between their Spanish counterparts Hinds, and the raucous, devastating rock of At The Drive In, it’s simplistic, jarring and downright inspirational.

The album is out now, go get yer grubby mitts on it!

Recalling the soundtrack you’re likely to find attached to your favourite Nordic Noir Scandi drama, Scotland-based Ben Chatwin captivates his listeners, conjuring atmospheric glaciers of sound via a skilful hand in the world of electronica.

Inflexion is a sinister as it is short lived, doused in a sense of foreboding. It tiptoes cunningly before dark, industrial sheets of sound begin to envelop the track, painting bleak images of cargo ships battling with a malevolent storm.

His second album Heat and Entropy is available to preorder now and hits the shelves July 29.

RALPH – Cold To The Touch

Raffa Weyman (aka RALPH) and Pop are like this (crosses middle finger and forefinger), they go way back, they’re indebted to each other. These are probably lines that would crop up were Pop-personified and RALPH to be in the same room together.

Awash with magical pop motifs, taking leaves from the book of greats, this Toronto-based gem seems to have unlocked a vast chest cocked full of musical treasures just in time for Summer.

Cold To The Touch grooves with some vintage cool carried straight from 70’s and 80’s disco but is coated in that shimmering pop glaze that is likely to earn this track a ticket to the stars.

Factory Floor – Dial Me In

One for the early hours; a hypnotic dose of no wave dance born for the world of relentless partying and mind transportation.

Serving as 1/8th of the London-based duo’s (formerly trio) first original album since their self-titled debut back in 2013, 25 25 marks a new chapter in the band’s career and Dial Me In is a segue into pastures new.

The full album is out August 19 on DFA Records, get amongst it.

Sixteen years on from the release of the near perfect Since I Left You, The Avalanches return with verses from Danny Brown and MF DOOM in their arsenal, pockets full of addictive, hallucinogenic yellow gloop… and a cheeky sample that your mum will love even if you don’t.

With the immutable success of the band’s debut album, the Aussie trio were going to have to produce something really special to effectively follow it up , so special it has taken them over a decade to promise us 21 tracks and an influx of superstar collaborations.

Frankie Sinatra plays it relatively safe with a calypso fuelled groove and a uniform hook, which is by all means brilliant, but not yet breathtaking. MF DOOM oozes his cool briefly onto the wax, but can’t propel the track much further than ‘a decent tune’. Let’s just hope they shot up some more of that yellow gloop for the remainder of the album…

Palm Honey – You Stole My Blackout

Psych-poppers Palm Honey are one for those Blossoms fans out there, embodying a sound that’s somewhere between the Stockport lads’ early dark psych and their later, radio-friendly, “let’s take over the world” mentality.

The Reading quartet offer a fantastically inventive sound that flings influences into the mix and handles them effortlessly. Off-kilter funk interludes alongside upright bursting synth hooks make for a neat, eclectic finish.

A mind-bending finale sends the track hurtling to unknown heights with warped synths and a chant-worthy riff, nodding to their more kaleidoscopic counterparts.

White Room – Think Too Much

Maturing by the minute, these fellas have come a long way since their Sound City slot last year. Channeling a vein of the classic psych revival that Temples did so well, encrusted with a Modish swagger, Think Too Much is arguably the band’s most refined, polished track to date.

Vocalist Jake Smallwood takes a step closer to inevitable rock icon with every track they release, with a clever use of delay in this one, his vintage vocal carves itself a whole new facet, sounding both reminiscent and progressive simultaneously.

Step into the world of White Room, it promises a far more chromatic experience than the name might suggest.

The Strokes are back! Their latest EP Titled Future Present Past offers three tracks (plus a remix by Mr. Fab Moretti), one that harks back to the early days – Threat Of Joy (PAST), while OBLIVIUS sounds very much like an Angles follow up (PRESENT) and this tripped-out number delves right into the 80’s, but arguably gives us a taster of the FUTURE sound of The Strokes.

By far the most experimental track from one of the finest rock bands since the millennium, Julian Casablancas seems to hold the reigns in this one with the similarities to his latest project with The Voidz shining through.

A gloomy string section lays the foundations, while Casablancas sounds like he’s trapped in a GameBoy, disheartened with the world’s “fucked up system”, holding up two fingers to any traditional lyrical approach.

The video is as whacked out as the track, have a gander.

Trying her hand at all things creative, the multi-talented Lakisha Kimberly “Kish” Robinson provides us with a vibrant music video to accompany her bouncy, jazz infused bundle of fun.

Cramming more melody into less than 2 minutes than some vocalist manage in a lifetime, Kish will wriggle her way into your head in a matter of seconds and have you bopping to the bursting brass and boggling at the time changes.

You won’t hear anything like this today, I promise you.

I can’t say I’d ever heard any Italian Reggae before I stumbled upon this one, but what a flippin’ delight it is.

As irresistible as a boogie and a BBQ down by the ocean, or the ‘mare’ if you prefer, Mama Marjas knows how to move, and even better she knows how to get everyone else moving.

Chocked full of Latino horns and first-rate reggae grooves, it’d be plain daft not to stick this one on your summer playlist.

At this day in age there’s only so many tropical delayed riffs and hi-hat flurries you can take before you want to burn a few records by The 1975 and stick on anything pre-Foals.

PLAZA may have fallen into this trap to some extent, but they seem largely aware that those finely plucked riffs and off beat snares aren’t enough anymore, so they naturally step it up a notch.

Interludes of scorching, abrasive guitars act like brief Tsunami waves, blowing all that came before out of the water before returning to their playful licks and tricks.

Pristine and finely mastered, Blood Orange is a well rounded track, brimming with talent and you can witness such talent at Maguire’s Pizza Bar on June 13.