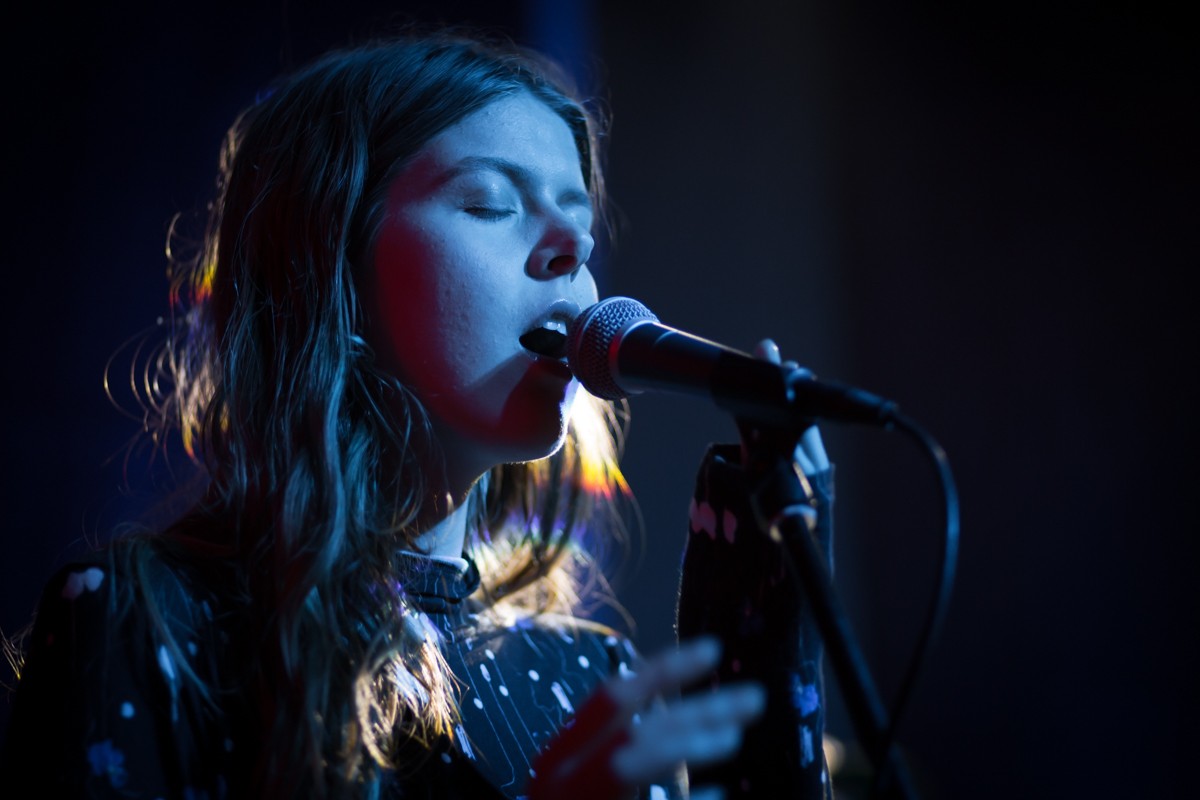 Feral Love and Samaris take on a night of synth dream pop with whispered vocals and Getintothis’ Daisy Scott saw hearts being stolen.

Sometimes it’s not easy being a support band, but there were no such problems for Liverpool’s electronic duo Feral Love, as they kicked the night off for Iceland’s Samaris at Leaf.

A welcome break from what can seem at times as an all-pervasive and all-dominant guitar-based scene, Feral Love’s electronic-pop soundscapes are reminiscent of an earlier time, yet with some distinct similarities to bands such as CHVRCHES.  Front-woman Adele Emmas displayed a charisma that not only had the whole audience at Leaf wrapped around her fingers, but also stole a few a hearts as well.

Adding a different touch to a totally synth-based format, guitarist Christian Sandford deftly added and whipped through riffs which gave their dimly lit set an even greater and deeper feeling of melancholia.

The highlight of the set for us was the recent single, Like The Wind. Astutely picked up by BBC Radio 1 Play, it goes to show that Feral Love are more than a bunch of ethereal and noodling synths. ‘I am fine with the way I am/In my eyes you’re like fire.’ and with lyrics like that Feral Love demonstrate they are a force to be reckoned with.

Hot on the heels of Feral Love came Iceland’s very own synth-based, whimsical and husky voiced Samaris. Complete with disco balls and blinding circus lights, they picked up from where Feral Love had left off, electro-synths and all.

There’s always something about artists from Iceland-see Bjork, Sigur Ros, Mum et al- and Samaris are no exception. Maybe it’s something to do about singing in Icelandic, not the first language of this writer and probably not many others at Leaf, but Samaris are not ones to hide their eccentricities and haven’t done since they were formed in 2011. And like Bjork and the rest, they don’t hold back.

You could well imagine stumbling across Samaris by pure chance at in a small tent at a festival and they’d certainly be something you’d remember.

Coincidentally, Samaris’ latest album  Black Lights  was released on the day of the gig and they obviously wanted one of the highlights of the set to be the album track T4ngled . A fully-fledged heavy bassline rumbled through the very fabric of the building and clearly resonated with the audience as well. Although Samaris were trying to make the point that they were the headline act, the distinctly Tame Impala-like synthy inflections didn’t mark them out as particularly unique with this song. Maybe they should keep the eccentricities to the fore.

In the end, it was one of those evenings when the line- up could have easily switched around with the home-grown support act proving to be more charismatic and memorable than the main draw.