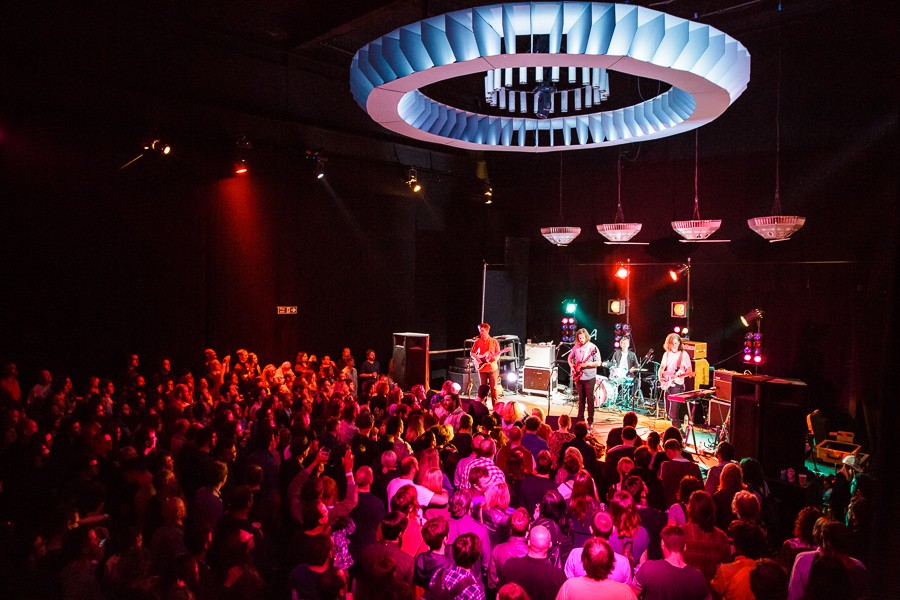 As the American gang crosses the water to attack the European leg of their tour, Getintothis’ Joe Giess eagerly ate up the audio delights at a packed Wind Factory.

An erratic day of tropical weather can’t even mar the excitement for Parquet Courts’ return to Liverpool. The doors open and the cavernous hub starts to fill up, as we all come to witness the baptism of the Invisible Wind Factory, for its first big concert.

Shapes and shadows start to oscillate on the stage and a pointed drone pierces through the room, Housewives have arrived. Their rhythmic battery opens the bill. They create an undulating landscape of cacophonous noise; picture a splatter paint artist replicating a Francis Bacon painting.

A relentless, jarring set by the London band, with a sound that sometimes leans into the noise idiom of Sonic Youth and The Fall. All around great incisive guitar work and assaulting vocals, a band with a real penetrative quality.

As the group dissembles, it’s time for a brief pause for a stop off at the bar and a smoke, but before you can blink Parquet Courts are on the stage. The crowd is crammed together, pints wobbling overhead like spinning plates as people jostle for the best view. Out of the bedlam, the band burst forth with the rolling bass line and unmistakable opening chords of One Man, No City.

Barely a moment to catch a breath, they fire off song after song as a tight unit, the set is dotted with primal, quick bursts of aggression with I Was Just Here and the psychedelic coated Captive Of The Sun, as they stand all the while with gritted teeth and dripping sweat, you can’t help but think back to the DIY punk of The Minutemen.

Although the songs from Human Performance are undeniable crowd-pleasers, it seems that the classics from Light Up Gold come across as the favourites. Master of My Craft erupts the crowd, then the band seamlessly slide into the chugging and jangling, Borrowed Time, to send the crowd into a frenzy.

The band is brimming with bountiful personality, at times inscrutable, in others, completely convivial, their overall presence is utterly magnetic. They riff off the crowd’s energy: “I could almost hear a pin drop.” They joke as the lead guitarist butters up the crowd with Liverpudlian guff, playing the opening refrain to The Beatles’ Dig A Pony

The bitter barking of Savage keeps the fans fuelled as he foams at the mouth, howling the words of Two Dead Cops. The formula of punk rawness channeled through cerebral droning is like watching a whistling kettle in mid-explosion, splashing all witnesses with its boiling contents.

Ultimately, it’s hard to refute the notion the Brooklynites were on top form for an absolutely chock-a-block Wind Factory gig. Tonight was a make or break moment for the team, with this being the debut of its first big concert, and the result was ultimately quite special. The band they picked to do the honours steamrolled through the night with a fantastic set from start to finish, as Andrew Savage said himself:“You guys should be proud of what you’ve got here, it’s something really special.”