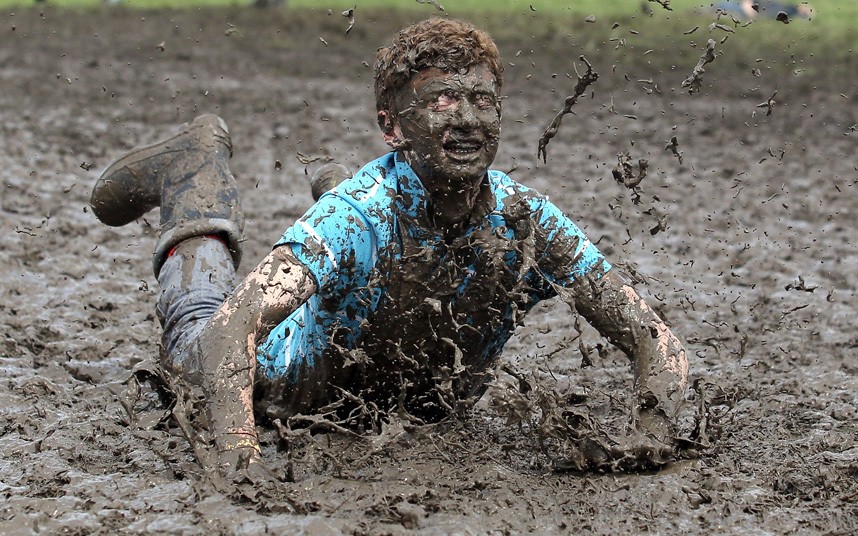 Following the storms at Download and Rock AM Festival, Getintothis’ Banjo takes a look at the often unhappy marriage of festivals and weather.

Festivals and bad weather, the two seem to go together far too well and far too often.  Images of barely recognisable human beings swan diving into liquid mud have become a media cliché in the weekend papers. So much so that photographers at Glastonbury can be seen congregating hungrily around any muddy areas, in much the same manner as hippos at a watering hole, trying to persuade friendly festival goers to jump in the mud so they can scandalise their readers.

People being exposed to the arbitrary nature of the great outdoors can easily come off worse, but weather so bad that scores of people are hospitalised two years in a row is on another level entirely. At Germany’s Rock AM festival a couple of weeks ago, lightning struck the site with such ferocity that 72 people were rushed to hospital, with 8 of those reported to be seriously hurt. The weather forced organisers to cancel several performances on the Saturday, reopening later for the Red Hot Chilli Peppers headline set. However, the lightning ramped up again, forcing the festival to close for good early on the Sunday. And as if this wasn’t bad enough, last year’s event was also hit by lightning, with 33 people being taken to hospital in what one hopes is not becoming a new festival tradition.

Last weekend’s Download was hit hard, which seems especially cruel given the rain free weeks with prolonged sunshine that preceded the event. This would undoubtedly have added extra layers of enjoyment to the festival, even if it came at the expense of some people, on stage and in the audience, having their artfully cultivated porcelain complection exposed to the sun for the first time in what one would assume is many years. Video footage of a river of water running through people’s tents brings a shudder to festival goers, whether they were in attendance or not. We can only hope that the deluge did not ruin the festival for people and that despite floods of near biblical proportions they found the performances worthwhile.

A common cliché that comes out when Brits have to endure extremes of bad weather is to refer to a ‘Dunkirk spirit‘, as if those present, when presented with a calamity, join together in common unity, put on a brave face and enjoy themselves just as much, if not more, than if things went smoothly.

This is of course nonsense, a festival covered in several inches of mud, with huge areas of liquid ooze that have to be waded through and with nowhere to sit and drink in happy communion with your fellow guests is a very different beast than one at which the sun shines. The happy, easy going vibe is replaced by an air of having to get through it, of slogging it out and trying to make the best of a bad lot. As a survivor of some 47 festivals, this writer has seen many a promising start turn to a slushy disappointment within hours.

With Glastonbury on the horizon, Getintothis Craig MacDonald picks the Ones to Watch from the North West at this year’s event.

As mentioned, Glastonbury must surely be the daddy of the bad weather festival, at least in the public perception. Taking place as it does in Britain, in June, the UK’s notoriously temperamental weather can make its presence a major feature and talking point of the world’s greatest festival.  To be fair to Glastonbury, despite its reputation for mud and flooding, the weather history for the area shows it to be neither excessively wet nor excessively sunny. The main problem with Glastonbury is that if it does rain, there are in excess of 350,000 feet tramping over the ground, turning whatever water there is into the mud of legend. Add to this above mentioned mud-obsessed journalists and television crews from around the world, desperate for an image that fits with their stereotyped idea of the festival and it is perhaps no surprise that a mud-caked punter is the default image.

2005 was a particularly bad year for Glastonbury, with legendary images of tents under several feet of water. Images of campers actually swimming to their tents to retrieve their belongings must still strike fear into even the most hardened of Glastonbury veterans in the run up to this year’s event. One tale of surviving in style involved an unlucky soul camped in the flooded area, who waded to his tent, gathered his belonging, piled them in his car and fled to Bristol. Here he threw all his soaked clothing into a launderette, bought a new tent and enjoyed a hearty breakfast. Returning to the festival site, he put up his nice new tent in one of the dryer parts of the campsite and spent a day as the cleanest man at Glastonbury. 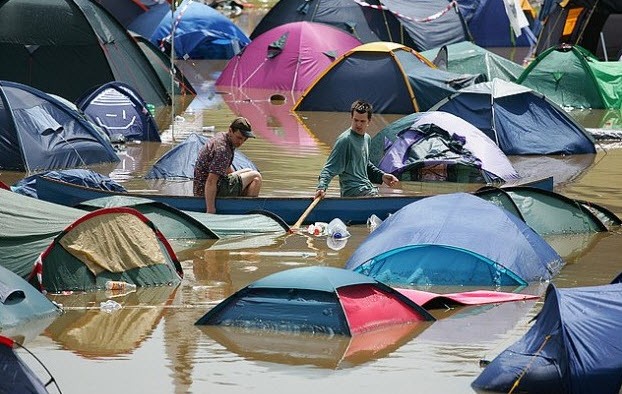 The campsite at Glastonbury 2005 – photograph by Andrew Kendall

Reading Festival is also no stranger to weather based catastrophes. This writer attended in 1992 when winds worthy of a disaster movie tore the second stage from its moorings and, for a moment, seemed hell bent on creating perhaps the world’s biggest kite. Only the valiant efforts of Reading’s burly and, one presumes, very heavy security team kept the tent land based and, following great effort, reattached it to its base so that gigs could resume there the following day.  My own tent died a noble death when a particularly vindictive gale blew full in the tent’s face (do tents have faces?) and tore it right down the middle, forcing us to seek shelter in a friends’ two man tube. We got pretty closely acquainted at that festival, I don’t mind telling you. Shouting foul oaths at the tattered remains of my traitorous tent, we drove a pole through its heart before we left, just in case.

Creamfields 2012 also had a pretty grim time of it, with its last day being cancelled after excessive rainfall.  For a two day festival this must have been grim news for those who had bought tickets, taken time off work and travelled to get there, but add in gridlocked car parks and interminable queues for public transport brought about by an unexpected mass exodus and it turns what should be a euphoric, stress free weekend turns  into a drenched disappointment.

There are occasionally more tragic consequences; a storm at Belgium’s Pukkelpop caused the death of 5 people in 2011. Harrowing video footage shows the daytime skies turn black amid hideous sheets of rain and hail, with people seeking shelter as tents, clothing and festival detritus blow around them, literally running for their lives.

Those of you headed to a festival over the next few threatening months, fear not. Yes the weather may do its best to  spoil the experience, but the bands will be brilliant, the atmosphere will be magical and you will have stories to tell and remember, come rain or shine, so get stuck in. Only, you know, not literally.