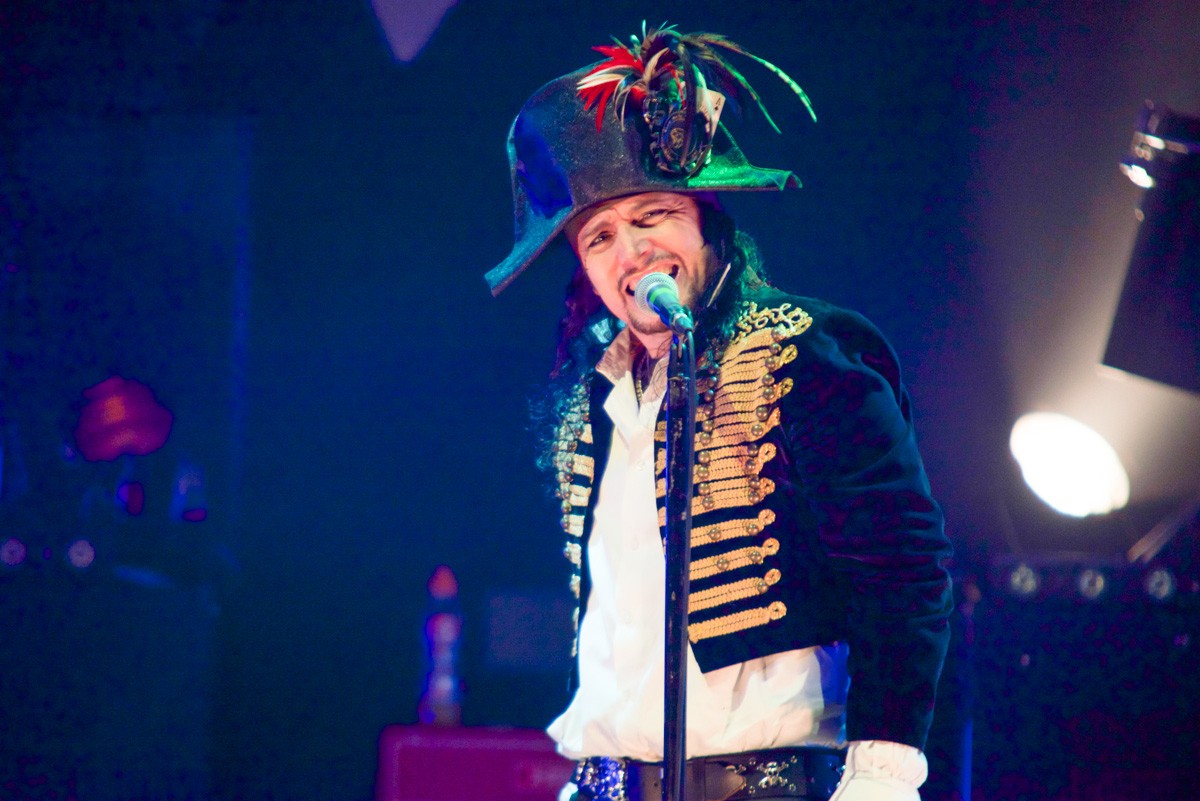 Performing his classic Kings of the Wild Frontier album in full, Getintothis’ Shaun Ponsonby sees Adam Ant captivate the devoted at the Phil.

It’s a hot summers night, and the feeling in the air matches the heat. Adam Ant is in town to celebrate the 35th anniversary of his classic album Kings of the Wild Frontier. It’s the record that turned him from underground punk to Top of the Pops mainstay, and a large chunk of the audience come dressed accordingly in the tribal and pirate costume that Adam wore with the (second) original Ants back in 1981. “Maybe there’s a convention on or something,” we overhear from one slightly bemused passer by.

As we made our way into the beautiful surroundings of the Philharmonic Hall, we found ourselves in the middle of a bit of a jarring culture shock to begin with. Ant‘s support act on this tour is UK Feds, who recall an earlier phase of Adam‘s career. They were a much more intense act than we would have expected tonight, and were all the better for it. With a frontman in a balaclava and proclaiming “Our country is run by a punch of pricks. David Cameron is a prick,” it appeared to be too much for some of the crowd, some of whom left the auditorium. It is unlikely that The Phil sees their like very often.

The ones who stayed, though, loved them (us included) and – whether advertently or not – they provided an extra dimension to the night. Adam & The Ants’ early performances were known to be one of the most intense of the punk bands of the era, before Adam embraced pop. It almost seemed like a slight hark back to those days before Adam burst on to play Kings of the Wild Frontier.

It is clear from not only the sell out crowd, but also their enthusiasm, that Adam Ant still has a devoted fan base. The minute the house lights went down, the screams filled the room and – unusually for The Phil – literally everybody was immediately on their feet.

The album performance took up the first half of the show, with Ant in full costume. The opening tracks on the album are two of The Ants‘ biggest hits; Dog Eat Dog and Ant Music. With Dog Eat Dog in particular, it is fascinating to think there was a time when this could be considered a pop record. It isn’t the kind of watered down, cheap sounding 80s synth that most people would expect from an 80s pop star. It is alert, vital, heavy and experimental. The fact that this was his breakthrough hit is a little astonishing.

But then the whole album is that way. This remains an ageless, wildly inventive and exciting pop album. It doesn’t sound like anything else. Those tribal drums, those chugging guitars, Adam‘s yelps and yodels. It is pop, but it is not safe. What’s more, it is actually about something. There’s history in there. It stands for individualism and self-empowerment. It’s OK not to be like the rest. If they don’t get it, fuck ’em.

Find out what happened when Adam Ant returned to his punk roots by playing Dirk Wears White Sox at the Arts Club last year.

Last year, Adam played a small show at the Arts Club, where he performed the entirety of debut album Dirk Wears White Sox and concentrated on his punk roots. This show is much more theatrical and suits this particular theatre alarmingly well. The extra lights and effects make the show feel bigger, though as much as it suited the album, we’re not sure if this performance matched the rebirth of last year’s.

Adam himself doesn’t let up to address the audience until after the Kings… performance, and when he does the crowd goes nuts. His audience are still hugely devoted, and on stage he defies his 61 years by striking a peculiar balance of punk bravado and borderline camp showmanship. He is fully in control. All he has to do is look at the crowd at they scream.

Following the album performance he delves into his back catalogue, mixing up big hits (Stand and Deliver, Prince Charming, Desperate But Not Serious, Goody Two Shoes – which, if we’re honest, we’re never sure has worked without the horns) and personal favourites (Never Trust a Man (WIth Egg on His Face), Cartrouble, Zerox, Press Darlings, Beat My Guest).

Adam‘s encores have been more or less static to a certain degree since his live return, and sure enough after dedicating the performance to Muhammed Ali, it was obscure b-side Red Scab leading into T. Rex‘s Get It On. As much fun as the T. Rex tribute was, we surely can’t be the only ones who might have preferred to hear Puss In Boots, Strip or something from 2013’s brilliantly titled Adam Ant Is The Blueblack Hussar in Marrying The Gunner’s Daughter.

As Physical proved that it remains one of the sexiest rock songs ever written, the audience left elated. But we couldn’t help wonder what is next for Adam. He has always been one of the more interesting artists that the UK has produced. After two back-to-back tours playing classic albums, it feels like it might be time for the kind of bold change in direction that he did so often in the 80s.