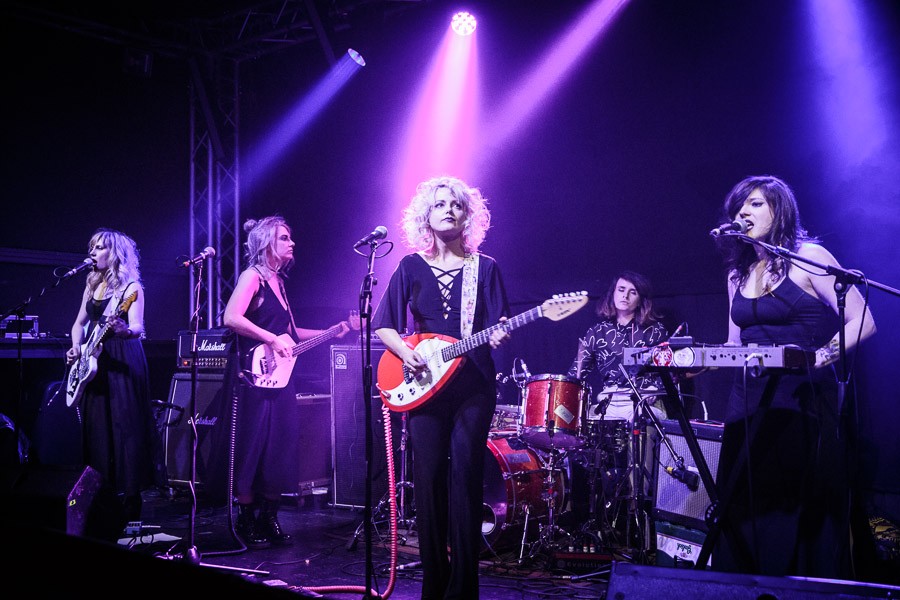 With a line up packed with punk-pop punch from start to finish, Getintothis’ Amaan Khan enjoys the refined sounds of September Girls.

The laziness of the summer and the Sunday has probably taken over a lot of Liverpudlians as we find the upper floor of The Arts Club only quarter filled. However, most of the members of the audience are ardent fans of the night’s acts, and both them and the artists engage with each other enough to support the vibe and energy needed for a good live experience.

The evening kicks off with Scarlet. Lately, Liverpool has been seeing Scarlet more and more frequently, having had a dose of the band at FestEvol, Threshold Festival and also when they supported PINS at the O2 Academy earlier this year. Tonight too, even with a substitute bassist, they manage their consistent and seasoned quality and feel right at home.

With the first song, one gets the impression that the band is like a punkier version of The Cranberries. With the second song, we realise how wrong that judgement is. After the first, frontwoman Jessie Robinson keeps the guitar down and lets the music move her a little. With her, the crowd begins to move too. After looking around to find the heads bobbing, the feet tapping and a few shoulders swaying even when the crowd is relatively small, you realise her potential as a frontwoman. While there remains a room for improvement in the sound, Scarlet is already an appealing act whose musical growth is worth anticipating.

Taking charge from Scarlet, after a considerable wait, is Telegram. A London based band that is familiar to the city having performed here over the years. The first noticeable thing about the group are the hair-rock personas of the member with hairstyles that seem to belong to four different decades between the 60s and the grunge era of 90s.

While, not quite as engaging with the audience on this particular evening as their predecessor was, their sound is more refined and the songs smoothly flow into one another. Musically, much like their hair, they take 90s grunge and 70s punk and put them into a modern context. The first few songs are enough to question why not enough punk bands creatively use effects on their vocals during a live performance (No, we’re not talking of auto-tune!).

If Scarlet meant intimacy and Telegram was all about energy, then the main act tonight is a lesson of how to put those two together.

Liverpool loves a package. Whether it be a package of a glittery punk-pop quintet or a colourful psych-pop trio, we are, maybe subconsciously or maybe consciously, drawn to well-defined styles. September Girls offer an equally designed package of goth, psych and witchy stuff with the flavours of their Irish roots. Except for a slightly bothering guitar strap with Barbie-like figures on it, the girl’s all-black witchy appearance comes off very wholesome.

As four ladies take the stage and play to a slow heavy groove from a drum machine, a fifth walks in as majestically as a tigress dressed in formal suit and trousers. As soon as the singing begins, it becomes clear why this band is shuffled between the labels of noise-pop and punk. Punk was never strongly associated with clever lyrics and intricate vocal harmonies. September Girls are punk but with all those skills strongly present. The spoken and almost shouted out words like “if I could swim, I’d be dead by now” from Veneer are example enough of their poetic quality.

After paying acknowledgement to their hairdresser and the frenzied dancing in the front, and discussing a place to eat after the gig (Blind Tiger opposite the venue was the apparent decision), the band ended the set with their most hypnotic number and an unheeded demand of an encore. While being a usual gig at the end of a musically amazing week, the evening showcased three acts whose future development is certain, needed and well worth watching.