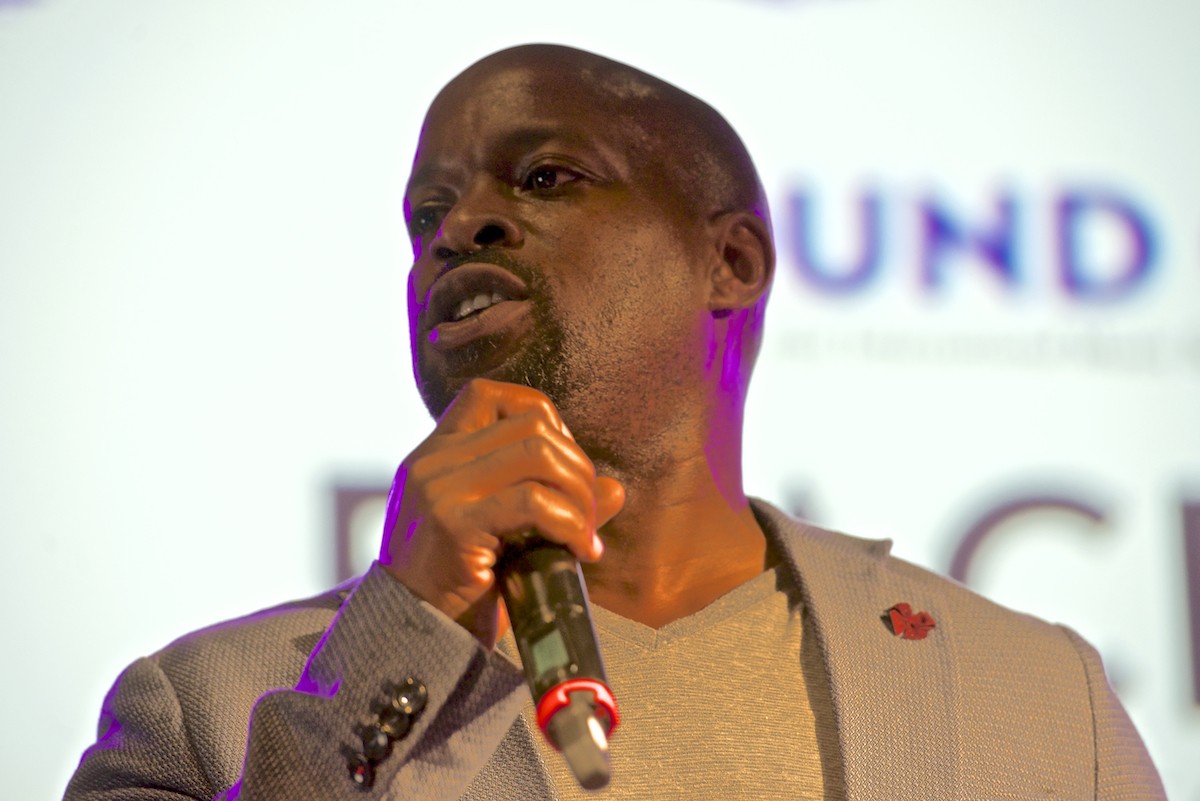 Liverpool Sound City+ is the newly rebranded conference and industry element to this their ninth festival and their second at the north docklands-based Titanic Hotel.

The major shift with the 2016 edition is the concept of bringing the boutique – or household name speakers – into the main music-focused days of the festival; so the likes of actor and director Paddy Considine, musician Roisin Murphy and comedian Alexei Sayle are reserved for the Saturday and Sunday of this year’s festival.

Instead, Friday’s conference, hosted within the rustic grandeur of the Titanic Hotel, is weighted towards smaller forums, key note sessions, industry heads and Alan McGee.

Liverpool singer songwriter Charlie Airey nudged us into the day. He drew the short straw as the first of the bitesize acoustic sets in the main foyer. With queuing delegates’ noses buried into programmes, he has a keen-eared audience anyway. Having made an impression at the Sofar Sounds show last year, this young jazz singer continues to prick our ears with new single On’n’On (out this weekend) while I’ve Been Flying is another highlight in this early daytime set. He plays the Merseyrail Sound Acoustic Stage at 7.30pm tomorrow (Saturday).

The TED-style talks follow in The Dream Factory, and unfortunately they’re akin to 45 minute lectures not unlike the inspirational quotes you find on Facebook. The remainder of The Dream Factory is full of stalls, the noise of networking and sealed deals turn into a dull roar, muffling speakers and diluting the overall experience. A simple cornering the stage off completely or putting in another room would have been better but instead, like last year’s music-bleeding stages on the main site, this irritation extends to the conference.

Matt Parson from digital music distributor Ditto Music tells us of his own rocky path to rock n roll stardom – it didn’t happen – and how he went on to build Ditto with brother, Lee. They started Average Bear Records at home in Birmingham, with the label morphing into the successful sync operation homed in Liverpool in 2006. The following year they released the single Blag, Steal and Borrow by Colchester band Koopa. It became the first digital only single to reach the UK Top 40. Ditto Music has now clocked up 18 Top 40 releases, and in 2010 moved to Liverpool after attending to Sound City in 2009.

Parson shares his tips for newbies starting a record label, “What everyone else is doing, do the opposite. Be as Prince, Bowie and Steve Jobs. Life is a business plan, find your objective and work out the steps in between.”

This is all truly the stuff of memes, and Parsons provides us with homework, a list of books to read if we want to become ‘social chameleons’. The Game by Neil Strauss, the notorious guide on how to pick up women might help you pull and get what you want from any social situation. A win – win. The 48 Laws of Power by Robert Green aids your evolution as a creative person. And don’t forget How To Make Friends and Influence People by Dale Carnegie, The Five Temptations of a CEO by Patrick Lencioni, The New Science of Persuasion & Influence: Amazing Techniques to Get Everything You Want by Craig Beck.

Ultimately, you need to release great records and make money so you can stay in business, says Parson. Simples. Oh, and don’t be a dick. That’s very important, our favourite tip of the entire talk.

Against the stunning backdrop of the old Tobacco warehouse several of Liverpool’s emerging talents shined with assured patter and in many cases competent versatility. Guitar heads The Jackobins and Idle Frets, although lacking the energy of their full-band sounds, provided fine glimpses of acoustic swagger, while singer-songwriters Katie Mac and Cal Ruddy successfully plugged new tunes with raw songwriting and soulful tones. The former’s classic soul rock a standout.

When Alan McGee is interviewed by Dave Haslam mid-afternoon in The Dream Factory, there’s a danger this might turn into the warm snuggle of a nostalgia fest, the former Creation Records boss and Hacienda DJ musing over the good old days of Madchester and Britpop. And true enough, for a while the pair do indulge themselves; McGee seeing his infamous seven year period of drugs and 1990s good times as ‘successful creatively, but not financially’. Of Oasis, McGee imagines ‘they probably sent me a demo in 1991 that sounded like Echo & The Bunnymen’, but by 1994 they sounded ‘like themselves’.

Nowadays McGee is managing Black Grape and insists to Haslam and raised eyebrows around the room that Shaun Ryder has ‘changed since he got clean.  He’s straighter than me or you.’ Black Grape play a 21st Anniversary Tour of the first album It’s Great When You’re Straight… Yeah this November. McGee still manages The Jesus and Mary Chain and three months ago took on Cast.

“Do you manage anyone under the age of 45?” Dave Haslam asks cheekily. He does. Willow Robinson, the 22-year-old son of Withnail and I writer and director Bruce Robinson. Robinson’s first single Stones came out last month. 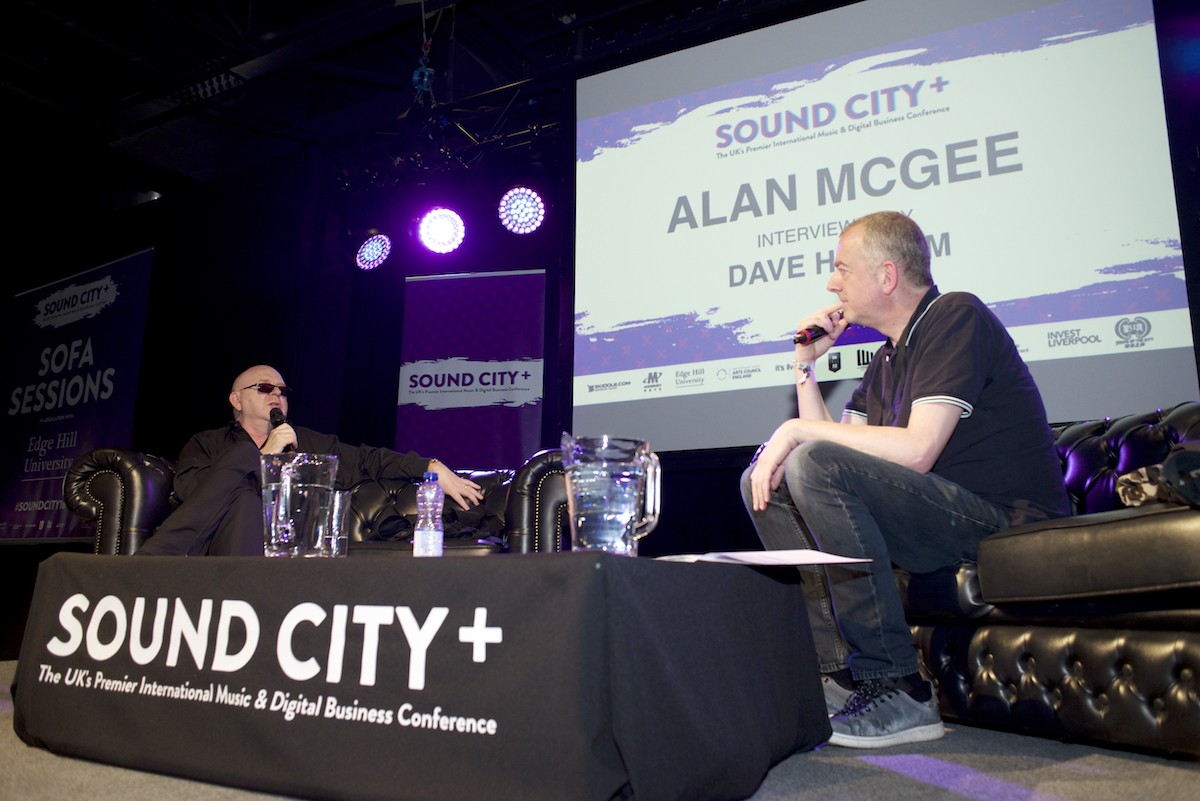 In conversation with Alan McGee

Haslam asks about Adele next, with her new £90m multiple album record deal with Sony, one of the highest in the past twenty years. A sign of good health in the music industry, or desperation?

Could that £90m be used to fund new artists and bands? McGee doesn’t really answer that, but reflects that Adele was at the end of her contract with XL. Business is business after all.

“I wouldn’t put Adele on but I wouldn’t turn it off if it came on the radio either,’ he says, and adds, ‘You’re (bands and artists) aren’t up against another band, you’re up against Instagram, Snapchat (these days).”

“I still try and do new music, new bands, but, if someone can sell out the O2 I’d be crazy not to manage them’. On the other hand, ‘How many 60 year old Mods do you know? The whole Mod thing has been going since 1922. I mean, give it a break. I find Mods more depressing, the Madchester things still sounds pretty good.”

McGee is the face of the Musicians Against Homelessness project, a series of fundraising gigs around the UK later in the year, money from the project going directly to homeless charity CRISIS.  Musicians have big hearts, he says. ‘Or they seem to have’.

Read our tips on the Top 10 International acts to see

Looking to the future, the film Creation Stories, based on McGee’s 2014 autobiography The Creation Records Story: Riots, Raves and Running a Label is currently in production. Trainspotting author Irvine Welsh is writing the script. McGee knows the actor playing him and the identity of the director but won’t say, because ‘I don’t care. I don’t give a fuck. (in the film) me and my dad are best buddies and (in real life) we’re not. It’s a load of bollocks.’

Such cynicism! Would he ever retire? Dave Haslam asks. “No. I tried to, and I nearly died. Musicians amuse me. They make me feel normal.” A rare moment behind the mask, perhaps? 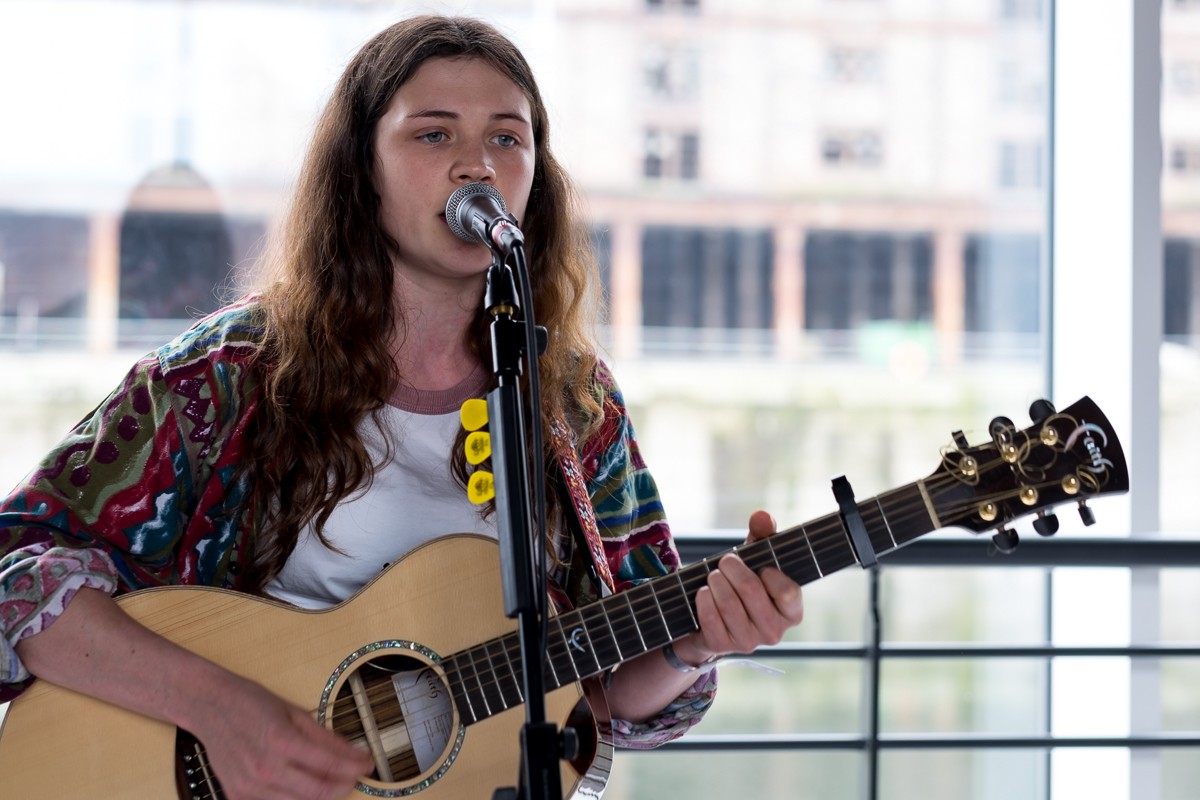 A number of panels were hosted by Drowned in Sound founder Sean Adams, including DIY or DIE, The Devil Is In The Data and Beyond Blogs, which featured Toby L of Transgressive Records, Miz DeShannon from Leeds College of Music, and Getintothis editor Peter Guy, who contributed to an interesting discussion on the importance and workings of independent blogs with references to broken biscuits. Toby L‘s insight into the beginnings of Transgressive and his own blog RockFeedback and how he signed acts such as Foals, while Tom Johnson of the blog GoldFlakePaint discussed his life as a blogger, promoter and founding a cassette only record label.

One of the big draws to Sound City+ this year was the Independent Label Market, which this year was named after the late Alan Wills of Deltasonic Records, and as an onlooker the room always seemed busy and bustling. However, after the discussion with Rich Walker of 4AD Records, business for the labels in attendance was completely underwhelming, and as he suggested, the event probably should have been open to the public rather than just delegates, who seemingly had no interest whatsoever in buying records. Whether this was reflective of the entire hall was another matter, as North West independents seemed to be happy to just be part of the whole affair and it was a neat addition to have the likes of Blak Hands and Ocean Wave along for the ride.

Dr Jennifer Otter Bickerdike’s Purple Rain: Why losing Prince hurts so hard: How death of a celebrity affects our lives is very much a personal tribute. She shows a short clip of Prince performing I Would Die 4 U and dares us not to weep. Sharing an image of a small black bag holding Prince’s ashes, Bickerdike struggles to imagine how the remains of someone as important to her as Prince seem so everyday, and unremarkable. It’s passionate and from the heart, whether it was anything more than one fan’s complete adoration for a music legend’s passing is open for debate.

Read our tips on the Top 10 UK acts to see

Ultimately, there was a different vibe to the Sound City conference this year to go along with its new name of Sound City+. Where in the past there has always been a buzz and excitement around the key note speakers and big name attractions such as Wayne Coyne and Edwyn Collins in 2015, this year’s conference felt more like a bit of a meet and greet with a few extras tagged alongside. Aside from Alan McGee (“Primal fucking Scream, man“) and a number of conversations and panels led by the ever impressive Dave Haslam, there was no blockbuster name to draw in the crowds like in previous years.

No must-see, defining moments of the conference element to the Titanic’s contribution to festival. It was all a bit ‘nice’. The beautiful weather was kind which drew much of the crowd out on to the water front terrace; the constant sound of mingling filled the air and everyone was having a rather lovely afternoon. Whether this stacked up to the delegate pass that Sound City is so committed to push was much more muddled. 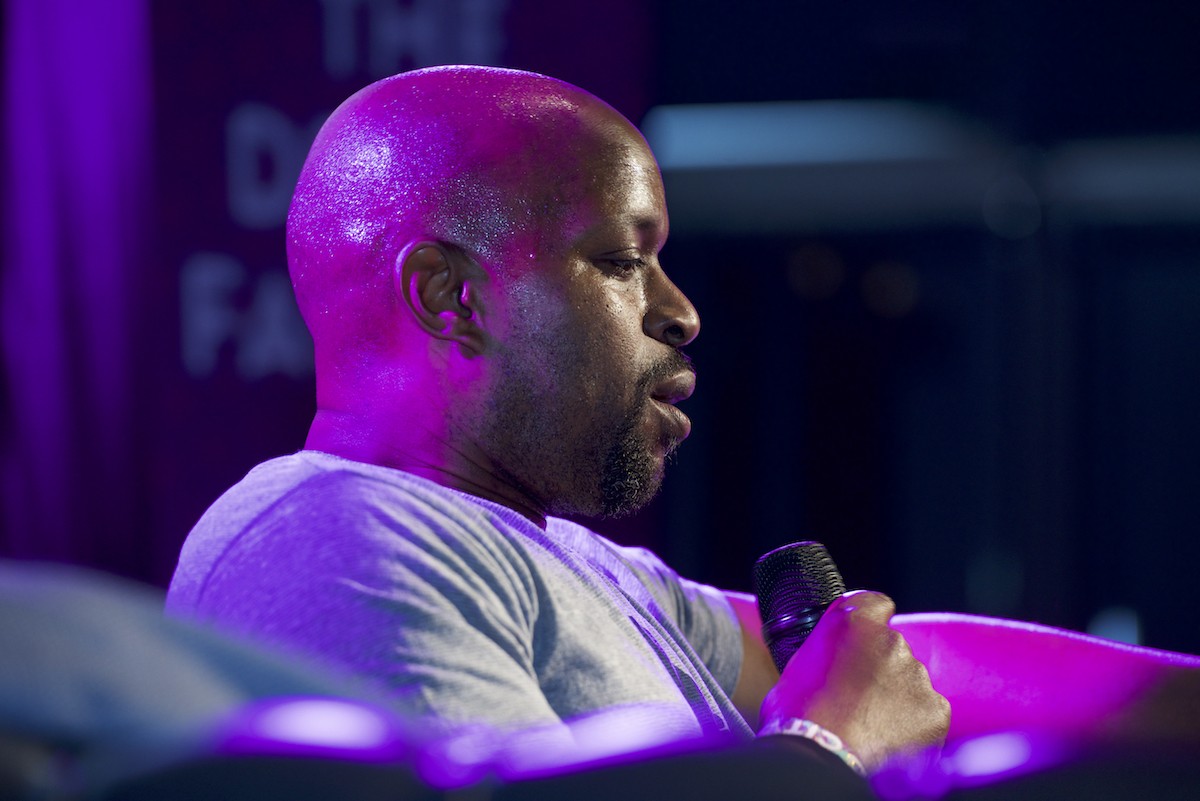 What is certain, where last year, the In Conversation and intimate performance by Edwyn Collins was spoke about long after it finished as one of the greatest moments in the festival’s existence, none of the day’s talks, panels or Sofa Sessions inspired much debate after their finish. They get contained and ultimately dry and staid.

Until the very end, that is. You could be forgiven for not being completely familiar with the work of Black Ice, a pioneering Def poet from Philadelphia. In fact, you might not have ever even heard of him. This writer admittedly hadn’t, and a few people we had spoken to earlier were in the same boat.

But it’s the unexpected highlights which you take away with you from a day like today, and remember for some time, and this was certainly that.

Once again hosted by Dave Haslam, the session began with Black Ice performing two of his poems. A performance so completely captivating that even a poetry skeptic would have been left in awe. A belter of a start.

Following on from this, the talk was again engaging, with Black Ice coming across as warm, intelligent and passionate as he discussed subjects from his upbringing and introductions to poetry and hip hop, to police brutality, Donald Trump and finding beauty in terrible situations. Closing with a performance and one of his poems, the session was a remarkable finale. An ending which probably saved it.

In conversation with Alan McGee