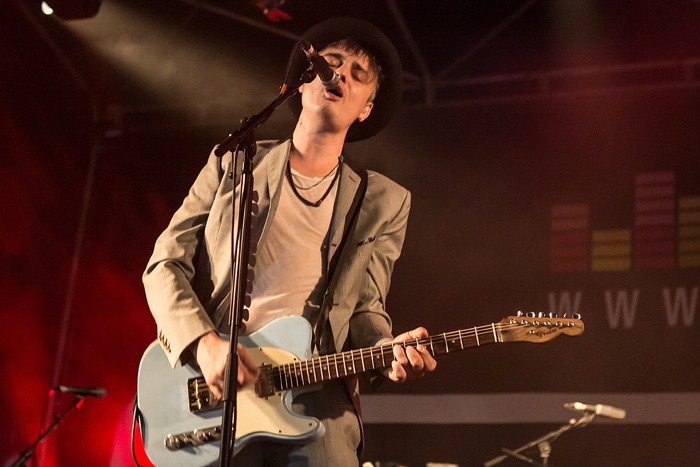 One of the biggest names at Sound City 2016 was headlining The North Stage, and Getintothis’ Cath Bore was there to check him out.

Student bands from Leeds College of Music open the day’s performances on the Cargo Stage. Caro, Heir, Kell and Fighting Caravans are each very much in early stages of development, so it takes until grunge band Brooders arrive to really lift the afternoon. But it is the University of Westminster who deliver fully, Tally Spear’s country songs markedly raising the bar. She shares new song Wrong Side of the Road, and does an effective cover of Neil Young’s Ohio though personally we’d prefer to hear more of her own work.

Blues band Goodbye Brighton, focussed around songwriters Mia Linnett and Dustin Price, follow on. So bloody good, Linnett and Spear are easily the most accomplished singers and performers on the stage all day, both are exceptional. Acoustic singer songwriters Karina Ramage and Rosie Blackaller are notable too.

On the North Stage in the evening, Glasgow’s Holy Esque impress. Typically using atmospheric effects to thicken their sound, live performance minimises that. And it works. With front man Pat Haynes, they have the presence of a stadium band.

Whilst Kagoule’s guitarist apologises for struggling with his new guitar, bass player and fellow singer Lucy Hatter shows her muscle as a theatrical and physical performer. Her vocals, reminiscent of Kate Bush, whether by accident or design, cut through a heavy grunge underlay.

Be sure to check out the rest of our Sound City 2016 coverage here.

The Big Moon bring with them a burst of colour and energy. Compared to every distinctive or alternative female musician at some point, tonight they stand out on their own, big time. Singer Juliette Jackson and her alt rock pop gang are as tight as fuck and buzzing.

When Dilly Dally come on stage, the Toronto punk four piece are made up with the reception. ‘This is so intense,’ says vocalist Katie Monks. ‘And you guys don’t know who the fuck we are!’. There’s something brattish about her yelpish vocals, but they demand attention, and gets it.

It comes to something when a gig by an enfant terrible such as Peter Doherty runs more smoothly than one by The Coral, merely yards away and delayed by power cuts. We never thought we’d see the day when Doherty bounds onstage energetically, and more crucially, on time, appealing for his bass player to get a move on and join the rest of the band. Doherty’s fans are thrilled he’s here at Sound City, the crowd thick with debate before he’s even on stage about who in the crowd loves him the most. It’s sweet and passionate and quite lovely. Last of the English Roses stands out tonight, and he turns The Libertines’ You’re My Waterloo into an anthem. The Peter Doherty we have learned to be frustrated by confuses us in a wonderful way, and it’s great to see.