Liverpool International Festival of Psychedelia has revealed Ride‘s Mark Gardener will head up a new ensemble for the Baltic Triangle based two day festival.

A Pure Phase Ensemble will see Gardner join a new collective cast who meet annual in Gdansk with The Wytches, The Veldt, Eagulls and Gwenno joining already announced headliners The Horrors and Super Furry Animals.

Other acts joining the bill are La Luz, Muscle and Marrow, Ulrika Spacek, Has A Shadow, Vaya Futuro and Lorelle Meets The Obsolete.

All of whom join a line up which Getintothis previously reported includes the likes of Kikagaku Moyo and Minami Deutsch from Tokyo, NAWKSH from Taipei and Prairie WWWW from Karachi plus Demdike Stare Liverpool’s The Stairs, Cavern of Anti-Matter and Dungen.

Other draws include the likes of Silver Apples and veterans Acid Mothers Temple.

For the full daily breakdown and to watch a new trailer see below. 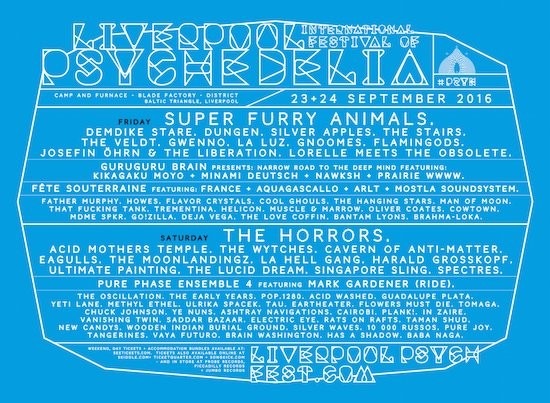