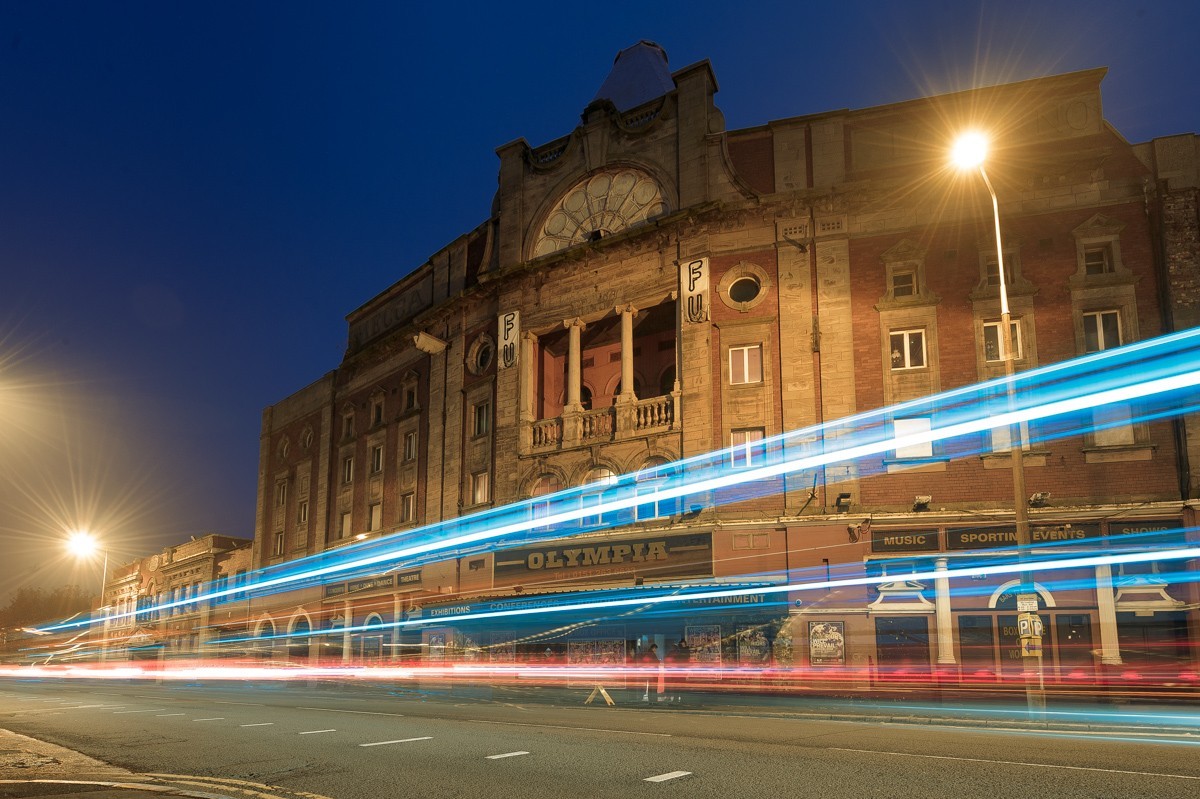 Playing host to Tame Impala, New Order and this week Foals, Liverpool Olympia is firmly back on Merseyside’s live music scene, Getintothis’ Adam Lowerson and Simon Lewis went behind the scenes to see what makes the building special.

“We do a few music events, but we should definitely do more as it’s the best music venue in the city,” said Chris Zorba, owner of the Liverpool Olympia. “If we can have one big concert a month, it’d be great to have that. If you ask anyone who has been to any of the shows here, they all give great reviews, atmospherically it’s definitely the best venue around.”

The venue, along with next door’s Grafton Ballroom, has been under Zorba‘s family ownership since 1990 when they purchased the properties from Mecca Leisure. And while The Olympia is one of the oldest and biggest concert halls in Liverpool, with a fascinating history and glowing reputation, it rarely plays host to live music events. It feels strange to say it of a theatre more than 100 years old, but the Liverpool Olympia is still somewhat of a hidden gem.

Yet all this could be about to change.

The interior of the building itself is simply stunning, and far bigger than it looks from the outside on West Derby Road. It’s brimming with history and nods to its past, with the intricate details in the architecture – such as the ornate elephants and many other animals carved into the walls – acting as a reminder to the Olympia‘s past as a circus venue in the 1910s.

One of the most surprising features of the building and a big part of its history is actually a bit of a secret to the general public hidden underground beneath the theatre’s wooden dance floor. The legendary ‘elephant pit’, which is said to have once been the home to not only the elephants and lions used in the circus, but also a 2000 gallon water tank which was lifted up through the dance floor for shows involving seals and other sea life. There’s no actual evidence of this in the building, and it all seems a bit high tech for the early 1900s, but when you see the size of the ‘elephant pit’ where this tank was supposedly kept, it’s easy to believe it.

The dark, cold, concrete space is huge, and when you first walk in it’s hard to believe that you are just underneath the beautiful room that is the Olympia. The basement is no longer in use, but is said to have once featured a tunnel to a hotel across the street which was used to smuggle huge stars such as Harry Houdini into the building without the worry of being mobbed by screaming fans.

Read our review of Tame Impala at the Liverpool Olympia

The Olympia has served many uses over its 110 year existence, having originally been opened by Moss Empires as a theatre in 1905. Zorba told Getintothis, “It started off as a theatre and was then a circus in the 1910s with the notorious water pageants and the elephants which you’ve seen down stairs. There’s an old projection room which is now used as an executive box, that was used for a cinema in the ’20s, before reverting back to a theatre.

“It closed during the war as an ammunition site. Luckily it was never bombed, if the Germans had known it was an ammunition site i’m sure it would have been. After the war it opened up as the Locarno Ballroom. You had a lot of artists playing here until it closed in the ’70s. Mecca owned it from the war believe it or not, so it was a bingo hall in the 1970s for a few years before closing again, then used for bingo again in the ’80s, closed again before we finally bought it in 1990.”

With such a colourful and varied history, the Olympia is bound to gain a lot of interest. Having been designed by architect Frank Matcham, various societies and fans of his work often pay visit to the building, however some of the interest it receives is slightly unwanted and out of the ordinary. Most Haunted, notorious ghost hunting reality show drivel have previously expressed an interest in filming in the Olympia, with other companies also enquiring about putting on ghost hunts in the old theatre, but as Zorba says, this isn’t something that has ever interested him at all.

He said: “We get quite a lot of companies that want to do theme nights, and ghost tours, but it’s never something that has been financially viable for us as a venue, we’ve never pursued it.”

Nowadays, the venue is the home to a whole host of different events from boxing, MMA, wrestling and music, and has put on shows from the likes of Robert Plant, Miles Kane, Placebo and Damon Albarn’s Africa Express. It has been so impressive as a wrestling venue in fact, that TNA featured the building on a recent video game as a playable arena.

Zorba added: “After the WWE they’re probably the biggest. They did two sell out nights here, but since then they’ve only ever done arenas. They used all the pictures that they took to make a CGI copy of the venue. So not many places in Liverpool can boast that.”

Tame Impala at the Olympia

While events like the wrestling and boxing remain ever popular and a big crowd pull for the venue, Zorba is very much looking to push the Olympia as one of the main music venues on the Liverpool circuit.

He believes, however, that there is too much competition in the city, and it’s hard for the likes of the Olympia to compete when it receives no funding. “It’s a bit of a hidden gem. We haven’t had the millions or lottery money that The Empire and The Philharmonic have had, they’re still spending lots of money on these places. I don’t know how many times they have to keep doing these places up.

“I just think Liverpool for a small city has too many venues, there’s loads popping up like Camp and Furnace, the University, the Royal Court, the Echo Arena and Echo Two, and obviously the Philharmonic and the Empire. So there’s a lot of venues for a small city, but we’re a great place. We’re just a mile from the city centre, we’ve got good parking and are around that 2000 capacity, it’s a good space and a lot similar to the Apollo in Manchester.”

There does seem to be a gap in the market for the Olympia though, and as Zorba mentions, it is a similar size and feel to that of the Manchester Apollo. The current run of bands performing at the venue, which includes Tame Impala, Foals and New Order, who return having been the first band to perform in the theatre since it reopened, are big hitters with Foals and Tame Impala both upgrading to vast arenas in 2016.

The Olympia is somewhat a stepping stone venue. The place that these bands can play before they reach arena levels, something which Liverpool is arguably currently lacking. It oozes character, is in a good location and boasts fantastic acoustics, something which anyone that attended the sell out Tame Impala show earlier this year can vouch for.

For the future of the venue, Zorba has lofty ambitions, and along with the forthcoming Foals and New Order gigs, there are several other high profile shows soon to be announced for 2016. But it relies on the big crowds that these bands bring, and is hoping to start putting on more.

“We’ve got to keep busy, we have good months and we have quiet months in like January and February. We get our fair share of the boxing, the mixed martial arts, so hopefully when music promoters see the pictures of stuff like that they’ll see that this is definitely a venue for them to start using.”

All the elements are there for the Liverpool Olympia to thrive once again. And if, as expected, the upcoming shows leave fond memories in the minds of those attending, we’re sure that it’s only a matter of time before the stunning, ornate building will become one of the main players on the Liverpool music scene.

Tame Impala at the Olympia

Tame Impala at the Liverpool Olympia