With a huge event that looks great on paper, Getintothis’ Shaun Ponsonby finds LIMF’s opening event a bit of a mixed bag.

Well, that was a long night.

We hope that doesn’t come across as too facetious. We assure you it’s not supposed to. It’s just a fact. It was a bloody long night!

Entering St George’s Hall not long after 6pm, we were greeted by regular Soul4Soul DJ DJ2Kind, playing a relaxed mix of funk and soul to set the scene, as folk mingled and bantered with each other. It was a nice summer’s evening, and the vibes were wholly appropriate.

BBC Radio Merseyside’s Ngunan Adamu eventually appeared to introduce local favourite Sophia Ben-Yousef. The song was maybe a little dour to open such an event, but it was a nice performance.

Gil’s son Rumal Rackley then did a little speech and introduced the man of the hour; Malik Al Nasir and his band the OG’s. Tonight is Nasir’s baby. His band were genuinely great, as he delivered poetry in a very Gil Scott-Heron way. But two things became apparent during his performance.

Firstly, the venue was inappropriate for the event. The cavernous build of St George’s Hall meant that the reverb created by the hall’s acoustics made it nigh on impossible to decipher what was being played.  This was even referenced on stage by Garry Christian of The Christians, who otherwise surprised this writer with a ruddy good set. We can’t even begin to describe the sound to you, but let’s just say it was arguably the worst sound we’ve ever heard at any gig we’ve ever seen, other than the time we accidentally walked in on Take That.

Secondly, everybody played just a little too long. There did come a point of fatigue with every act playing between 45 minutes to an hour, given the amount of people who were playing. Even though everybody played well and engaged the crowd. Probably the only authentic British reggae group of their time (UB40 can suck it!), Aswad came on around 9.45 and played an hour’s set that went down wonderfully. When they finished, Craig Charles immediately started up his DJ set for an hour which, mainly owing to Charles’ infectious enthusiasm, gave the proceedings a bit of a jolt.

Finally, Talib Kweli, replacing the initially announced Yasiin Bey (AKA Mos’ Def) had the clearest sound of the night, which isn’t saying much. We didn’t leave until around 1am. Which would be fine on a weekend. But it’s a school night, and by the time Kweli finished his genuinely energetic set, the crowd had petered significantly. By midnight there were maybe ten rows left.

Which is a shame, because let us be abundantly clear; everybody played brilliantly. Let us also say that we genuinely enjoyed ourselves. But whereas it looked great on paper, it was just good in reality. A few tweaks – shorter sets, better acoustics, either an earlier finish or a weekend – and the bar could have been raised.

Still, kudos to Malik and LIMF curator Yaw Owusu for the ambition of the event. Despite the problems, it was still good night overall. But just remember; you can have too much of a good thing.

Rumal Rackley at LIMF 2015 for the Revolution Will Be Live 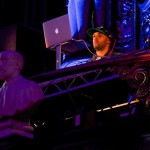 Craig Charles DJ’s from a church organ at LIMF